Author of Himself: Reading Shakespeare Afresh

We’ve made too many assumptions. 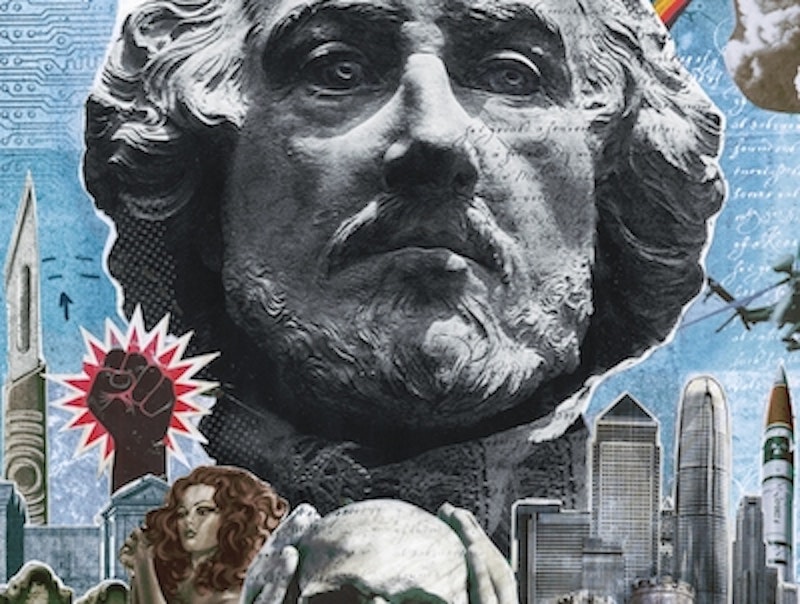 The first time I saw The Matrix, the dialogue bothered me. I almost walked out of the theater when Switch said, to Neo, “Listen to me, COPPERTOP!” Now that I own the film, however, I get along with those idiotic moments. I’ve grown numb to them, even though they’re still bad. Therein lies the problem.

What I’ve done with the Wachowskis, we’ve all done to Shakespeare. We’ve read him too many times. We’ve written too much about him. We’ve read too much into him, making too many assumptions. As a result, this writer we think we know has gradually become a conglomerate fiction. Instead of evaluating him honestly, as a craftsman who had to sacrifice some things in order to achieve others, we succumb to magical thinking.

To wit: Shakespeare is supposed to be both a sublimely eloquent writer and a master of characterization. “The playwright’s voice is many voices,” writes critic Marjorie Garber; educator Jack Welch clarifies this as “his power of creating personality through diction,” which is “the essence of his genius.” (Note to the reader: You knew it was only a matter of time before Shakespeare’s genius got mentioned. I promise it won’t come up again.)

However, when eloquence and authenticity make competing demands on him, Shakespeare never hesitates to write exquisitely beautiful verse. The exceptions prove the rule. When one of his characters is completely prosaic, or foolish, it’s because they’re mere functionaries—props, in essence—or comic relief. Everybody else outdoes themselves. Hamlet is known for his soliloquies, but he’s no more wonderful than Bottom at the end of A Midsummer Night’s Dream. “I have had a most rare vision,” Bottom declares. “I have had a dream past the wit of man to say what dream it was.” Then Shakespeare, having just proven that Bottom is a poet, incongruously crams his weaver’s mouth with a fresh round of goofs: “The eye of man hath not heard, the ear of man hath not seen, man’s hand is not able to taste...” and so forth. Thus Bottom ends the play as an airy nothing; he’s a patchwork of different, almost contradictory verbal effects. In this regard he is much like Polonius, who’s either crisp and quotable (“To thine own self be true”), or an insufferable babbler, depending on the scene.

We’re so used to Polonius that we rationalize Shakespeare’s inconsistencies away. Either “to thine own self be true” gets roasted as a pompous and naive maxim, which it certainly is not, or else such nonsense as this (quoted below, about Hamlet) is dismissed as a side effect of pandering:

“Mad call I it, for, to define true madness

What is ‘t but to be nothing else but mad?”

...which Polonius would have never said, if Shakespeare hadn’t forced him to. Panderers who attain high office are good at what they say. Here, though, Polonius is so annoying that the Queen begins making fun of him (“More matter, with less art,” she quips).  Shakespeare sees the chance for a joke, and he pounces on it, even if it puts his courtier out of character.

I’m focusing on these minor characters, and their moments of legitimate poetry, because they give the lie to a reading of Shakespeare’s major characters that’s largely gone unchallenged for 200 years. If we forget how well-spoken Shakespeare’s throwaways and sidemen tend to be, then we (in turn) overrate the verbal acumen of his protagonists and villains. This mistake led G. W. F. Hegel, the German philosopher, to call Shakespeare’s characters “free authors of themselves.” It’s a catchy misreading that Shakespeare professors continue to passionately avow.

The late Harold Bloom was one of the louder voices in this chorus, especially on the subject of Othello: “Iago is nothing at all, except critical; there can be no inner check when the self is an abyss. Iago has the single affect of sheer gusto, increasingly aroused as he discovers his genius for improvisation... the plot of Othello essentially is Iago’s plot, [and] improvisation by Iago constitutes the tragedy’s heart and center... Iago ‘stabs men in the dark to prevent ennui.’”

This wondrously incorrect summary, which is a linchpin of Bloom’s bestselling study Shakespeare: The Invention of the Human, conveniently overlooks the way the play ends—with Iago on his way to the gallows, which was not a part of his plans. In Bloom’s goofy version of Othello, Emilia has no agency, Othello has no agency, and Desdemona’s death by strangulation is somehow far from the “heart” of the drama. All of that is clearly wrong, but it steadies the faith of Bloom’s reader in a certain cherished fantasy, one that Shakespeare himself both understood and abhorred: a conviction that whenever the right words are put to the right melody, reality bends.

Iago isn’t the only magician whom we applaud for giving birth, with potent words, to a brave new world. There’s also Richard III, as performed by Marjorie Garber. Rejecting Sigmund Freud’s interpretation of the character as “something we find in ourselves as well... reason to reproach Nature and our destiny for congenital and infantile disadvantages,” Garber retorts that “[Richard] is a Machiavel because it amuses him, and because he likes it.” She dismisses the king’s raw psychic wounds as functioning “more as an excuse and as a metaphor than as a convincing interior motivation.” Richard, apparently, has to convince us that he’s really been twisted by adversity and physical deformity; to the modern, sophisticated reader of Shakespeare, it’s far more likely that he’s psychopathic for no reason at all. (If only Richard himself could read his critics! He’d be delighted to learn that being deformed is just a metaphor, and nothing to be seriously concerned about.)

It’s really odd, when you think about it, to live in an era when Richard III is a sadist making cunning excuses, but Shylock is a helpless, almost chemical reaction to the persecution of Jews. After all, what makes Shylock’s ressentiment more persuasive, more exculpating, than Richard’s—or Don John’s, or Edmund’s? Nothing but the fact that it touches us more nearly, right now. Richard III is no more of an aesthete than Shylock (especially given Shylock’s baroque, curiously carnal demand for a “pound of flesh”).

Likewise, Hamlet isn’t more of a wit than his gravedigger. He isn’t more lucid or more introspective than his enemy, Claudius, when Claudius confesses in the chapel. The key to Shakespeare can’t be found by sifting each character’s diction, and siding with whoever seems to have created themselves most freely. Freedom isn’t Shakespeare’s main concern, as a matter of fact. He takes it pretty much for granted.

Instead, what Shakespeare is really getting at, with every one of his characters, in every one of his plays, are the limits of our moral imagination. The motivating circumstances that drive his characters are painfully transparent. Nobody talks about Lady Macbeth’s dead child, or Romeo’s broken heart (remember “Rosaline”?). We don’t like feeling pity for Lady Macbeth, who is more fun if she comes on like a bat out of hell. We certainly don’t want Romeo to be a shallow teenager mooning over his crush-of-the-week. Better to imagine them taking action in a vacuum, is it not? Yes, unless you can instead perceive how far their improvisations, to use Bloom’s insightful term, carry them beyond the binds of circumstance.

For Lady Macbeth to transform her grief into unhinged ambition is actually fairly remarkable. For Romeo to become more than a callow, lovesick “bro”—because of what happens when he finds himself requited—is downright miraculous. Shakespeare’s characters are too eloquent, by far, to hold a mirror up to Nature. They’re all versions of himself, welded onto stereotypes, frequently with mixed results. So be it. Through them, Shakespeare passes on glimpses of something that is not quite airy fantasy, or bracing fact, but a place of wisdom in between.

Lear murders Cordelia because he can’t imagine retiring. Beatrice spurns Benedick because she will not beg to be acknowledged as his equal. Romeo kills himself because he can’t fathom his lady’s endurance or ingenuity. But we are granted a most rare vision because Shakespeare tests out these limits. I’d never willingly trade what I’ve learned from Shakespeare’s vaulting, Icarian poems for a plurality of less enlightened, more familiar voices. So I have to remind myself to hear Shakespeare as he really is, summoning enough patience to lift the veils of habit.