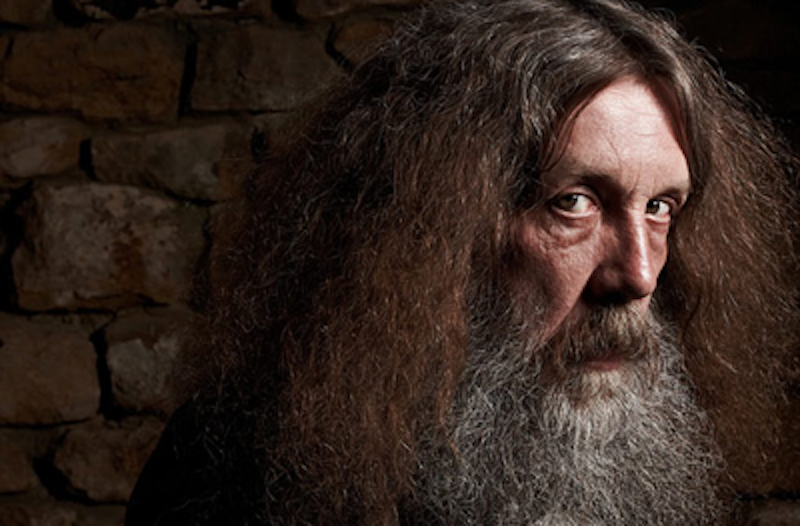 The following is presented with apologies to the Onion and thanks to Slovobooks, the blog that recently sent Alan Moore a series of touchy questions and then published Moore's detailed written responses.

Alan Moore, 60, co-created and wrote the landmark graphic novels Watchmen, From Hell and Lost Girls, among other works. He is a man of sometimes frightening intensity.

Dear Comic Book Cult Figure Being Seriously Pissed: I'm a first-time renter out of college and my landlord wants to be paid in advance. What are my rights here?—Wait a Minute

Dear Wait: I remember some several months after my announcement of the fractal mathematics-based Big Numbers, or The Mandelbrot Set as it was originally known, I had someone call my attention to a Mandelbrot set that had been spuriously shoehorned into the plot of an issue of Grant Morrison’s superhero comic Animal Man.

Dear Comic Book Cult Figure Being Seriously Pissed: My neighbor's bird feeder is attracting jays and other unwelcome noisemakers. How can we draw a better class of bird?—Pipe Down

Dear Pipe: For 30 years I’ve had to patiently endure the craven and bitchy hostility of someone who, when I bother to think of him at all, I think of as a Scottish tribute band. While he is clearly not the only reason why I have come to feel actual revulsion for the greater part of today’s comic world, he’s probably done more than any other single individual to foul its atmosphere and make it unbreathable with his ongoing reeking incontinence—and that, believe me, is in a field where he has enjoyed a great deal of vigorous competition.

Dear Comic Book Cult Figure Being Seriously Pissed: My mother won't get off my back about the dresses I wear. But when she goes out—boy! How do I call her on this? —Look at You

Dear Look:  Moving on to someone whose name I recognize and whom I have at least spoken to over the phone on one solitary and never-to-be-repeated occasion, I note that one of the more vociferous complainants in this borderline-remedial debate is the alleged journalist Laura Sneddon… I learned that in an edition of the Independent released roughly a week before the book itself Laura Sneddon had gleefully related all of the major plot developments and denouements, including the death of Allan Quatermain and the identity of the “Moonchild” or Antichrist figure that we’d been carefully building up references to over the four or more years that we’d been laboring on that third (and longest) volume of The League… I hope that everyone will understand that I really don’t see any convincing reason why I should invite any continuing contact with what appear to me to be polluted and toxic sources.

Dear Comic Book Cult Figure Being Seriously Pissed: Why are supermarket aisles that shape? Is there anything we can do?—Reality Check

Dear Reality: To this end, as with Sneddon’s previous venture which resulted in the severing of connections with the Independent, it appears that I must extend these sanctions to any other publication or institution with which she claims to be associated… As already stated, any publishers, friends, artistic collaborators or other close associates of Grant Morrison or Laura Sneddon should not approach me in future. Further to this, any periodicals or institutions which publish or have published interviews with Grant Morrison should similarly not attempt to contact me.

Dear Time: Batman, that dull and wearyingly angry character... Batman fandom, this slightly airless world of interconnected back-bedrooms... Modern superheroes seem to mainly function as cowardice compensators for a number of their conflict-averse creators and readers... The origin of capes and masks as ubiquitous superhero accessories can be deduced from a close viewing of D.W. Griffiths’ Birth of a Nation...

Dear Change: If my comments or opinions are going to provoke such storms of upset, then considering that I myself am looking to severely constrain the amount of time I spend with interviews and my already very occasional appearances, it would logically be better for everyone concerned, not least myself, if I were to stop issuing those comments and opinions… To this end, once I’ve satisfied my current commitments, I shall more or less curtail speaking engagements and non-performance appearances, certainly including all offers to talk on comic-related matters or in a comic-related context. Likewise, while I shall probably still do a couple of rigorously-selected interviews and perhaps a limited signing at the launch of any new books (since my worthy and excellent collaborators and publishers shouldn’t be disadvantaged in terms of publicity, although for my own part I’m not that bothered), it would be much more convenient if I just rejected requests for interviews...

Confidential to Waiting and Hoping: On the final point of my reference to Gordon Brown as a bipolar cyclops, I concede that this may have been thoughtless and I apologise for any offence unnecessarily caused by my remark. I have good friends who suffer from bipolar disorders.

—Ask a Comic Book Cult Figure Being Seriously Pissed is a steal of the Onion's “Ask a...” feature, which usually concludes with boilerplate saying the supposed column appears in more than 250 papers nationwide.