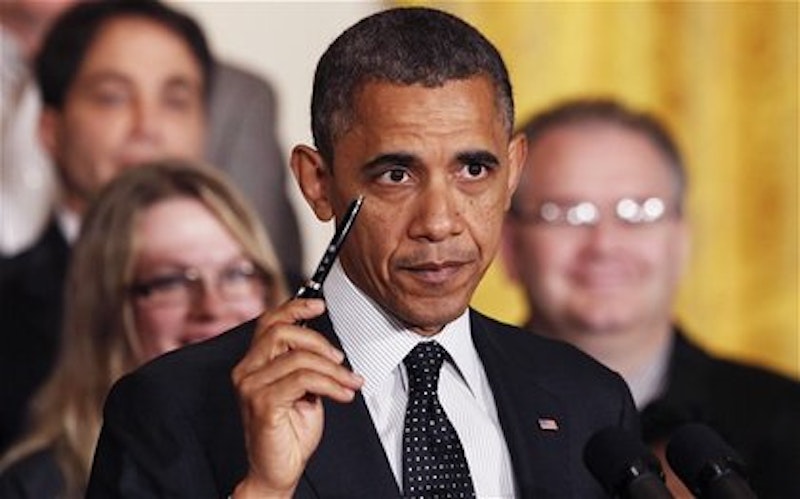 My fellow Americans, we face innumerable challenges as a nation. Income inequality threatens our collective well-being. The Middle East is in chaos. To ensure that the economy doesn't spiral into free fall, both political parties will have to come together in the next several weeks to craft common-sense, bipartisan solutions that benefit everyone, regardless of class or station. We must keep automatic weapons out of the hands of criminals and mentally unstable persons, rebuild crumbling institutions and infrastructures, and ease mandatory-minimum sentences for drug offenders. The minimum wage should be increased. Something will have to be done about immigration, sooner or later, and China's ambitions must be managed and tempered. It's a complicated world, and these are complicated times we live in; thinking about all of this, day after day, can be enough to make anyone's head spin, particularly given the current political climate here in our nation's capital. But I don't want any of you to worry too much; just remember, I've got a pen, and I've got a phone.

Now, the pen may be mightier than the sword, but this pen isn't anything special. It's a dark blue click-pen, with "President of the United States of America" stamped on its side, with a miniature replica of the presidential seal. That isn't as impressive as it sounds; there are millions of these pens, made in Korea, and you can buy one at the White House gift shop for almost nothing. What's fun is that if you hold the pen in the center with the tips of two fingers, and wiggle the thing, you can create the illusion it's made out of Silly Putty. I do this at least 50 times per day. You can amuse yourself with this game, too, but not with this particular pen, because this pen is mine. You'll have to get your own. The phone—an iPhone 9 prototype, is considerably more impressive; because I agreed to sign a bunch of nondisclosure agreements about the advanced technology involved, I can't say much more about it than that, but what's interesting is that a gag order offers its own kind of freedom. Which is to that when I'm using this phone in any of the myriad, classified ways available to me, I am no longer living in 2014—I'm living in 2018, which is crazy; I've already fouled up the dates on a number of Executive Orders and baffled several members of my inner circle with idle chatter about what an amazing job President Christie is doing. Still, there are worse problems to have.

The other day, John Kerry and I were tread-milling in the White House gym, as we're wont to do most Tuesdays, discussing vital national security matters, when my iPhone rang. The ring was the theme song from Django Unchained, and after a few seconds I started to sing along. Kerry stared at me a minute, then asked, "Mr. President, aren't you going to answer that?" I shook my head no, mouthing "Boehner." The Secretary of State laughed knowingly, and began to sing along with me, and then the music stopped cold, and the call ended. We stared disconsolately at the phone for a long moment, C-SPAN playing quietly in the background, until John Boehner rang me back, and we began again to sing along, this time managing to make it through nearly two and a half plays before voicemail kicked in or Boehner gave up. Kerry lit up a spliff and we watched the sun set until it was time for cocktails. I never did call Boehner back. Fuck that guy.