The Power of Spirituality

What does it mean that a priest who disagreed with the Pope baptized me? 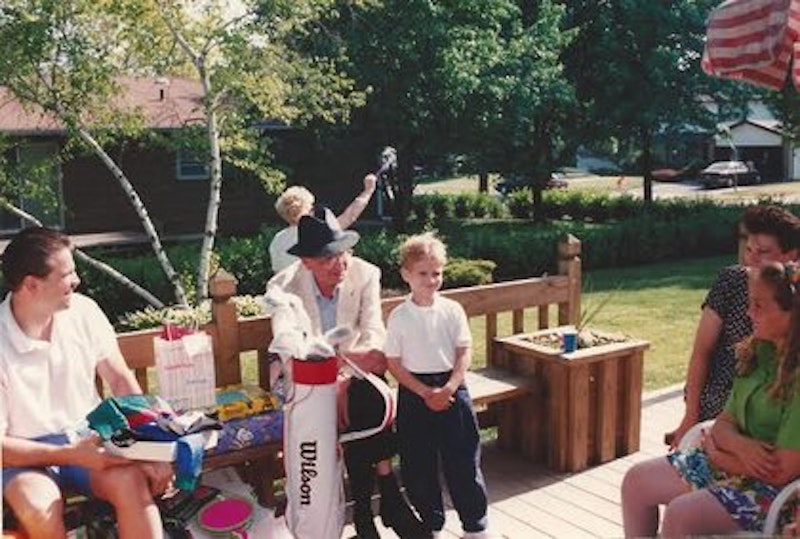 I turned five in 1992. I don't remember much from that June day, but I did manage to keep one gift. Father John Dedek gave me my first set of golf clubs and promised to hit the links with me when I was ready. He died before I could play past the putting green, and before I could keep up with the conversation. You know, the golf course chat about God, evil, and what we're supposed to make of it all.

Okay. I'll admit theology isn't as ordinary as the back nine, but I do regret not having the chance to learn more from that old priest. Fr. Dedek was the pastor of Saint Julian Eymard Catholic Church in Elk Grove Village, Illinois when I was growing up. He administered my childhood Sacraments: Baptism, Confession, and Communion. Dedek didn't normally come to parties, my grandmother and Dedek's longtime Director of Religious Education for St. Julian, recently told me, but he managed to come bearing gifts to mine. "People got the wrong opinion of him," Grandma said, hinting that there was another side to my childhood pastor.

Fr. Dedek, nicknamed "Sam" by seminary buddies for his resemblance to the Humphrey Bogart character Sam Spade in The Maltese Falcon, was no ordinary parish priest. In fact, I probably wouldn't have known him had it not been for Charles Curran—yes, that Charlie Curran. Dedek taught at the seminary and hobnobbed with other intellectuals at Catholic Theological Society meetings. At one of these get-togethers, Fr. Curran recommended Dedek apply for a job in the theology faculty at the Catholic University of America.

Curran himself had just been reappointed after a battle with the University's trustees. The bishops hoped that Curran and his dissenting ideas about contraception and sexuality would go away by allowing his contract to run out. The 1960s college campus erupted and bishops cowed to student demands. Dedek's moral theology wasn't exactly consistent with Humanae Vitae, either. "The major point [of Dedek's scholarship]," Fr. Curran recently told me, "was that Saint Thomas Aquinas admitted the possibility of exceptions to Natural Law. And therefore, these weren't intrinsically evil acts." The acts Curran and Dedek referred to were contraception, sterilization, and pre-marital sex, among other issues still hot in the Church.

Dedek, however, was not going to be another Charlie Curran. Before University trustees could render a decision on tenure for Dedek, then-Archbishop of Chicago John Cody phoned the controversial priest. Curran recalled in his memoir Loyal Dissent how Dedek broke the news that he would be leaving. "Dedek came into my room with an impish smile on his face. 'I have just taken the bribe. Cardinal Cody called and offered me a parish in Chicago, which I accepted.'" Fr. Dedek was appointed as pastor of St. Julian in May of 1979, giving University trustees a reprieve from another tenure fight.

I thought of Fr. Dedek during my own campus mêlées at DePaul University in Chicago. DePaul, as with many Catholic institutions, seemed to favor "diversity" over its Catholic identity. With a small, but ambitious group of friends I started a conservative student organization that for four years led campus conversations on a variety of issues. We even dedicated one week to reviving DePaul's Catholic identity by hosting a series of lectures about the Catholic intellectual tradition. We were obnoxious at times, but we sparked debate—something that irked University faculty and administrators.

I sometimes asked myself: What would Fr. Dedek think of my activism? Would Charlie Curran’s friend side with me or the faculty? Should I stay at DePaul and continue the fight? Grandma told me Dedek's advice would have been to "Let your heart tell you what to do." At first blush, it seems quite relativistic, but Grandma admitted that she's "not sure he'd give that advice to everybody." I probed deeper: What does it mean that a priest who disagreed with the Pope baptized me? Heard my first confession? Gave me Communion? According to Saint Augustine, it doesn't matter. "The spiritual power of the sacrament is indeed comparable to light," the Saint once wrote, "those to be enlightened receive it in its purity, and if it should pass through defiled beings, it is not itself defiled."

Phew! Augustine's words counseled me again when I recently read that the bishop who confirmed me in the faith, Thomas Curry of the Los Angeles archdiocese, was forced to resign his public duties due to an alleged cover-up of sexual abuse by priests under his tutelage. Dedek didn't live to see the height of the sexual abuse crisis in the Church and I shouldn’t speculate as to how he might have responded, but at least my Sacraments are still valid. I guess I had some strange luck with priests early on.

After a recent move, I found some old photo albums—and the clubs. Mom tells me Fr. Dedek left after staying a short while at my party, but not before she snapped a few pictures of him presenting me with the irons. There he was, absent a Roman collar, with cigarette in hand, and fedora well-placed, smiling as I posed next to him and the clubs. I'm smiling, too, completely unaware then of the side to Fr. Dedek I'd later wish was still around for a debate, a drink, and a few holes.