Art Need Not Be Edgy

So long as it's about community—no matter how self-effacing, maudlin and bourgeoisie that community is. 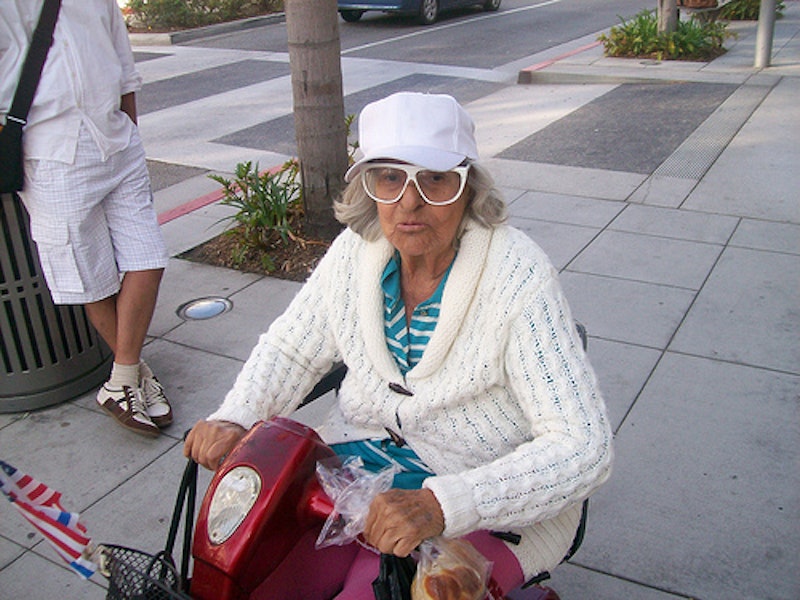 As a child, I was told that I mumbled.  And, as kids will, I believed it—and went on believing it well after I had left home. In fact, I don’t think I fully realized this deception until well into adulthood. I was 28, I think; my parents had come into Chicago to visit and we were having dinner in a restaurant with a cousin and my wife-to-be. My cousin showed up late, bearing a relatively spectacular bit of news: My grandmother had caught her eye on a car door and was in the hospital. My mom sat up straighter in her chair, lifted her chin, and with that east-coast Jewish nasal edge that sounds like a jackhammer pulled across a blackboard, bellowed out,  “Holy Fuck!”

As the restaurant plunged into shocked silence and my eardrums reverberated, I experienced a kind of epiphany. It wasn’t that I mumbled, I suddenly realized. It was that my parents were, officially, the Loudest People on Earth.

They’re not really, of course. Or, rather, it’s not just them, but rather the Ashkenazi in general. I had ample opportunity to realize this in the run-up to a recent concert at Chicago’s Old Town School of Folk Music. While eating dinner, my wife and I learned, oh, just heaps, thanks, about the two lovely couples at the next table: married for 40 years and with relatives in Florida and at odds over whether it was really fair to say that Maury had had nothing to do with his kids, or whether that statement just couldn’t be allowed to stand. And all the while I knew as sure as my boy’s my bubeleh that they were going to the same damn concert we were.

And what was that concert, you ask? Klezmer, perhaps? In John Zorn’s wet dreams, maybe. Back here in the U.S., though, American Jews aren’t European, but American … and what better way to be American than by listening to the quaintly strummed tunes of your homeland? I’m talking about performers like Odetta, Pete Seeger, Arlo Guthrie—collectors of songs, purveyors of social justice, and bearers of banjo-fuls of mitzvahs all around.

So, yeah, we were going to the Old Town School of Folk Music for an evening of folk revival nostalgia—and, at least for me, the nostalgia was almost crippling: the nervous, semi-professional opening announcement; the raffle; and the jovial, inevitably bewhiskered volunteers with nametags. It was like I had wandered through a hole in my head into some sort of archetypal JCC. Or back to my Jewish summer camp, where the cantors played the songs of Joni Mitchell and all knew Harry Chapin personally.

But at the Old Town School, opening act Caroline Herring explained she hailed from Mississippi. But I bet she knew Harry Chapin, too, and that he recognized her as a Semite-sister of the soul. My wife—whose family is from Appalachia and whose patience for precious, breathy folk tunes is, shall we say, spotty—watched Herring with a mounting horror that exploded quietly but magnificently during an earnestly pedantic desecration of “Long Black Veil.” And, yes, I do know where my wife’s coming from.  But how—I ask you, how?—could I turn up the nose of my forefathers at a woman who name-dropped the Kingston Trio and (with a proud little giggle) Nirvana before launching into a slow, heartfelt version of Cyndi Lauper’s “True Colors.” Or who talked at length about a book titled Black Culture and Black Consciousness by a Jew from Brooklyn named Larry Levine? Or who declaimed, “I’m a white girl from a segregated town / and I’m looking for some answers” to a crowd entirely hushed except for that one person walking behind us talking about their grandson’s Bar Mitzvah? Yes, yes, yes, and also, oy, it was amateurish and self-involved and, yes, again, it is in truly, truly poor taste to mention your yearning desire to be black for the fifth time in the set. But … it’s my amateurishness, isn’t it?  It’s my self-involvement and, God help me, my desire to be black. Is it really so wrong?

My wife assures me that it is.

In any case, Herring finally left and the main act came on—Chris Smither. Smither is not Jewish either, I don’t think, but his dad is a university professor, which is pretty much the next best thing.  Also, he sang a cutesy, blasphemous rag about evolution—red meat for this crowd, obviously.

The thing about Smither, though, is that, while he is a 100-percent bona fide folk revival fossil down to his witty self-deprecating patter (“I love this place. I feel like I’m such an artist”) and the easy liberal jeremiads (“the trickle down will float you up … surprise, surprise, it ain’t so”) he’s also, actually, well, good. His blues-derived guitar playing is a wonder, whether swinging through a dirty Lightning Hopkins rave-up like “Surprise, Surprise” or using a lighter, Mississippi John Hurt-style flow as on “Time Stood Still.” His voice is hoarse, and his mumbled phrasing is remarkably evocative, like Tom Waits with half the booze and twice the brains. Everything, down to the incidental aspects of his set—the way he uses both feet to create barely audible (though mic’ed) percussive rhythms, or the effortless speed with which he downtunes between songs—is done so professionally, and with such unpretentious nonchalance, that it attains soulfulness almost by default. His performance of “Sittin’ on Top of the World,” which closed the night, was near definitive—a slow, almost-dirge where every drawn-out, supposedly carefree line dripped with bittersweet longing. Even my wife liked him. In fact, she bristled a bit when I informed her that he was, indisputably, and despite his many good qualities, clearly of the folk revival. (“I guess I did hear about him on NPR,” she finally admitted reluctantly.)

None of which is to say that Smither escapes the problems endemic to his brethren, necessarily. His humor is witty, but doesn’t have much real bite, and—despite the occasional “Sittin’ On Top of the World”—he rarely tries for emotions much more complicated than self-mockery or diffuse melancholy.  When he sings a come on, he sounds amused rather than dangerous; when he ruefully declares that many “perfectly good songwriters become parents and then spend the rest of their lives churning out maudlin crap about their children,” it’s as a prelude to a maudlin and fairly crappy song about his daughter.

But not all art has to be about being edgy and shocking the bourgeoisie. Sometimes, as Carl Wilson noted, it can be about community, even if that community is kind of, well, bourgeois. My parents would love Chris Smither: his easy liberalism, his easy humor, his deft mastery of someone else’s quintessentially American folk idiom. And they’d be right to love him, because he’s great. The concert was welcoming and gentle. Great children’s music, in other words, much like the first tapes of Arlo and Johnny Cash and the Kingston Trio I listened to on an old cassette deck in the back seat of our station wagon, the songs sometimes drowned out by my mom and dad bickering loudly in front.