Your Native Tongue is a Crime Against the State 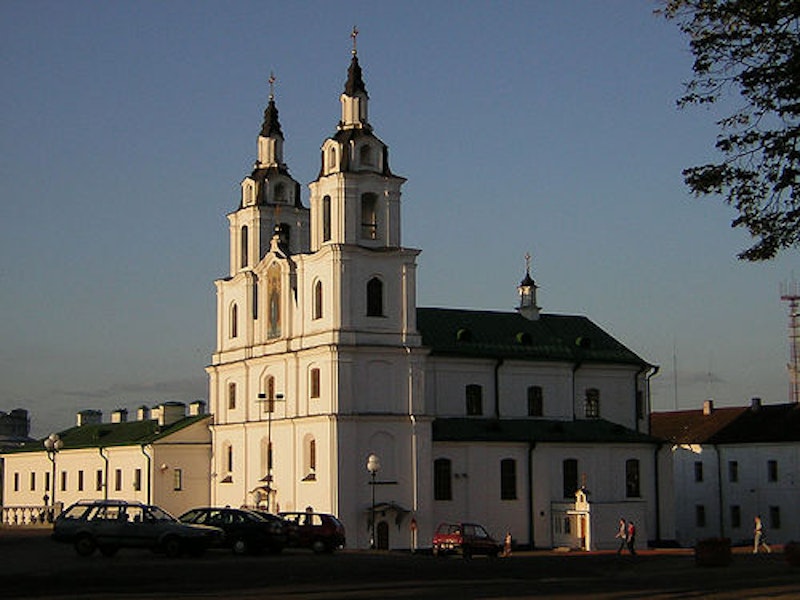 I am sitting on a bus in the no man's land between Lithuania and the Belarussian border, trying not to look overly shady. I don't know if its working—its been a few months since I've spent any time in a barber's chair, and my izro is getting pretty untamed. Before getting on the bus I wrapped a sweatshirt around my journal and stuffed it into the bottom of my bag—the guy I'm going to visit in Minsk tells me the guards are not overly friendly toward journalists. To the best of my knowledge, all of my documents are correct, a privilege which cost me about $130 at a travel agency near the Vilnius bus-station. Up till this point in the journey I've barely even had to flash my passport, slipping across international boundaries with nary a care in the world.

But then a lot of things about Belarus seem a few ticks out of step with the rest of the world. Composed of that portion of Russia which was under control of the Polish-Lithuanian Commonwealth, a half-millennium during which the Belarusians developed a language and culture which is slightly, although distinctly, different than their big brother to the east, Belarus suffered in the customary way during the length of communist rule, and their history post-1989 hasn't been any better. A brief period as a republic gave way in the 90s to the reign of President-for-Life Alexander Grigoryevich Lukashenko, a mustachioed, buffoonish dictator whose rule has been marked by the rapid and continual devaluation of the currency and general, widespread corruption. His attempt to steal the 2006 presidential election resulted in a massive protest in the center of Minsk, the so called 'Jean' or 'Denim' revolution, a revolt which disintegrated when state police intervened in riot gear, subduing the dissidents and jailing the leaders of the opposition. The intervening years have seen little improvement in the life of the average Belarusian, and the economic collapse hit them as hard as hard as it has the rest of the world. In short, it is not a place where one would expect an entry-fee to be required.

Back on the bus my fellow passengers are lining up to disembark, and I follow them in the way I have come to follow anyone who seems to have some vague idea what they're doing. The whitewashed customs building we walk into appears to have been built with the expectation of accommodating a radically higher tourist population than the nation now enjoys-of the 20-odd official checkpoints lining the walls only one is open, lit with a flickering bulb, the rest of the building kept dark to conserve energy. As I stand in the queue my hands are getting sweaty, and long-held images of soviet border crossings flit through my head, bearded men shaking through my bag for kopecks, hours spent in concrete cells for perceived infractions. All of these are dashed when I finally make it to the front of the line and meet the customs official, a Belarusian girl in her mid-20s who would go from being merely pretty to dramatically beautiful with about $2000 worth of dental work. She smiles at me like she knows she shouldn't, helps fill out the one part of my entry visa I messed up on and waves me through.

This proves an excellent introduction to the two most compelling part of Belarusian life-the existence as the last police state in Europe, and the almost inconceivable beauty of their female populace. I have a sneaking suspicion that this last is the reason for the first, that the Belarusian powers-that-be got together and, recognizing the 200-proof purity of their feminine gene pool, conspired to keep any of the native talent from leaving, and set the walls coming in as high as possible. Whatever the reason, Belarus is a fascinating place, mixing Soviet-era totalitarianism with a modernized population playing World of Warcraft and watching bootlegged South Park reruns. My host, Alaksaiel, is a fairly amazing character, the sort of person you could only imagine running into in Eastern Europe. Loscha, 23, has survived cancer and the attentions of the secret police, due to his support of the opposition. After a night spent in a cheap hotel to get my visa registered (and let me tell you, cheap hotel means something different here in the former Soviet Union than it does in the US) we meet at October Square in the center of the city, and he takes me on a tour of his hometown.

Minsk (Mensk) is a prettier city than I expected. Even by the standards of Eastern European capitals, it suffered quite thoroughly during WWII, to the point where virtually nothing exists from before the Soviets came in, and the 'Old Town' might more accurately be described as an 'Old Block and a half'. Still, the rebuilding has a certain pleasant Stalinesque grandeur. The boulevards are wide and tree-lined, a break from the congested alleyways of the Baltic metropolises. The streets are immaculate, Scandinavian clean, and on weekdays legions of school children can be found sweeping debris from parks and sidewalks (an activity, I was not shocked to discover, which is a government-mandated part of the day's curriculum). Also, there are basically no churches in Mensk which, while I wouldn't go so far as calling a good thing, saves me the trouble of walking aimlessly into every cathedral I pass, confirming that, yes, this one has a lot of crosses in it.

But what is most interesting about Mensk is indissolubly bound with what is rather terrible about it-the constant, aggravating presence of the Great Leader, shoved into every aspect of the city. Everything is infused with it—trios of guards (for some reason, in Belarus, they always come in threes) patrol every thoroughfare and avenue, and picture taking is, if not outright forbidden, likely to draw unwanted attention. Like every other Slavic capital it is choc full of monuments to the soldiers of WWII, but Mensk also has a statue of Felix Dzerzhinsky, the original head of the Cheka, the precursor to the KGB, a cuddly Leninite responsible for some tens of thousands of deaths.

The newest and most absurd manifestation of Lushenko's obsession with grandiosity is the national library, a massive, hideous structure several dozen stories high (the exact number is impossible for an outsider to determine, as there are several secret floors lodged within the walls) that looks like nothing so much as if some vengeful god took a vaguely cube-like shit on top of an office building. All tourist information insists, utterly incorrectly, that the library's center is diamond-shaped, as if the viewer, and indeed the entire population of the country, is unaware what a diamond looks like. At night it is illuminated like a Lite-Brite, hundreds of thousands of colored bulbs flashing through the evening sky, rendering the edifice (which, during the day, is imposing if not pretty) almost inconceivably tacky.

The natives are uniformly unimpressed with most of what their pseudo-dictator does, and the whole country has a curiously clownish feel-the cracks in the facade are so large as to be impossible to ignore. Never having visited the U.S.S.R. pre-fall, I cannot say whether this is a characteristic unique to Belarus or if all police states seem so silly. I suspect it is some combination of the two. A dictatorship of this sort thrives on dishonesty, and there are always people who refuse to play along, insisting on looking behind the curtains regardless of what it costs them. But on the other hand it probably becomes a lot harder to blind yourself to the madness when the rest of the planet has moved on and you're still operating as a Soviet time capsule.

Still, this paper tiger can bite, and most people in Mensk have lost a finger or two to its maw. Many of Loscha's friends have spent time in jail (15 days is the usual sentence meted out to those wheels which squeak too loud) and the magazine his girlfriend, Kazia, used to work for as a photojournalist has been closed because the government perceived it as pro-opposition (it has since reopened under a related name-the secret police are apparnetly not hip enough to have put the connection together).

It is axiomatic that all actions in a police state are, by definition, political, but I never quite realized what that meant until I made it to Mensk. Rather than pro- or anti-Lukashenko, the populace might better be divided into active and inactive. In a state where, as one Belarussian I met explained to me, "Everything is lies, everything they tell you is lies," interest in anything exposes the vibrancy of the outside world, and the weakness and stupidity of the regime. As a result all activity becomes defiant—either you sit on your ass drinking beer and watching piped-in, pre-censored Russian television or you spit in the eye of the government.

Alaksaiel is a good example of this—he's not a died-in-the-wool revolutionary; there are no Che posters above his bed and he doesn't spout Bakunin. He'd be quite content to put in his eight hours as a customer service representative at the b2b he works for, go home and eat sushi, mess around on Google Wave and go to bed. But such modest desires are impossible in Belarus, or at least they bump up against the will of the government. Alaksaiel's courage, and the courage of his compatriots, consists in, very simply, living their life as they would prefer to, without regard for the will of their would-be masters. It is impossible not to admire them, not to respect their refusal to be worn down to an automaton. In a nation where the very act of speaking your native language marks you as a rebel, and the consequences for rebellion are real, their fortitude is inspiring.

On the train to Kiev I am considerably more nervous than I was coming in. It occurs to me that entering a police state is not nearly as important a step as getting the hell out of it, and unlike on the bus to Mensk I have violated the terms of my visa in at least three ways, anyone of which would be enough to get me stuck. The guard who walks quietly through the corridor is an unpleasant contrast to the bombshell who stamped me in, closer to my initial image of state security. He takes my passport, runs it through a machine and begins to bark something at me. I adopt my idiot foreigner pose and after a few minutes he gives a tired sigh, hands me my back my documents and moves on. Twenty minutes later the train starts rolling again, pulling us into the promised land of the Ukraine, and I bid a final farewell to Belarus, its beautiful woman and brave populace.