Another Newspaper Myth Fades Away

Romantic journalists used to swear by the idea that taxi drivers were unimpeachable sources. Not true, but I’ll never give up riding in cabs. 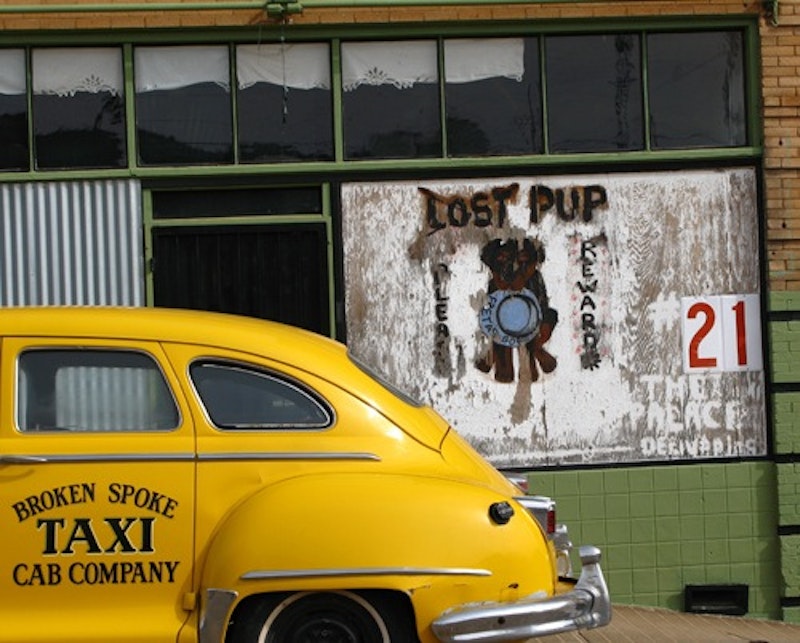 One of the most irritating mid-late 20th century newspaper clichés—sort of a forerunner to The New York Times’ David Brooks’ anthropologic expeditions to Wal-Mart to gauge the pulse of “real Americans”—was the hyperbolic and condescending notion that a reporter could soak up the authentic lowdown on the politics and culture of a city by spending time riding in taxicabs. The drivers, working stiffs to a man, supposedly knew, according to editors in the newsroom, which politicians were crooked or honest, where the best hot pastrami sandwich might be found and the smart horse to bet on that day at the track.

Obviously there was a grain of truth in this legend—after all, ubiquitous clichés often begin with some substance—but as a young journalist who engaged in conversation with cabbies nearly every day, and enjoyed bantering about sports, I almost never whipped out a reporter’s notebook to jot down the wisdom of these purported sages. In reality, yakety-yak drivers were the equivalent of people who make calls to radio talk shows—lots of bluster and opinions, and usually nothing more than that. Mind you, it wasn’t the cabbie’s fault, for this was a sweeping and creepily romantic truism foisted upon them by newspapermen who’d seen Sweet Smell of Success or The Front Page once too often.

This all changed during the late 1980s in New York, and a few years later in other cities, when immigrants with a shaky command of English increasingly dominated the ranks of cabbies, and often a passenger’s most pressing concern was not a tavern recommendation but helping the driver navigate a straightforward path to his destination. And if you arrived either at work or home in one piece, and weren’t the victim of a jacked-up meter, it was a small victory.

So today, as the media industry continues to hurtle into unknown territory—save for the fact that print is dead except as a niche product—the cabbie-as-oracle platitude has passed into the realm of antiquity, not unlike multi-edition newspapers and reading the box scores of baseball games each morning. If an old-timer even mentions this once prevalent cliché to a young journalist just out of college—at least, the few that are lucky enough to find jobs—a friendly roll of the eyes will follow, since today cabbies rarely talk anyway, as they’re too occupied with conversations on cell phones, just like the customer in the back seat.

As a city resident who doesn’t drive—I did as a teenager in suburban Long Island, and had a ball “cruising” all over town, knocking over garbage cans and the like—but upon leaving home for college couldn’t afford a car and just never took it up again, so none of this bothers me much. I take cabs for transportation, not conversation, although on rare occasions a gabby driver makes for very good company. There’s one fellow, for example, who often draws me as a fare and he’s full of opinions about the dismal fortunes of the Baltimore Orioles. We have something in common: years ago, in the mid-70s, I sold beer at the team’s old Memorial Stadium and he somehow maneuvered the lucrative perk of bringing out-of-town players to the Cross Keys Inn, the hotel of choice back then. This is a lot of fun, since we both remember when the O’s were perennial contenders for the American League pennant, so it’s a 20-minute period of harmless nostalgia between a couple of middle-aged sports fans.

Pardon the lengthy digression, for my intended topic here is the question of what cities in the United States qualify as sufficiently cab-equipped, a debate my 17-year-old son and I periodically engage in. He was born in Manhattan and was no stranger to cabs, which during most of the day create a dominating yellow swath on the streets, and as a young boy he remembers when I’d take him and his brother to their school on the Upper East Side from downtown, and the squabbles I’d often get into when an unscrupulous driver tried to take a circuitous, and more expensive, path as if we were wide-eyed tourists. Anyway, now that we live in Baltimore, Nick insists that this East Coast city is a cab wasteland, a declaration that is laughably false. “Dad, none of my friends ever take cabs,” he’ll say, as if he were Perry Mason delivering a closing argument to the jury.

Cab-wise, there’s no American city that compares to New York (at least Manhattan; the other boroughs are saddled with “livery drivers”), but everyone knows that. But Baltimore, as a onetime first-tier city on the East Coast with a reasonable amount of pedestrian traffic, presents few problems for me. It’s not D.C., Chicago or Boston as for the ease of rapidly hailing a cab, but it’s on a par with Philadelphia (another fading metropolis) and as for the rest of country, well, you can pretty much forget it, with the possible exception of San Francisco, and it’s no picnic there, either. On one occasion, about a decade ago, I’d just finished spending five hours in Dallas’ spectacular JFK museum (the political equivalent of baseball’s Hall of Fame in Cooperstown) at the former Texas School Book Depository, and, late for an appointment, scoured the streets in vain for a cab. Not only were there no taxis zipping by in downtown Dallas, but I could count the number of people walking. Finally, I went into a bar, ordered a bottle of Pearl beer, and a fellow called me a cab, shaking his head at my dumbass confusion.

One advantage Baltimore has over Manhattan in the cab hunt is that there are fewer people competing for drivers. Sure, in New York it was simple to flag a cabbie in about a minute, but in the afternoons, especially when it’s raining, it can be brutal, and if you’re in a location where no subway is available, it’s a very helpless feeling. Hell, forget the rain: try finding a driver at 4 p.m., whether it’s on 5th Ave. & 55th St., or Houston & Lafayette Sts. However, a Baltimorean who’s on the prowl for a cab does have to be a little savvier in the approach: unlike New York, where all the cabs are yellow, here the (more often than not) beat-up cars come in all colors, so an eagle eye is required. Also, you have to look on both sides of the road, spotting a driver going in the opposite direction and making a hand-motion that you want him to turn around.

As it happens, my wife grew up in Los Angeles (a taxi wasteland) and in the late 90s we bought a station wagon, which was stored in a Tribeca parking garage, the monthly fee for which could easily provide a very comfortable one-bedroom apartment in most parts of the United States. So it’s not as though our family is dependent upon cabs—she logged far more miles during our first year in Baltimore than the previous six in New York—but I doubt my general affection for this form of transportation will ever ebb. Not so long ago, I was riffing with a cabbie about Baltimore’s restaurants and he told me about a high school graduation dinner for his daughter in which he had a steak “so tender it just slid down my throat.” We both cracked up at the story, which was reward enough for me.