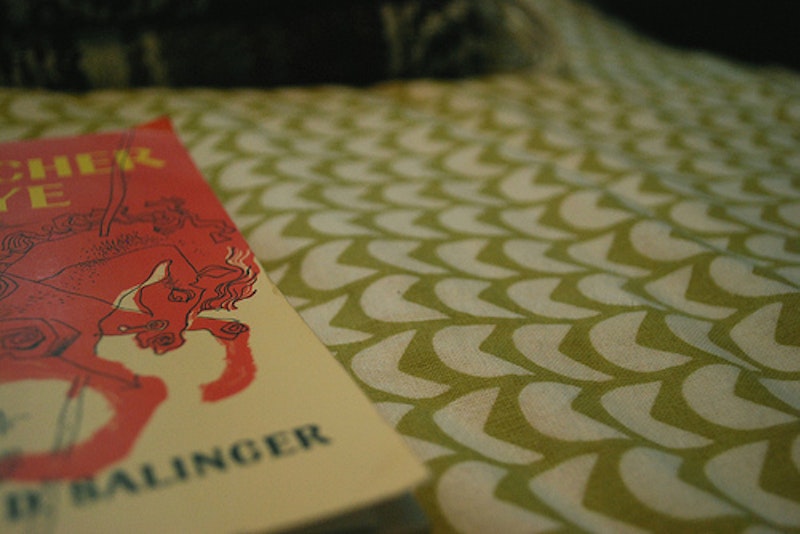 The passing of JD Salinger has me slightly on edge. Though it’s been a few years since I’ve picked up one of his books, they nevertheless played a significant role in my intellectual development.

I read Catcher in the Rye when I was in seventh grade for the same reasons behind most of what I did at that time: My older brother enjoyed it and had a copy on his bookshelf. My first impression was that Holden Caulfield was this alien character from “the past”; New York was a vague concept of cabs and hotel bars; and the existential angst was something I’d previously found only in Matt Christopher novels and The Phantom Tollbooth.

In ninth grade I was assigned my first English research paper. We had to choose a novel and dig deep into its respective criticism and analysis. I picked Catcher in the Rye and before I knew what hit me Holden became a metaphor for Jesus or St. John the Baptist and I’m pretty sure some Surrealist stuff was in the mix as well. Book after book deconstructed the characters and scenes I knew so well and reordered them into something that just didn’t vibe with me. It was less an issue of criticism-can-be-total-bullshit and more a feeling that Catcher in the Rye was so much an experience only to be had while reading the actual book. The commentary took away the real-time realness I felt every time I reread it, a good example of which is the prostitute scene. After Maurice the pimp punches Holden in the gut, the scene continues (forgive the long quote):

But I’m crazy. I swear to God I am. About halfway to the bathroom, I sort of started pretending I had a bullet in my guts. Old Maurice had plugged me. Now I was on the way to the bathroom to get a good shot of bourbon or something to help me steady my nerves and help me really go into action. I pictured myself coming out of the goddamn bathroom, dressed and all, with this blood trickling down out of the side of my mouth a little at a time. What I’d do, I’d walk down a few floors—holding onto my guts, blood leaking all over the place—and then I’d ring the elevator bell. As soon as old Maurice opened the doors, he’d see me with an automatic in my hand and he’d start screaming at me, in this very high-pitched, yellow-belly voice, to leave him alone. But I’d plug him anyway. Six shots right through his fat hairy belly. Then I’d throw my automatic down the elevator shaft—after I’d wiped off all the fingerprints and all. Then I’d crawl back to my room and call up Jane and have her come over and bandage up my guts. I pictured her holding a cigarette for me to smoke while I was bleeding in all.

The goddamn movies. They can ruin you. I’m not kidding.

For a scene that starts off with the promise of sex, the awkward refusal of it, and the dangerous repercussions of dealing with prostitutes and their pimps, to end like that was unfathomable to me. While I had no idea what it would be like to be in a room with a hooker, I understood completely how easily one’s emotions turned into non-sequiturs. I got into a good deal of trouble throughout middle and high school, some of it expected, more of it not; I got through the worst by simply thinking myself out of it, projecting away from my own problems. Reality was malleable, something to be conveniently ignored for a while if needed. There was a whole lot of growing up to do.

I certainly wasn’t turned off by highbrow analysis for life, though, as I went to major in art history and creative writing—but for a while after that book report, Catcher in the Rye stopped existing as a narrative to me.

It wasn’t until college that I picked it up again, and that was after I’d been assigned to read Franny and Zooey and A Perfect Day For Bananafish, two stories that slow-burned themselves into my consciousness by delving further into the emotions in the above scene. Reading Salinger in college felt unavoidably tongue in cheek: I was a part of and surrounded by a massive amount of white upper middle class culture, I wrote bad poetry, and dated a wonderful New Yorker whose mother and father were an art dealer and a half law clerk, half poker player, respectively. By then hipsters were everywhere, online culture was everything and nothing was sacred.

That tongue in cheek feeling wouldn’t last—what did was the certainty that Salinger’s characters, no matter how glib, were able to convey some deeper truths about the history of the culture I grew up with: the ennui of opportunity, class guilt, and cheap existentialism. Those are pejoratives; that I’ve outgrown them doesn’t remove them from my past. The fact that Salinger was able to evoke these negative realities does not cheapen his works; they were as limited as they were brilliant.

Ultimately some of Salinger’s import exists in a vacuum—a vacuum of culture, class, race and education. That doesn’t change the fact that 50 years after the publication of Catcher in the Rye so much of bourgeois, wealthy, white America (responsible for so much of the status quo) still lives in a vacuum. Even if that reality were to pass, Salinger’s work would remain a milestone of modern culture as it is experienced by a small, pervasively influential minority of the world.