Horse savior of golden light emerges at the final hour. 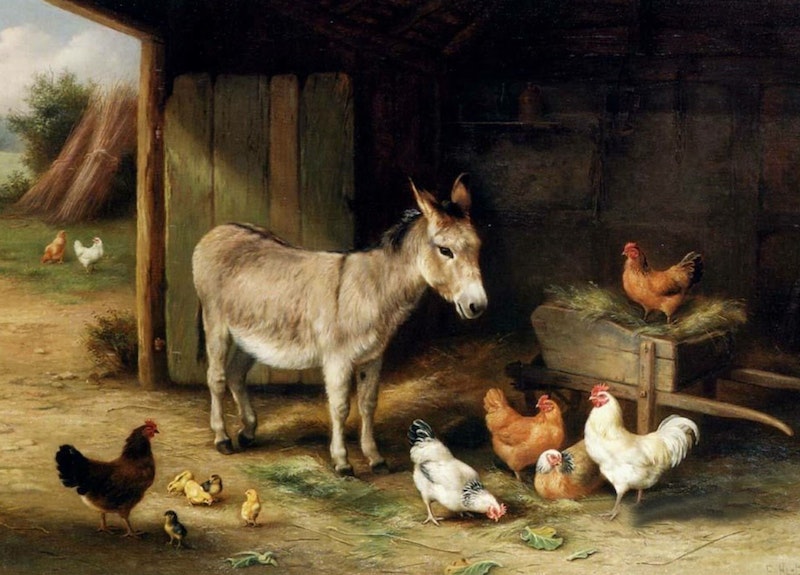 —Did you finish your grain?

—Yes. It was delish.

—Good! We should clean up.

—Eh. Why bother? They come and take the trays anyway. Why should we help them at all?

—They’re good for our character.

—I’ll put my tray by the door though. For you honey. Also I’m still a little sore from last time.

—He was meaner than usual, right?

—Right? I mean, sadistic much?

—You could read my meme digest.

—That’s definitely made you dumber.

Rooster and Monica are covered in dust, but the rubble’s thin. They haven’t been buried, burned, or boxed in. There’s no sound except for a high-pitched whine coming somewhere far upstairs. They can hear everyone running, all the other involuntary guests getting out of their pens. The guards’ equipment, including tasers and batons, has been left behind, scattered amongst the twisted metal and curved locks of the ramshackle prison beneath White House North. Rooster and Monica look out and expect certain death—this is an attack. But no. They see light shining up the corridor toward the entrance they remember coming through all those weeks—months?—ago. Slumped in the corner is Barnyard, the meanest security guard. He kicked Rooster and Monica with his steel-toed boots frequently, even when their interrogations weren’t scheduled. He took a little too much glee shoving the chickens in the cooker if you know what I mean. His head is caved in by a rock, a piece of cement that came crashing down minutes ago, ending his life and sending all of his memories and habits and influences and negative forces into a spiraling pattern of blood and brain matter. Before they can smile or joke, even spur claw his corpse, the Quibbitses glimpse their savior: a horse shining golden in the light of freedom.

—Ride upon my back, friends.

Rooster and Monica look at each other, unsure what to make of this savior horseman—or horse, rather. They walk forward without much thought: there is nothing left for them here.

—You are safe now.

—Well I’ve never heard of you. Name three of your albums.

—Just get on my back.

—Why should we trust you?

—Have you seen the face of God?

No, they haven’t. He’s got them there.

—I think we should try it.

—Why not I guess.

—They always seem nice… that’s how they get you.

—He never shows up at a convenient time.

And so they ride, blushing in the sunlight and the December wind bracing 5th Ave. On they go, into places unexplored, ready to win. This year won’t be like the rest.