An Afternoon Ballgame in Chicago and Sayonara, Philip 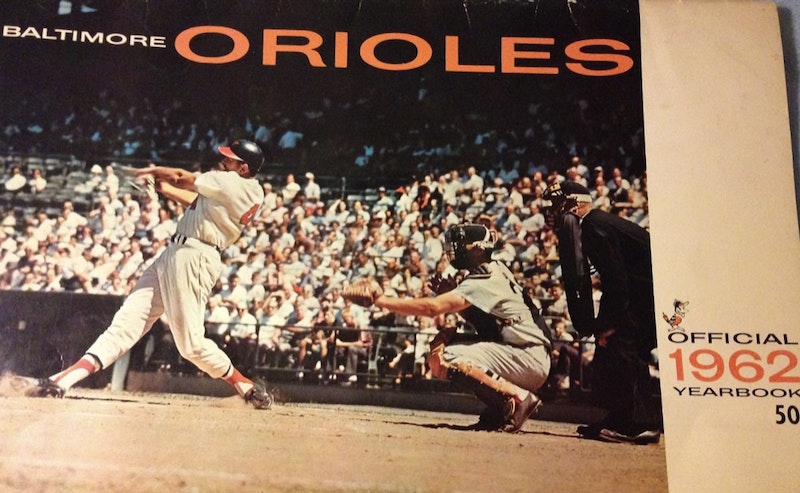 Gerald grew up with the Orioles. Baltimore in the early-1960s. His dad delivered the News-American every morning and delivered appliances in the middle of the day. A baseball obsessive and avid reader, his dad could recite the lineups of all 10 American League teams. Gerald would call out, “Minnesota!” and his dad would run through strange names like Killebrew and Oliva and a pitcher named Mudcat. “What’s his real name, Dad?” Gerald would ask. “It’s Mudcat!” his dad chuckled as Gerald shook his head.

As Gerald’s dad drove the delivery truck, he’d take his breaks studying the sports pages. He’d follow the games on the radio during his afternoon deliveries. One of Gerald’s early memories was walking into the enormous gray coliseum on 33rd St. They sat along the third base line to take in Brooks Robinson’s glove work. Gerald had heard his dad talk about Brooks’ gold glove, and was confused to see it was the same color as the other fielders, reddish-brown leather. Gerald was five or six years old. Boog Powell hit two homers that day and Brooks turned two double plays, with acrobatic diving stops that had the crowd mesmerized. On one foul pop, Robinson had scurried all the way over to the section where Gerald and his dad were sitting in the third row. The ball landed just out of reach of his glove and bounced with a high arc. Gerald’s dad jumped and grabbed it, just over the arms of two other fans. Gerald held that ball in his hand the rest of the game and ended up sleeping with it on his bedside table.

That early memory, those images of that game… Gerald must have replayed 1000 times, a mental slideshow he found himself in when memory evoke his father. Life before the towers of words, before the stories took over. Holding his dad’s calloused, permanently ink-stained hand. The plays at third base. Powell’s two booming shots to right field. The foul ball that Brooks almost caught, which bounced right into his dad’s hand. The steaming hot dog. The collective joy of the fans of a thriving team, still relatively new to a city in the shadows of the nation’s capital.

The Orioles dominated the early-1970s when Gerald played high school ball. It was a shame how things had turned sour for his team since then. With the exception of a few years in the late-90s and a decade ago, the Orioles were cellar-dwellers. That didn’t stop Gerald from listening to them at night. He’d take in the first three innings while preparing and eating dinner. The ritual started with a small tumbler of vodka with soda water and lime in the first. By the second, he was chopping vegetables and spicing up a chicken, a pork chop, or a filet of salmon. By the end of the third, he was eating his dinner and usually the Orioles had fallen behind by a run or two already.

Especially during the year after his dad’s death in 1986, when Gerald was in Pittsburgh getting his Master’s in literature. The heart attack had taken him in the night. The dream of that game was a tonic during the following year. It was also the year he fell in love with Rebecca.

Philip had driven them to Chicago in silence. The encounter at the restaurant had shaken Philip. This is exactly why Gerald worried about his nephew. The world is too chaotic for some people, but to avoid the chaos entirely, it just makes life worse. They’d listened to interviews most of the way. Authors, musicians, environmentalists and policy makers. Then they drove in nighttime silence for the final hour as they approached the metropolis of lights that is Chicago. The mecca of opportunity for so many coming out of the south in the late-1920s, 30s and 40s.

Gerald read Richard Wright’s novels as an undergrad. Though Native Son was published in 1940, it resonated with Gerald in the late-1970s. Not enough change and not fast enough. Gerald’s path toward literature was propelled by the unflinching words of Baldwin, Ellison and Wright, but also influenced by the visions of the experimental poets of the 1960s and 70s. While his mind drifted from his own literary path back to the highway and the lights of Chicago, Gerald paused the interview.

“Want to see an afternoon ballgame tomorrow? Looks like the White Sox are playing at one. They’re letting in fans. Socially distant. I know you’re not interested in the actual game. But it’s a chance to be outside and enjoy an event. Those sausages will keep your mind off the game.” Philip begrudgingly accepted the idea. He did enjoy grilled sausages with those greasy peppers and onions slathered on top.

They got to the park early and found two seats close to the left-field line, just beyond third base. They watched batting practice. More accurately, Gerald watched batting practice while Philip read. The hitters today tried to launch every ball out of the park. Then, as if doing chores, they spent the last 20 swings lining balls to the opposite field.

A lefty came up and lined a shot just past them, startling Philip. “Shit! That thing almost hit me! I’m going to get a sausage. Any preference for you, Uncle Gerald?”

“Whatever you get is fine. Make sure to add peppers and onions and hot mustard if they’ve got it.”

The game started. The sun was fierce. Gerald looked at his nephew as he watched the other fans eating their food, with a black White Sox cap on his head. Philip hadn’t curved the brim, so it pointed awkwardly straight. Gerald took the cap and curved it for his nephew, then replaced it on Philip’s head. The game was surprisingly dull. Lots of strikeouts and very few hits. For such a warm day, Gerald expected more runs.

They got back to the hotel and Gerald checked out Amtrak. He was amazed how cheap it was. Fifty bucks for a six-hour train trip. Philip was passed out on the couch after all the sun. They'd share a final dinner and Philip would drop Gerald at the station in the morning before heading back East.

Philip remained asleep as the afternoon became the evening. Gerald checked his email, wrote a final note to Rebecca, explaining he was due to arrive by 2:30 p.m. At seven, Gerald decided room service would be easiest. He woke Philip and asked if he’d like a salad and sandwich. Philip groggily nodded then stumbled into the shower while Gerald ordered.

At the station the next morning, with plenty of time before his train departed, Gerald decided he’d give Philip some direct advice. This was something of a surprise, even to himself. “Philip. I’m going to say something and I’d like you to listen. Don’t react. I know it’s controlling to speak like this. Please hear me out. I don’t give you advice. I am patient with you. Just hear me out. Okay?”

“Okay,” Philip replied in a whisper.

“One. Please get some medication for your anxiety. You’ve got to give it a shot. Maybe it works. Maybe it doesn’t. But give it a shot. Two. Therapy, meditation or exercise. Choose one and get a routine going. I’ve spent three decades reading books and taking walks and isolating myself from the mess of life. I don’t exactly regret it. But I wouldn’t recommend it. I wish I knew how to be different. Maybe I’m too old. You’re not. Three. When you look at these dating sites, stop judging every little detail you read. Look at the pictures. Search for someone honest. Look in their eyes and in their choice of the picture. Forget all the pretentious ones and all the image-obsessed ones. I know there are women out there for you. Women who don’t want a typical guy, who don’t want a conformist, capitalist jerk. Find them. Go on a few dates. Not just one or two. Don’t dismiss them. Alright, Philip. That’s all.”

Gerald looked over at the driver seat. Philip stared out the other window, He scratched at his head and seemed to be holding back tears. “I love you, Philip. Now give me a hug and I’ll go find my track number.” They got out of the Corolla. Gerald gave his nephew a long hug and thanked him for the road trip.” Before he drove away, Philip called out to his uncle. “Go fall in love, old fella.”