An Afternoon at the Renaissance Festival

Don't miss the cheesecake on a stick. 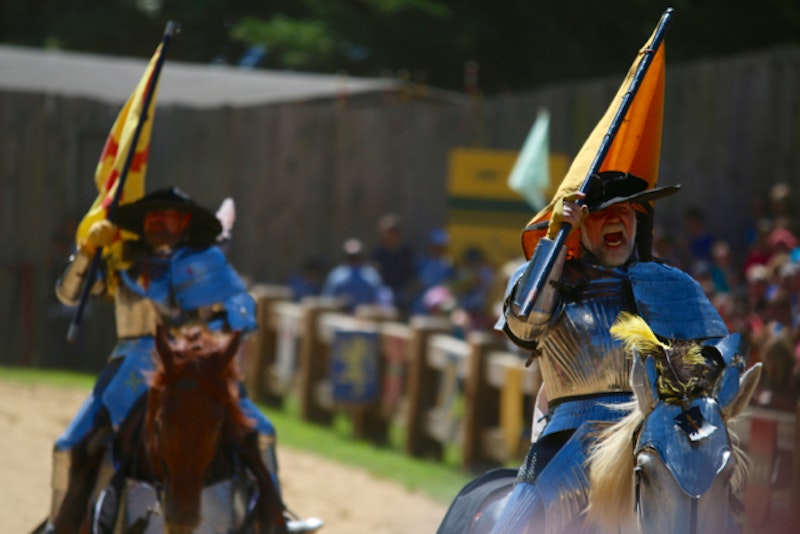 There’s something liberating about eating a greasy turkey leg. Although there’s no graceful way to bite into a hunk of fried meat, tearing into the flesh of an overcooked bird was better than I’d expected. “How many turkeys do you think were killed for this occasion?” Zack wondered aloud, staring at the drumstick I was in the process of devouring. There was an assortment of food served at Maryland’s Renaissance Festival, some that were fun like turkey legs, and others humdrum (e.g. pizza). I especially enjoyed watching the sweet nut vendors weave their way through throngs of people, shouting variations of: “Ask me about my nuts!” or “I’ve got sweet nuts over here!” Even the flower vendors were cheeky: “Buy one now, get one later!”

Five of us had planned on attending the festival since September, but with conflicting work schedules it was hard to find a time that worked. But last Sunday it all aligned, and we hunted for appropriate Renaissance attire. Emily and I scoured a local Goodwill, where luckily I found a few pieces for under $10. At one point we stopped at Party City, hoping that the festival coinciding within the month of Halloween would bring costume pieces that we could incorporate into our wardrobe. The sound of screeching children dressed as Elsa and Spider-Man only reaffirmed my desire to never have kids. With the exception of Zack, the rest of us were dressed for the part. There were kilts, tunics, fluffy white shirts and fancy vests with golden buttons, and skirts that were perfect for dancing.

I had no idea what to expect. Once we arrived I was overwhelmed. After purchasing tickets, we walked inside and took a moment to inspect the surroundings. There were musical performances, the streets were littered with shops that sold staffs and swords, and people walking on stilts. One of the stilted performers caught me staring at him and ended up winking and blowing a kiss. I tried my hand at throwing axes but failed miserably, and watched as Emily tested her strength against one of those hit-the-lever-and-try-to-ring-the-bell contraptions.

We attended a jousting event, but it was underwhelming. We sat in direct sunlight for about half an hour waiting for the act to start. Seeing men and women dressed in full armor and riding horses full speed toward each other was pretty neat, but the entire spectacle lasted about 15 minutes. I was particularly irked that I was too short to see much of what was going on. The couple that sat in front of me had their phones out the entire time, taking multiple blurry pictures and talking loudly to each other. After jousting, Trevor mentioned that there would be a sword swallower as well. The performer’s name was Johnny Fox and he did an amazing job keeping the crowd entertained. A few immature frat boys that sat behind me started yelling “GAAAY!” whenever the mention of “swallowing” or a reference to how far the sword would reach down the throat were brought up.

The highlight of the festival was the cheesecake on a stick. Was it four dollars? Yes. Was it worth it? Of course!