Amor Fati: In A Fool's Paradise

Don’t fret, hold onto your hat. 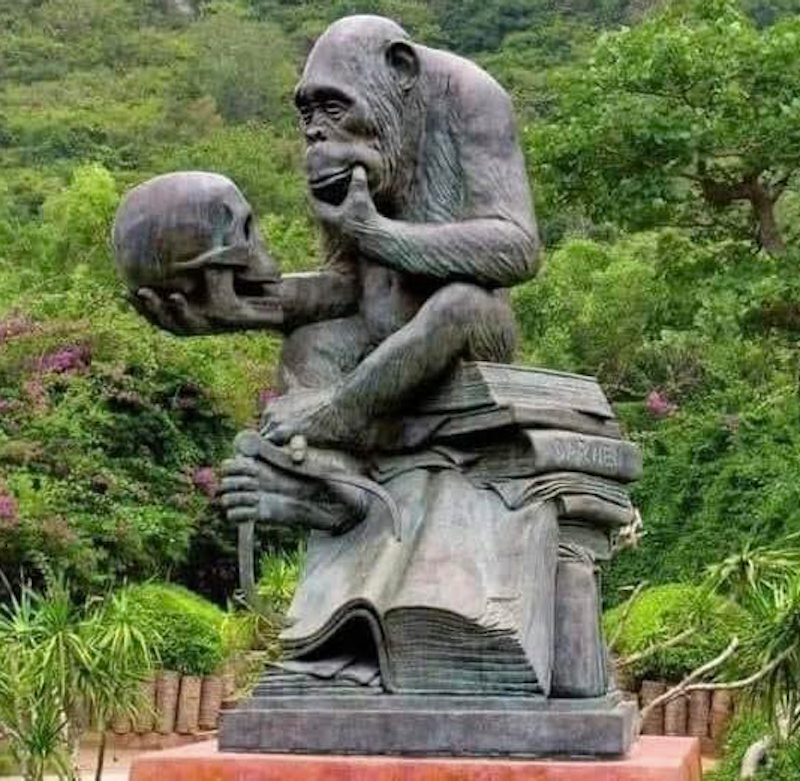 George Carlin famously quipped, “The reason it’s called the American Dream is because you have to be asleep to believe it.” The Bible touts our heavenly paradise as a world without end. Amen. It’s a mixed bag of tricks, metaphors, and misquotes. Don’t fret, hold onto your hat. Panic or remain calm. It’s a moot point for mutes. Read the sign language. There’s never any writing on the wall that can’t be deciphered. I don’t deny or dispute the existence of all mighty beings. It’s all relative to similar acts, failed attempts at miscommunication, or confusing disinformation. Plain as the nose on your face, or someone else’s honker-snout.

I’m not privy to the particulars. I’m not of this world. To never feel comfortable in my own flimsy meat bag, a fleshy prison cell. The jail of terminal life which ultimately leads to who knows where. Made out of mud, muscle and blood, skin and bone, some say. Nietzsche proclaimed god is dead, he has no bearing, no real barometer on reality. I’m not sorry god is dead. God is that concept by which we measure our pain, as John Lennon put it. He also said the Beatles were bigger than god or Jesus. Pain is inescapable if you feel anything at all. I won’t take their word on it.

Paradise is where you find it. Like god, an illusion. As elusive as a mouse avoiding caught in a trap, either physically by pursuing it, or mentally by someone trying to understand you’re a fool in paradise. That place where others tell you what it is and where, and you’ll figure it out or die trying. Amor Fati, translates to the love of fate. It’s nothing more than a premise of accepting the platitudes of living an authentic life as it comes and eventually goes until it’s completely gone.

Leaving little, if no trace. The marker of your essence. Turning tables, burning bridges and never looking back with regrets ain’t so, retorts the fuckery of existence. Charles Bukowski’s poem, “Alone With Everybody,” contains the lines, “There’s no chance at all: we are all trapped by a singular fate.” It may be true, but what a party pooper. What’s a nihilist to do? Constant existential dread creates a shabby entropy. The god factor has no foot, paw, or hoof to stand on. If there’s no god, like if there was no beer, somebody will invent it and drink it up. I’ve heard, in heaven there’s no beer. Another one of god’s cruel jokes. Assuming god doesn’t imbibe.

Que sera, sera. Doris Day sang it. “Whatever will be, will be. The future is not ours to see.” Fuck it. Doris Day was sadly mistaken. Pity the quintessential all-American girl next door. After four failed marriages and her share of troubles, it gives new meaning to her song. Can we live our lives by song lyrics? I hope not, but it’d be a nice idea. Renew old memories to suit your present fate. Relive the memories of others. Ancient Greek and Roman philosophers, Epictetus and Marcus Aurelius, have little if nothing to do with today’s mindset, yet thought fate was the main player. They said, embrace the good and bad equally in life. Today's humans expect immediate action and reaction. Satisfying the gratification of our desires.

Seeking pleasure without pain leaves nothing to gain. Any dominatrix would agree. Whips and chains, slings and arrows. Memento Mori Amor Fati; remember death, and love fate. What a way to go. Therefore, to ponder the ultimate goal in life, death? Live for today, for tomorrow who knows? Promises in the promised land. More like who gives a flying fuck? Life's cheap when you live in a slaughterhouse. No one knows what the future holds. Tomorrow may bring untold joys or endless sorrows. Take it in stride and roll with the gut punches. For a supposedly civilized culture, we’re little more than rough beasts. Vaguely aware, wandering aimlessly. Easy for me to say. Easier for you to ignore. No easy outs or second chances around this joint, take it or leave it, if you can get it, baby, now go with the flow, or drown in the wake of existential slop.