A Walk of Penance in New Dorp

A walk of penance for pictures after Thanksgiving. 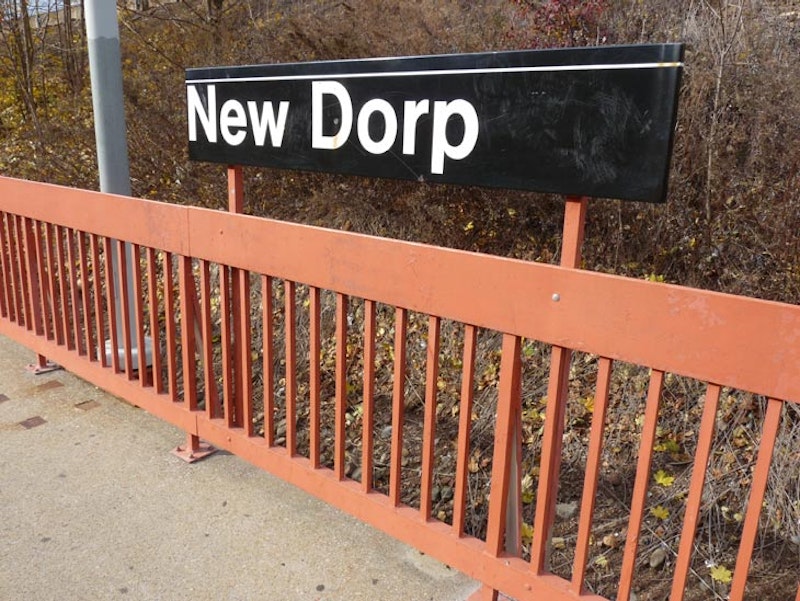 Working off the excesses of Thanksgiving, I took a walk of penance, to consider my shortcomings and grab a few pictures. I hopped a Staten Island ferryboat, and, in direct rebuke to most non-commuters who use the ferry, remained in Staten Island for the day instead of getting on the next boat back to Manhattan. Taking advantage of one of NYC’s few rail-ferry connections, I boarded the Staten Island Railway and took it straight to New Dorp, a realm I’d neglected for a few years.

New Dorp is a transliteration of Dutch nieuw dorp, or “new town,” so called because it was settled in 1670, 10 years after nearby oude dorp, a name remembered in the street name Old Town Rd. (My Bronx friend, Jonathan H., claims that “’Dorp’ sounds awkward, ‘dorf’ sounds classy, and “thorp” sounds basic.”)

The town grew up around the junction of Richmond and Amboy Rds., where there were a proliferation of taverns serving stagecoaches and horse-drawn carriages. The Vanderbilt family was prominent in the area and owned several racing and trotting tracks. The family helped found the New Dorp Moravian Church and Cemetery along Richmond and Todt Hill Rds.; the Vanderbilt Mausoleum, built for $1 million and designed by Richard Morris Hunt, can be found at the cemetery’s rear section. 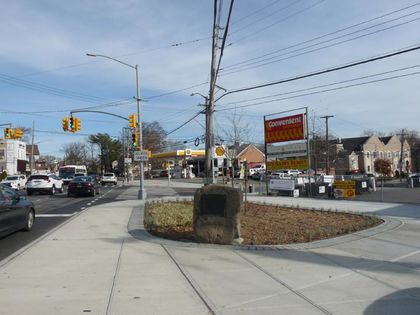 A pair of plaques marks the junction of Richmond Rd. and New Dorp L. One commemorates the area’s World War I dead, while the other marks the Rose and Crown Tavern, which stood here during the Revolutionary War. New Dorp figured prominently in the Revolution. Two taverns, about a block apart, were occupied by British officers including commander-in-chief General William Howe. The Rose and Crown was a one-story building with a central hall and rooms on either side, “guarded” by a large elm tree. The tree was cut down long ago, but has lent its name to the dead end Elmtree Ave. off Hylan Blvd. and the Elmtree Beacon at New Dorp La. where it meets Raritan Bay. Howe actually made his headquarters at the Black Horse a block away at Richmond and Amboy Rds., a building that lasted long enough into the 20th Century to make its way onto historic photographs and postcards. 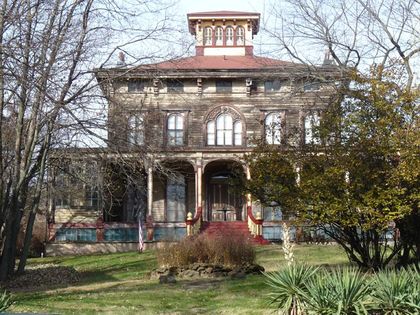 The Gustav Mayer House is at 2475 Richmond Rd. just west of New Dorp Lane. This ornate, suburban “villa,” built in 1857 in the romantic Italianate style, is set on a knoll and boasts a cupola that offers views of Raritan Bay and a full-width front veranda. For more than a century, until 1990, it was occupied by family members of Gustav Mayer, a wealthy, German-born businessman who was a major innovator in the cookie industry, as the inventor of the Nabisco Sugar Wafer. Much of its Italianate features have remained intact, but a paint job would help. 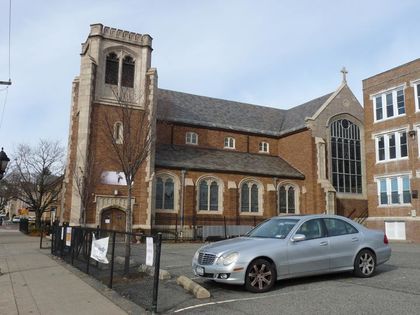 The Roman Catholic Our Lady Queen of Peace parish was established in 1922, with its first Masses taking place in the aforementioned Black Horse Tavern. This English Gothic parish church was constructed in 1928, and seems to have an offbeat selection of liturgical tunes in its chimes rotation; when I passed, it was playing the Irish classic, “Galway Bay.” 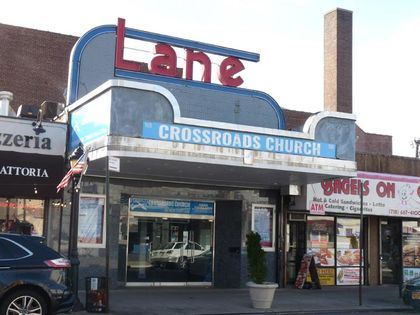 The Art-Deco themed Lane Theatre, 168 New Dorp L. near 10th St., was developed by the Moses brothers, Charles, Elias and Lewis, designed by renowned architect John Eberson, and opened in 1937. The first feature was 100 Men and a Girl, starring teen singing sensation Deanna Durbin. The Lane featured a modest 600 seats in its heyday, later reduced to 550. Until 2001, it had been recast as a nightclub that’s now closed, though the distinctive red and blue “Lane” façade is still visible. In the Lane’s last gasp of notoriety, Eminem played here in the spring of 1999. Its Art Moderne foyer and corridors remain intact. Like many older theater buildings, it’s now a storefront church. 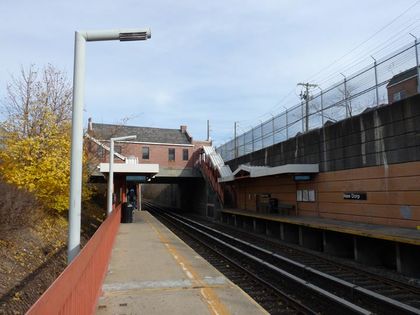 Though the Staten Island Railway (formerly Staten Island Rapid Transit) eliminated most of its grade crossings in the 1930s, New Dorp was placed in this open cut in 1965, with the brick shelter seen in the center added at the time. Unsurprisingly, the Tottenville-bound entrance is in dire need of repair with holes in its roof, while the Manhattan-bound is in good repair.

Staten Island’s commuter railroad, established by Erasmus Wiman in the 1800s, resembles a NYC subway, with R-44 cars formerly used on subway routes, but it’s governed by railroad rules. Under the aegis of the Metropolitan Transit Authority these days, it was formerly run by the Baltimore and Ohio Railroad. 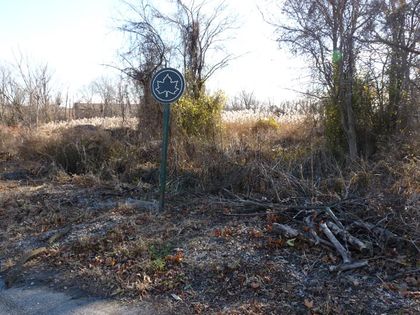 Further north in Dongan Hills, at Zoe St. and Naughton Ave., we find a piece of the Staten Island wetlands that was ignored by all but the most detailed topographical maps; Hagstrom and Geographia assumed it would be drained and developed, and so showed the streets that developers were hoping to build through it. Such lofty plans evaporated, though, and so what is called Last Chance Pond still remains here. According to the NYC Parks Department: “Efforts to preserve the pond and wilderness area began in earnest in the mid-1960s. Local residents Louis Caravone (currently Chair of Community Board 2) and John P. Mouner of the Beachview Manor Citizens Association enlisted the support of a formidable cadre of politicians and environmental groups to aid their efforts. Together, they helped found the Last Chance Pond and Wilderness Foundation… The endangered property in the area of the current park was ultimately purchased by the New York State Nature and Historical Preserve Trust, a non-profit organization, which then donated the land to the City for park purposes. Finally, in 1999, the area of the current park was assigned to Parks by Department of Citywide Administrative Services (DCAS) on December 30, 1999.” 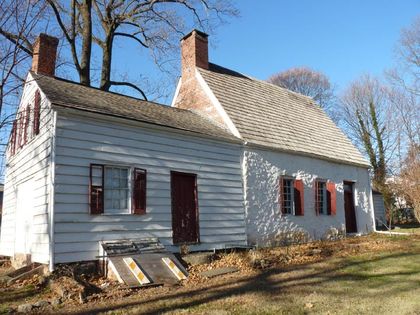 In a borough that preserves more 17th-Century dwellings than any other, the Stillwell-Billiou-Perine House, at Richmond Rd. and Cromwell Ave., is its oldest: indeed it is the third oldest building in New York State. Like many colonial homes, it features a very small central section added to in subsequent years. Pierre Billiou (1625-1708), a French Huguenot judicial officer and delegate to the New York general assembly, built a simple stone structure here in 1662 when the region was known as Oude Dorp (“Old Town”). Billiou’s daughter married a Thomas Stillwell, and the Stillwells occupied the dwelling till 1764, gradually adding to the structure; members of the Perine family then lived here until 1919. It’s currently maintained by the Staten Island Historical Society. The oldest section of the building, the center fieldstone part, may be seen by strolling around to the back.

Unfortunately its pressed metal historic sign, placed in 1938, that marked it as New York State historic site and was a relic in its own right, has been made off with by hooligans.