What was once its own city once had its own towns, many of which live on through neighborhoods today. 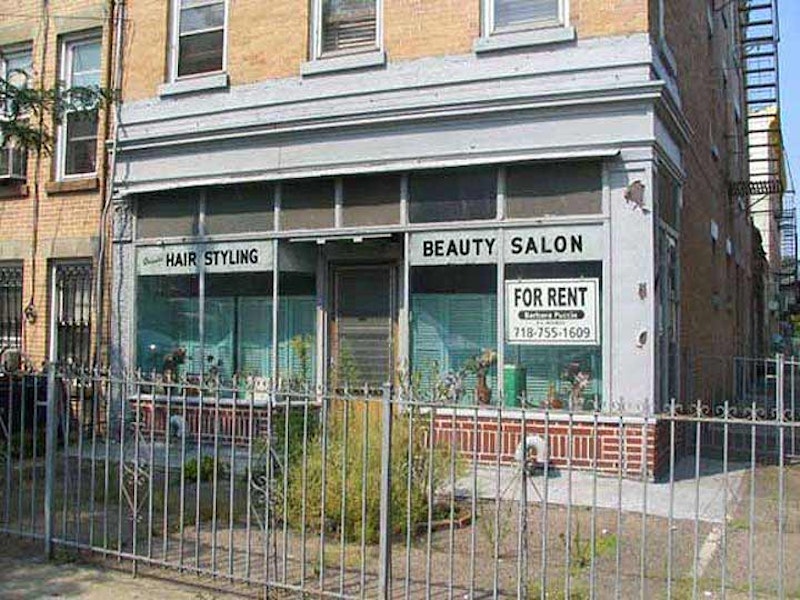 Brooklyn, the borough, was once a city on its own until it narrowly voted to consolidate with New York City in 1898. The city evolved out of six distinct towns in Kings County, most developed during the Dutch colonial period: Brooklyn, Bushwick, New Utrecht, Gravesend, Flatbush, and Flatlands. Later, this became two cities and six separate towns, but gradually the city of Brooklyn annexed them all until by 1896, the city of Brooklyn and Kings County were co-terminous (as the city and county of Philadelphia, PA. are). That lasted just two years.

Some of Brooklyn’s neighborhoods simply retained the old town names. Above is a long-gone beauty parlor I found at 10th Ave. and 41st St. in Borough Park, thought of today as a quiet residential neighborhood between Dyker Heights and Kensington in the southwestern quadrant of Brooklyn. But Borough Park used to have a different aspect. It was always quiet, but until the late-1800s it was the province of farms, hay wagons and mooing cows. Formerly vacant land was opened to real estate development in 1886 by Electus B. Litchfield, who called his development “Blythebourne” (from Scottish terms for “happy” and “home.”) In 1898 Sen. William Reynolds expanded the property and renamed it Borough Park, though the Post Office on 12th Ave. and 51st still bears the name Blythebourne Branch. 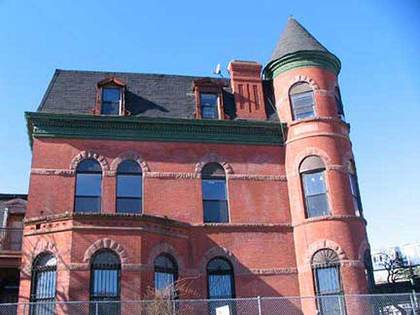 One of Kings County’s original six towns, Bushwick is a vast area located between Broadway, Flushing Ave., the Queens line (Ridgewood) and the Brooklyn-Queens cemetery belt. Like a number of Brooklyn locales, the name’s an English version of the Dutch “Boswijck” (pronounced BOSS-vuyk) meaning “town in the woods” or “heavy woods.” While poring over Brooklyn maps and street guides as a kid, the name reminded me of the cartoon character “J. Skulking Bushwack” on the Lariat Sam cartoons from Captain Kangaroo. Gene Wood, later the Match Game announcer, sang the theme song. 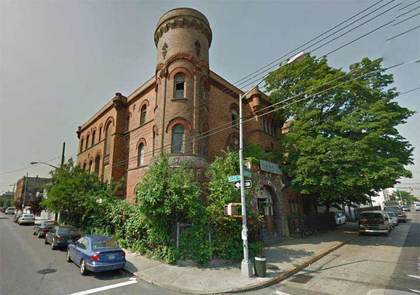 Connecticut merchant John R. Pitkin purchased land from the farming families in western New Lots in 1835 and grandiosely named his development East New York, believing it could become a mini-metropolis rivaling NYC to the west. The neighborhood did eventually become a residential and shopping mecca, but not a NYC rival. Pitkin failed to build up the area and in the mid-1900s it was Horace Miller and James Butler who developed it after repurchasing it. Nevertheless, both Pitkin and Miller have avenues named for them. Today East New York lies roughly between the LIRR/Canarsie line cut and Euclid Ave. and from Atlantic Ave. south to New Lots Ave. 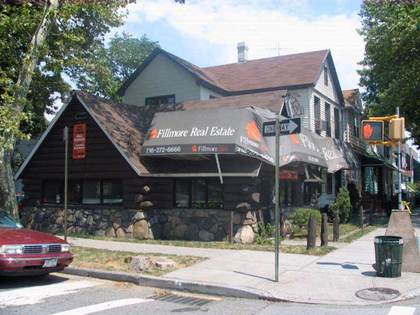 Canarsie is named for the indigenous Canarsee Indians the Dutch found in residence when they arrived in the 1640s. The name “Canarsee”’s etymology is in dispute, but it some scholars of Native-American tongues say it means “fenced land” or “fenced place” in Algonquin. Years of warring with the invading Dutch took a toll on the Indians in western Long Island; most of the Canarsees moved east and today most of the descendants can be found at the Poospatuck Reservation, near Patchogue in eastern Long Island. 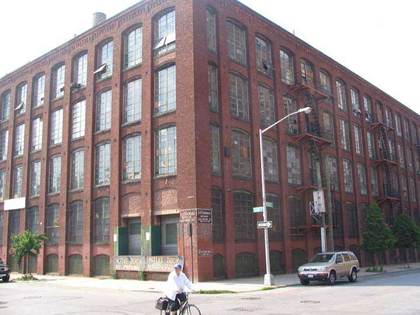 Until the 1970s or so, DUMBO, an acronym for “Down Under the Manhattan and Brooklyn Bridge Overpasses,” didn’t have a name of its own; it was just the gritty, industrial eastern section of Brooklyn Heights. After industries moved out, real estate speculators, including David Walentas, bought up much of the old brick and stone factories and warehouses. Today DUMBO runs between Old Fulton St. on the west, the East River on the north, Gold St. on the east and the Farragut Houses on the south. 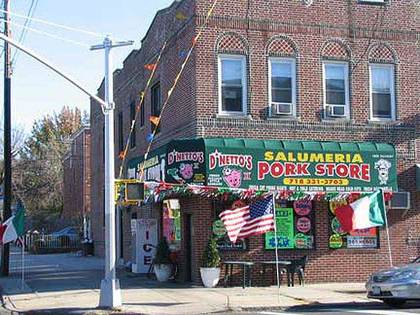 Bath Beach and Bath Ave. were named for the British spa town on the Avon, famous in British lit classes for the Wife of Bath, the randy, frequently-married heroine featured in Chaucer’s 14th-century Canterbury Tales. This was a recreational area in Brooklyn too, as villas and yacht clubs clustered near the shore. It’s not a beach these days, but there’s a small sandy area along Gravesend Bay near the W. 8th St. entrance on the Belt Parkway. Bath Beach also had an amusement park (Ulmer Park, closed 1899, remembered today only by the bus depot at 25th and Harway Aves.). The Depression ended Bath Beach’s days as a seaside resort area and soon, multi-unit housing appeared on its streets, further encouraged by the construction of the Belt Parkway through the neighborhood in 1939-1940. Till they hit it big in showbiz, the Three Stooges (two of them, anyway, Moe and Curly) were carpenters in Bath Beach. 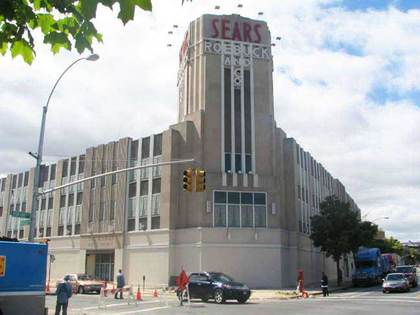 The name Flatbush is an Anglicization of the Dutch Vlacke bos (vlacke = vlak = flat; “flat woodland” or “wooded plain”), so Flatbush is something of a rarity, a rough English bowdlerization of a Dutch phrase that wound up close to the actual meaning. Once a town in its own right, today it’s a neighborhood with an undefined border, but I make it as bordered by Ocean,  Clarkson and Brooklyn Aves. and by Ave. I — anything south of that is Midwood and anything east is East Flatbush. 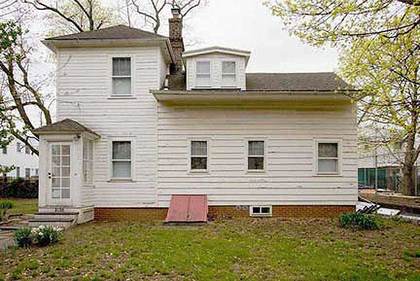 Scholars differ on how Gravesend got its name. The more widely-accepted theory is that Gravesend is named for a British seacoast town 15 miles east of London. Gravesend was the only one of the six original Kings County towns that was a British settlement. In Old English, “grave” meant “grove” so the name means “town at the end of the grove.” Pocahontas, the Algonquian Indian princess who apparently saved the life of captain John Smith from execution by her father Powhatan in 1607 is buried in Gravesend, England; she’d gone to England in 1616 with her husband, John Rolfe, and died of tuberculosis the following year.

The second view was that Gravesend derives from a Dutch name, s’Gravenzande or s’Gravensande, so named by Dutch provincial governor of New Netherland William Kieft, who donated a small tract of land in what became Gravesend to a British immigrant, Lady Deborah Moody, and her son, Sir Henry, in 1643. s’Gravenzande means “The Count’s Beach” and may have been named for Henry; perhaps it was named for Kieft’s birthplace on the Maas River in Holland.

Gravesend has expanded beyond its original town square marked by Village Roads North, South and East, and Van Sicklen St. Today it encompasses everything between Stillwell Ave., Kings Highway, Ocean Parkway and the Belt Parkway. 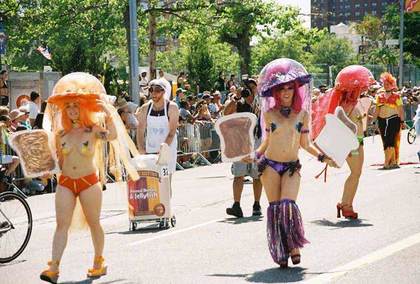 When the Dutch arrived in Brooklyn in the 1600s, they found long-eared lagomorphs all over what became Coney Island, which was an island at the time. They called it konijnen eylandt (Rabbit Island) which became bowdlerized into “Coney Island.” In the early-20th Century Coney Island Creek and Sheepshead Bay were separated by landfill and Coney became a peninsula, not an island; even today the ground is still marshy and there are spots where high-rise apartment houses can’t be built.