Astoria was named for a man who apparently never set foot in it. 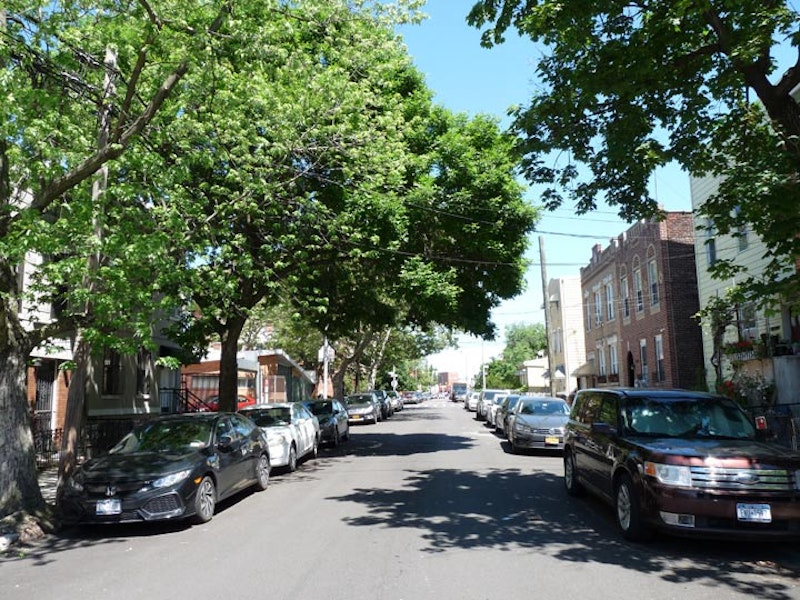 Newtown Rd. isn’t named for the neighborhood where it is, but for the neighborhood it runs to. And, like a number of NYC streets that run aslant the overall grid, it’s one of the older roads in the area. It’s an Indian trail that became the main road to early Astoria settler William Hallett’s farm in the mid-17th century, and to the treacherous Hell Gate, the East River crossing to Manhattan. Its eastern stretch ended in the heart of Newtown, now Elmhurst, and was called Hurlgate, or Hellgate, Ferry Rd.; and later named for the town through which it passed, becoming Woodside Ave. The road twisted and turned, to avoid topography like hills and swamps. It was once the sole road between the East River and the heart of Newtown. 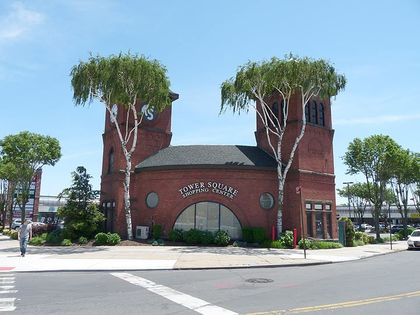 The towers could be seen for miles. The railway building contained the largest car barn in Queens and serviced trolley cars from Flushing, College Point, Jamaica and Long Island City. In its day, it was every bit the transportation hub that the current Jamaica LIRR station is. The coming of the Independent Subway system, along with the advent of motorized buses, spelled doom for the NY & QCR, along with other trolley companies citywide. On September 5, 1937, the final trolley rolled down Northern Boulevard.

The trolley barn and its clock were slated to be torn down in the mid-1980s, but preservationists saved it. It serves a role in the Tower Square shopping mall. Currently the former trolley barn awaits a tenant; for many years, a Pizza Hut occupied the ground floor. 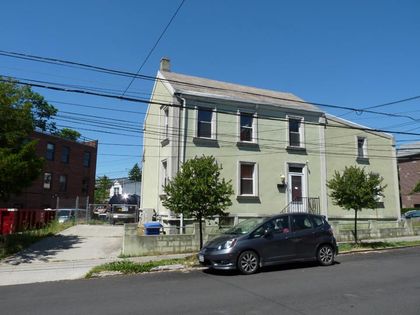 At Newtown Rd. and 46th St. some older buildings have odd angles. This is the last remnant of an old village called Middletown (likely called because it lay between old Astoria and Newtown) instituted in the 17th century. In 1721 one of Queens’ first schools was located here at the confluence of Newtown and Old Ridge Rds. British and Hessian troops marched by the school during the American Revolution. A century later, some schoolboys found a cache of gold coins worth $840 in its walls, likely hidden during the Revolution.

Today, the school’s long gone, but Old Ridge Rd. still exists in the form of a curving driveway (seen at right in photo right). Another piece can be found between 37th and 38th Aves. and 29th and 30th Sts. (it was preserved by a streetcar right-of-way), and an old house is still turned to face the now-disappeared road on 33rd St. south of Broadway. 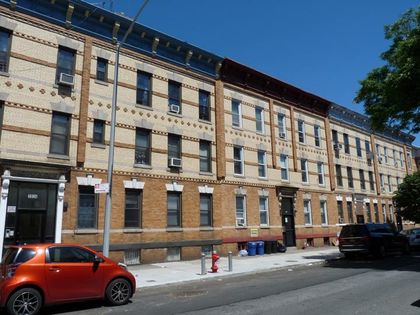 Dotted throughout northern and western Queens are apartment blocks constructed with handsome yellow brick, seen here at Newtown Rd. and 41st St. Developer Gustave X. Mathews built acres of such housing between 1915 and 1930 in Astoria, Woodside, Ridgewood and Elmhurst.

The units were produced for $8,000 in 1915 by Mathews, who’s virtually unknown today but responsible for much classic residential architecture in Queens. The distinctive yellow bricks were produced in the kilns of Balthazar Kreischer’s brick works in the far reaches of Staten Island. (The Kreischer and Long Island City stalwarts, the Steinways, were linked by marriage.) By 1917, Mathews flats were in such demand that it’s said that if laid side by side the entire string of houses would reach 4.5 miles.

Mathews mass-produced these multi-unit houses for about $8,000 and sold them for $11,000. They didn’t have central heating or hot water systems. The only heat came from coal in the stove and a kerosene heater in the living room. Despite this, the U.S. Government gave special recognition to Matthews’ concept in 1915 when an exhibit was opened at the Panama-Pacific Exposition in San Francisco. It showed the world how efficiently these type of apartments met housing needs for a surging population.

The final units in the Mathews series were built in 1930, designed by architect Louis Allmendinger, clustered in the blocks around Grand Ave. and 80th St. in Elmhurst.

Parts of 30th Ave. in Astoria are overlaid on that old road to the Hell Gate. Its former name, until the 1920s, was Grand Ave. In that decade, the Queens Topographical Bureau began implementing a borough-wide house and street numbering system that wiped out the majority of Queens’ former named streets; the reason was to avoid street name duplication, like Washington, Main, and Spruce in Astoria, Flushing, and Jamaica; the Post Office was getting confused. However, the new system bred new confusion, as in places like Astoria (thick with numbered streets in the 20s and 30s) and Maspeth (50s and 60s) many streets wound up with the same numbered Avenues, Streets, Roads and Drives. 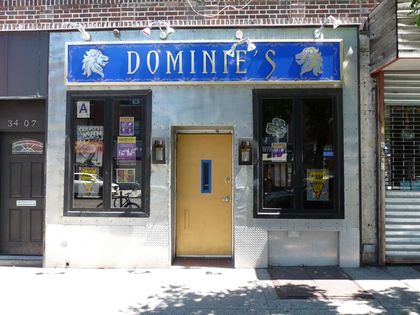 Dominie’s Hoek takes its name from Hunters Point’s original name. The region was originally settled when a tract of land was awarded to Everard Bogardus, a Dutch Reformed minister (dominie), in 1643. “Hoek” in Dutch means “place” or “locality” and the word can be found in Brooklyn names like Red Hook and Varkens Hook (“place where pigs are sold”). Dominie’s, on 30th Ave. between 34th and 35th, is apparently similarly inspired. 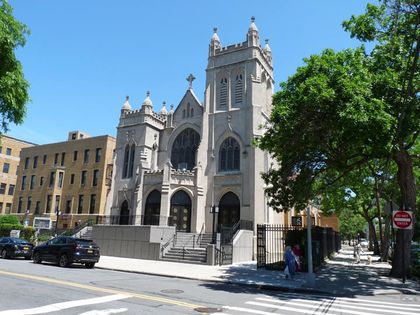 Newtown Ave. braches off from 30th Ave. and 33rd St. and runs northwest to Astoria Blvd., following the old trail. At Crescent St., filling the block north to Astoria Blvd., is Our Lady of Mount Carmel Church, which calls itself the “Mother Church of Queens County.” It’s one of the borough’s oldest Catholic parishes, instituted in 1840. The present white limestone structure dates to 1873 with a 1916 enlargement. Other handsome buildings in the Mt. Carmel complex include the parish rectory and the Young Women’s Leadership School of Astoria. The parish was founded further west in Astoria Village, and the parish churchyard can still be found at 21st St. and 26th Rd.; the grounds are known as the “Irish Famine Cemetery” since so many Irish immigrants fleeing the 1840s potato famine now rest there. 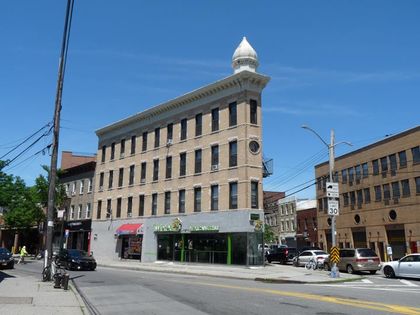 Four roads converge at Astoria Square on the eastern edge of old Astoria Village, first established by fur merchant Stephen Ailing Halsey in 1839, who laid out streets and built the structures in the area surrounding Hallett’s Cove in northwest Queens.

Astoria was named for a man who apparently never set foot in it. A bitter battle for naming the village was finally named by supporters and friends of John Jacob Astor (1763-1848). Astor, entrepreneur and real estate tycoon who had made his money in the fur trade, had become the wealthiest man in America by 1840 with a net worth of over $40 million. The beasts that contributed their furs were hunted and trapped in the northwest part of North America, in Astor’s day still owned by the British; later, a town named Astoria sprang up in the state of Oregon.

21st St. (originally Van Alst Ave.; the name is remembered by a G train subway station a few miles south of here); Astoria Blvd., once known as Flushing Ave. because it stretched east to Flushing Creek and the town of the same name beyond it; 27th Ave.; and Newtown Rd., perhaps the original road established in the area by Native Americans in the pre-colonial era, which led form the East River through the swamps to what we now call Woodside are the four roads that meet here.

In 1889 L. Gally established a furniture store and built this handsome four-story brick building in the western “V” formed by 27th Ave. and Astoria Blvd. at the west end of Newtown Ave.. The furniture store lasted just a few decades, but this distinctive building with its cupola, now overshadowed by a high rise on the opposite side of Astoria Blvd., has “nonetheless persisted.” It’s been nicely restored within the past decade. It’s called Astoria’s Flatiron Building, but the actual Flatiron Building should be called Manhattan’s L. Gally Building— t preceded it by 12 years.