A Hazy Shade of October

Balancing the divide between neighborhood and school friends as a kid was often a tricky business. 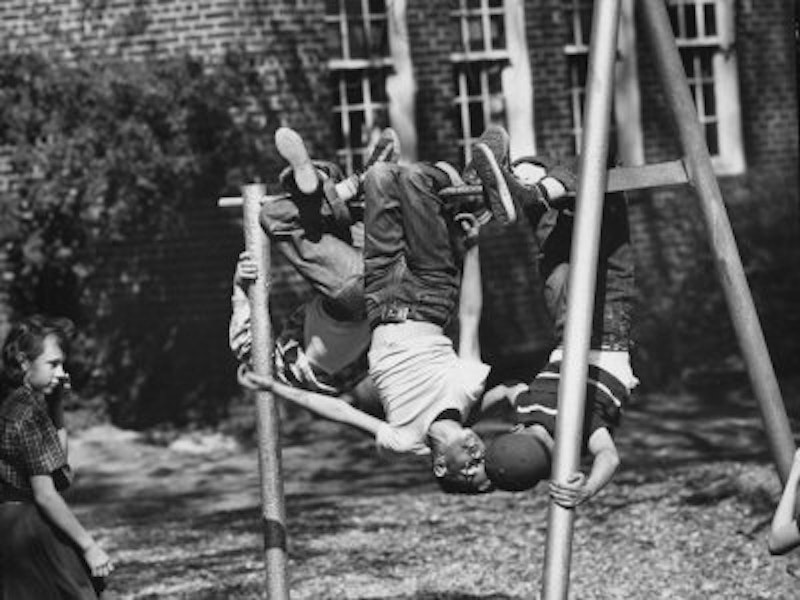 It’s curious how one’s memory bank suddenly pings like a jolt out of the blue. One day last week I was visited here in Baltimore by a longtime friend, Granville, a jovial fellow in town for a wedding, taking a short break from months of research in Oaxaca he’s undertaken for a book he’s in the process of writing. Granville was an intern of mine in 1985, when I published Baltimore’s City Paper, and upon graduation was hired as a reporter. He was a pup, willing to comb the streets, interviewing various bad men in search of a story, and, after hours, was a lot of fun gallivanting around what passed for the bar & club scene in Baltimore. I wondered how old he was now, guessed correctly at 47, and marveled that I’d now known Granville for more than half his life, even though it seems like we’d first met maybe a decade ago. The calendar zips by, I tell my sons, which naturally falls on deaf ears, given that neither of them are yet 20.

Anyhow, after Granville took his leave, I remembered it was Oct. 27, the birthday of a childhood friend who lived two doors down from our family in a 50s-style housing development on Long Island, in the then-quiet town of Huntington. The words “housing development” today sound ominous—if not as bad as “the projects”—but if the 14 identical (from the outside) houses weren’t really fancy, it was a quite common early suburban lifestyle for the aspiring low end of the middle class, and, as I knew no other sort of upbringing, it was pretty swell, with the schools in walking distance and lots of unspoiled land to explore.

Dicky’s family was marginally better off than ours, I reckon, with a finished basement (ours was the receptacle of collected junk and my dad’s makeshift work shop, and the place where all seven of us gathered several times a year when during a violent thunderstorm water cascaded through the faulty windows onto the cement floor), and a cabin cruiser boat that the father, Mort—a Navy man, as I recall, from WWII—proudly paddled around Huntington Harbor.

Dicky (it’s hard to imagine parents giving a son that nickname today, but in the 50s Richard was the seventh most popular, compared to 41st in the 90s) was an intelligent kid, a decent athlete who could run like Maury Wills, and not often a troublemaker. But he was a little off: the kind of person whom you’d hang around with in the neighborhood but barely acknowledge at school. That sounds kind of cruel, and I guess it was, although I’m not particularly embarrassed about it. A relatively benign caste system did exist in suburban childhood, and it was a natural force that was beyond my ken at the time, a touch Darwinian and nasty, meaning that some kids got the short end of the stick.

Not that Dicky and I would’ve been friends had we not lived so close together and our mothers good friends who yakked about neighborhood gossip and sometimes politics nearly every day. He was kind of a nerd—or “dip,” a label that preceded nerd—and very, very uncool, wearing white socks and ironed jeans and not discovering the Beatles until 1967, which was, of course, unfathomable. He also had the misfortune of having crummy teeth (and lethal halitosis) and so got braces as a fourth-grader, which back then required headgear and all sorts of metal and retainers and other ugly stuff; so he was the butt of jokes at school. (My bottom teeth were crooked, but in the 60s such cosmetic dentistry was not cheap, and thankfully there was no money to put me through such torture.)

Yet, some of Dicky’s unpopularity was because of his personality. For example, when JFK was assassinated in ’63, after we got home from school Dicky rode his bike around the cul-de-sac in the neighborhood, yelling, “Kennedy’s Dead!” and even as an eight-year-old I found that horribly offensive. A couple of years earlier, kind of pissed off that his family was Jewish and celebrated Hanukkah, he took it upon himself to tell me that Santa Claus was an imaginary character, a fact that I was just discovering, and would’ve preferred to contemplate, at six, on my own. Another time, as we were chewing wads of Bazooka and competing for blowing the biggest bubbles, he asked an extraordinarily strange question: “If one of your brothers was killed today, who would you pick?” I was speechless, disgusted really at such a query, and even more creeped out when he quickly sacrificed his sister rather than his older brother. I didn’t swear at the time, but did say, “You’re messed up, man,” and scampered off to a touch football game at the top of the hill and tried to forget that twisted conversation.

As a pre-teen I spent a fair amount of time at Dicky’s house—my own was such a mess that my mother prohibited most guests, at least those under the age of 17—along with neighborhood kids, and we’d have marathon Monopoly games, check out his father’s requisite stash of back issues of Playboy, and make phony phone calls. One time, in fifth or sixth grade, Dicky and I were paired for a science project, and as I was artistically challenged, it was a good deal since he carried the ball. We were constructing a medieval fort with sugar cubes, and decided that some melted toy soldiers would add a winning flourish. The plastic was at a boiling point and Dicky took the pot off the stove and promptly spilled it—on my left arm. The pain was excruciating, and, even worse, his mom (a nurse) came home at exactly the wrong moment, panicked, and tore the melted Yankees and Rebels off my flesh. My arm was a bloody mess for weeks—although the scab-picking was outstanding—and to this day I still have a scar from the incident. We both got into a bit of trouble for this mishap, the stupidity of the act far surpassing any sympathy for the pain yours truly was suffering.

As we progressed through junior high and high school, I saw far less of Dicky as we both gravitated toward more natural circles of friends. I don’t recall where he went to college, but a few years after we both graduated I received a letter from him, which was mildly interesting in a pre-Facebook way of closing a chapter on a boyhood acquaintance. I returned his correspondence, assuring him that contrary to his wayward information, I was not a speed freak, and that was that. Then, in 1993, I attended a 20th high school reunion, and noticing Dicky’s absence, asked the event’s organizer whatever became of him. It turned out, Glenn told me in a sorrowful voice, that Dicky was killed in a car crash in Seattle at the age of 30. I felt terrible for his parents, genuinely nice people who just happened to spawn three not very likable children, did a “There but for the grace of God…” in my head, and slowly drank a bottle of Coor’s beer.