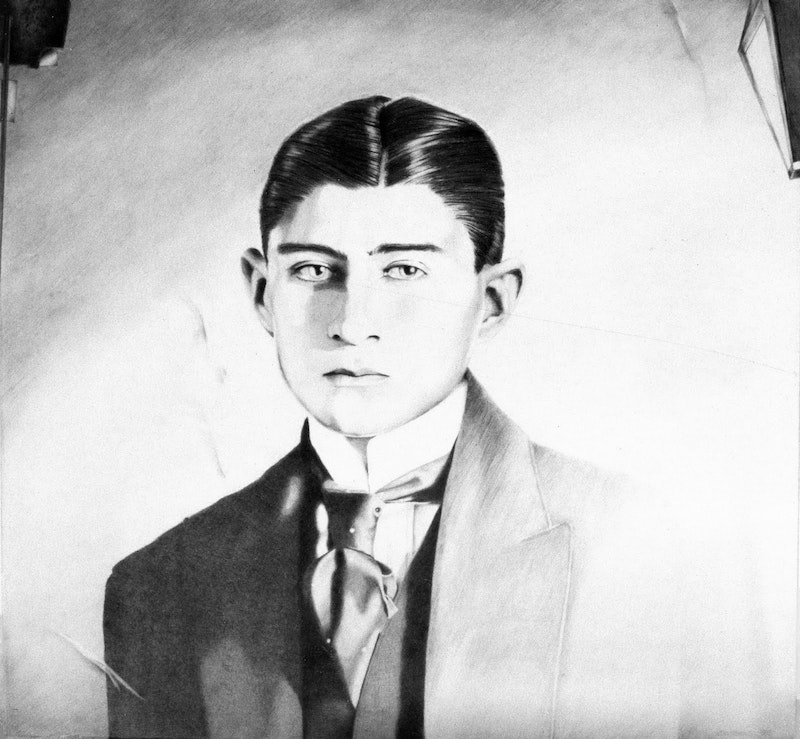 Kafka's "A Hunger Artist" is about an artist/performer who starves himself for the amusement of the public. Alas, his artistry and dedication are unappreciated, and so he dwindles to nothing alone in a corner of a dirty cage.

The tale is the first selection in Kafkaesque, a new anthology of stories inspired by Kafka and edited by John Kessel and James Patrick Kelly. The choice to open with "A Hunger Artist" seems a deliberate tug at the well-read reader's heart. Kafka, after all, may have thought he would vanish, but instead, here he is, more robust than ever, inspiring anthologies full of followers. Kafka now seems less like the hunger artist who died alone and unmourned in the straw, and more like the panther who replaces him as an exhibition, a personality so magnetic that "the spectators crowded around the cage, and did not ever want to move away."

It's a poignant irony—and as such, it's very un-Kafkaesque. Kafka's stories are certainly filled with irony, but those ironies aren't sweet or comforting or triumphant. They're baffling and claustrophobic, disappearing into themselves much as the hunger artist collapses into his skin. Kafka wasn't sentimental, not so much because he looked at the world with cold dispassion as because his creations were so intensely claustrophobic. It's hard to be sentimental when everyone, even yourself, is just a thing in an ever-shrinking, and dreamer-less dream.

Kafkaesque is then a contradiction in itself—it implies a communal experience where there is not even any identity. The stories in the volume most consistently betray Kafka's spirit when they insist—helplessly, inevitably—that that spirit exists. Paul Di Filippo imagines Kafka as a superhero fighting crime in New York; Jonathan Lethem and Carl Scholz imagine him as a writer for Frank Capra in Hollywood; Philip Roth has him as an aging Hebrew school instructor; Tamar Yellin has him as a cute old man with a terrier in Wales; Carter Scholz (again) puts him in a hotel with Wallace Stevens and Charles Ives. It all has a bravura pomo smugness; Gregor Samsa awaking suddenly to find himself on This American Life. The point of each of these stories is that the author knows Kafka and can send him where the author wills. The point of Kafka's stories were always the exact opposite.

The selections that don't feature Kafka as a character often work better, but still encounter similar problems. Eileen Gun recasts "The Metamorphosis" in a corporate office… with a more upbeat ending. T. Coraghessan Boyle recasts The Trial in a service garage… with a more upbeat ending.  Indeed, "The Hunger Artist" is alone in the collection in the sordid, insignificant manner in which it offs its protagonist. If anything's Kafkaesque, it's having your hero shot at the end "like a dog," but nobody here has the stomach for it. Instead, the writers prefer more congenial strategies, whether ambivalent personal epiphany (Tamar Yellin, Michael Blumlein); ambivalent apocalypse (Theodora Goss.); or ambivalent anti-climactic domestic mundanity (Jeffrey Ford.)

The best stories, though, are the ones that not only don't feature Kafka, but don't even seem particularly inspired by him. J. G. Ballard's "The Drowned Giant," Borges' "The Lottery in Babylon," and Damon Knight's "The Handler" are all sideways parables, but there is nothing in any of them that seems to especially demand Kafka as a predecessor. In fact, all seem closer to each other than any of them do to K.

Specifically, Kafka is obsessed with parables of the pains of failure and diminishment. Ballard, Borges, and Knight give us, instead, parables of the pains of success, or at least expansion. Knight's effort is about a boisterous, beloved life-of-the-party who is actually (to everyone's embarrassment) a suit worn by a diminutive, boring, sweaty square. Ballard tells about a giant swept up onto the beach whose body parts live on as Brobdinagian mementos spread throughout the city. And Borges' "The Lottery in Babylon" is about how a mysterious company institutes a lottery which becomes so popular that eventually everyone and everything bows to its totalitarian regime of chance.

Kafka may be the one who was adjectivized, but Borges seems like the more influential writer, both in general and in this anthology specifically. Theodora Goss' "The Rapid Advance of Sorrow" is self-consciously "magical" and profound in a way that's much closer to bad Borges than to bad Kafka. It's Borges' daemon, not Kafka's, which is responsible for all those Kafka's of infinite alternate earths. And the proliferating parts of Ballard's giant insistently echo the mysterious diffusions of Borges' "Tlon, Uqbar, Orbis Tertius."

Borges multiplies and insinuates and conquers, then, rather like the lottery he writes about. Not coincidentally, "The Lottery of Babylon" can be read as a metaphor for the sinister exhilaration of capitalism, Babylon's "infinite game of chance"—with everything, even the omnipotent corporation, dissolving into a rage for randomness—seems like the perfect Libertarian wet dream.

Capitalism is totalizing and expansive; it crosses borders to turn everything into itself. Borges didn't exactly approve, but he understood. So does Boyle, whose protagonist is trapped in the garage until he figures out that he has no choice but to buy a crappy car from the proprietor. So does Michael Blumlein, whose fashion designer finds odd inspiration in a giant wasp, a winged avatar of success that flies away at the last minute. Endings open out into irony or nothing, but they do open, in thrall to the lottery and its ominously friable possibilities.

Kafka didn't see things that way. He wasn't a world-builder or a world-solver, displaying his parables like coins for some secret slot machine. His stories have no possibilities, ominous or otherwise. As the Hunger Artist is dying, he explains that he only starved himself because he had no choice; he could never find what he wanted to eat. He's a failed consumer, left out of the rat race not because he lost, but because he couldn't figure out how to play. Nothing absurd or unexpected happened to him; his life just narrowed and narrowed until, off to the side of desire, it guttered out.  No wonder everyone prefers the panther, which knows what it likes to eat and exudes the crude virility of wanting from behind its bars. It, not Kafka, paces through these pages. Kafka's dead.