It's a disco at the team's new digs, and a very unpleasant place to watch a ballgame. 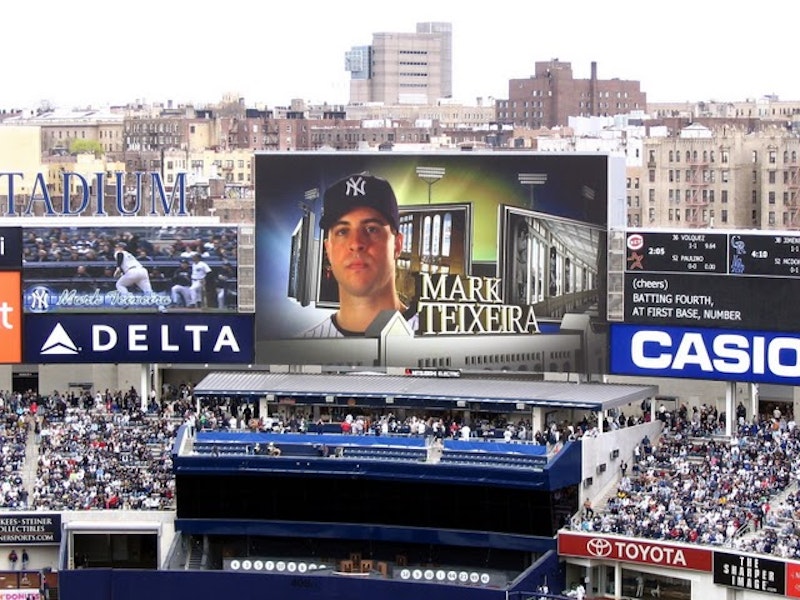 The myth of New York Yankees “class” has long been debunked, and it’s probable that the only people who still believe are innocent 10-year-old little leaguers and the team’s Minister of Propaganda, Michael Kay, frontman of the franchise’s YES cable television station. Still, after attending a day game at the new Yankee Stadium last Thursday—a blowout win for the home squad against the injury-plagued Detroit Tigers—I was struck by just how crass the organization has become in the past decade. YES is, of course, abominable, so creepy on many levels, including Kay’s hysterical commentary when Robinson Cano makes an ordinary throw to first and the mere presence of Ken Singleton, a fine Major Leaguer who never played for the Yankees but is now fully indoctrinated in the House that Ruth/Jeter Built ethos.

What’s more appalling, now that I’m inured to YES, is how garish the new stadium is. Upon visiting it last year in its inaugural season, what grabbed my attention, and disgust, was how the edifice resembled an Albert Speer construction, cold and steely, with huge banners of past and present Yankees stars instead of swastikas. This time around, the new Stadium is more lived-in and properly dirty, but the noise level has increased by a factor of at least four. I’m not talking about the fans either, who actually are far more congenial than in the 70s and 80s, even if it still mystifies me why a 45-year-old man would wear a Yankees replica jersey with the name of Jorge Posada or Nick Swisher on the back. I’ve no idea how many employees operate the electronics at the Stadium, but it’s clear they’re enjoying the same lift that’s gotten Roger Clemens into so much trouble. Classic rock—a staple at most ballparks these days in between innings—is played so loud that it seems like you’re at a raucous concert. Except I’d never pay even two beans—then or now—to see the Eagles or Aerosmith play live.

Meanwhile, the jumbo scoreboard replays Yankees highlights from previous games—if I saw A-Rod’s inconsequential 600th homer one more time I might’ve barfed on my son’s head—complete with a running commentary from some anonymous blowhard. I happen to like advertisements at ballparks, but at Yankee Stadium now they shift every five seconds in the wrap-around environs, giving the park a distinctive Las Vegas glow, which induces instant vertigo. During the game, replays of mere singles are shown, as if the Yanks were the Pittsburgh Pirates and such feats were rarities. Oh, and there are any number of calls for spectators to cheer—like a Yanks fan won’t be on his or her feet when the team has the bases loaded and Cano at the plate—and special “rally” tunes are played even when the game’s a laugher.

Leaving that game and riding the 4 train back to Manhattan I felt a wave of relief washing over me, even though the car was packed and a pair of carneys were attempting to wrest a few bucks from straphangers with a pleasant enough rap routine. By contrast, when I went to Camden Yards on Sunday (Aug. 22), it was with more appreciation of why that stadium, despite housing a miserable team for over a decade, is rightly praised as one of MLB’s most enjoyable parks. Yes, it still annoys me when a Bird gets a hit and the scoreboard reads, “Nice hit!” as if the fans are all knuckleheads, but in comparison to Yankee Stadium, which treats each game like a multi-media riot-fest of Bronx Bomber mania, an afternoon or evening at Camden Yards is a relaxing experience. Sort of like how baseball ought to be: leisurely, a time to chat with friends and section and neighbors and root at pivotal points in the game.

Or to merely admire the play of the field: at the Sunday game, for example, a 6-4 win by the Texas Rangers over the rejuvenated O’s (under new manager Buck Showalter), it was jaw-dropping to watch Rangers’ outfielder Josh Hamilton, who’s performing right now at an otherworldly level. Hamilton, who squandered his early 20s, shooting junk, hit a long homer in the first inning over O’s batting practice pitcher Kevin Millwood, but what was even more impressive was the bullet he slammed into right field during his next at-bat. I can’t remember seeing a ball hit so hard and fast, at least this year.

Anyway, the Yanks have the best record in baseball and, in all likelihood, will be favored to win a second consecutive World Series, a prospect that makes me ill, and might only be mollified if the Democrats are slammed at the polls on Election Day. I grew up hating the Yankees, but did admire their classic pinstriped uniforms (which never really changed, even during the leisure suit 70s) and management’s refusal to cheapen the product. Now, with their new Stadium, which attempts to out-do every other MLB ballpark with gimmicks and attractions that have nothing to do with baseball, the Yankees have forfeited any right to proclaim an aura of “class.”