The Yankees Have Their Thumb on the Panic Button

Will their pitching staff hold up against the formidable Tampa Bay Rays? 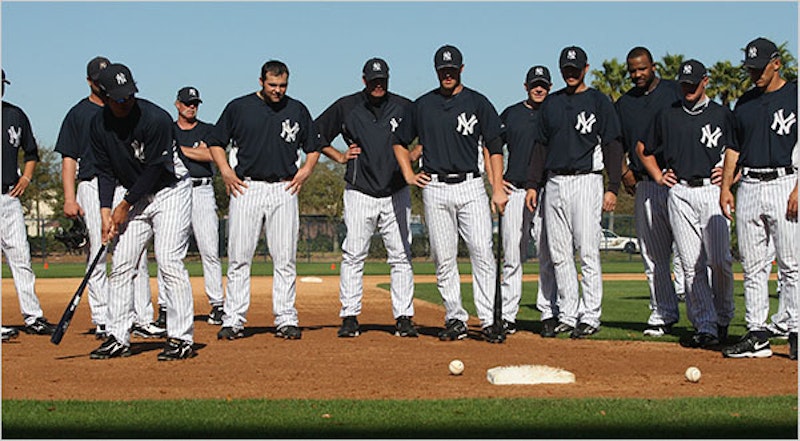 The New York Yankees are tied for first place in the AL East, and the best record in baseball, with the Tampa Bay Rays. On the surface it's business as usual in the Bronx; however the Bombers find themselves in a precarious situation. The best pitching staff $206 million can buy has some serious dents in the armor.

Andy Pettitte ($11.75 million) is on the DL with a strained groin, AJ Burnett ($16.5 million) has struggled all season, and Javier Vasquez ($11.5 million) has an ERA over 5.00 and is now in the bullpen. I’m hardly shedding a tear for the Yanks; for crying out loud they have nearly $40 million dollars in 2010 salary invested in pitchers that aren't even producing. But you can bet GM Brian Cashman is nervous.

Things have gotten so desperate that the Yankees started a rookie pitcher, Ivan Nova, against the Blue Jays on Monday night. Nova, a 23-year-old right-hander, pitched admirably but lost. On Tuesday manager Joe Girardi sent journeyman Dustin Moseley to the mound to battle the Jays in the thick of a pennant race. Moseley threw 6 solid innings for his fourth win as the Yankee lineup bludgeoned the Toronto staff.

I'm sure Girardi never envisioned starting Nova and Moseley on back-to-back August nights while tied for the division lead. The assumption with the Yankees, when concerns arise, is that they’ll obtain the best available player on the market to fill a hole. But the AL West-leading Rangers beat them to the punch on Cliff Lee and New York has been left scrambling. The fact that the team’s offense leads MLB in runs allows the Yankees to mask their weaknesses in the regular season. The Yankees run up an opposing starter's pitch count better than any team this side of Fenway. They get into your bullpen early and feast on middle relief.

When it comes to the postseason the pitching gets better as back-end starters and middling relievers take a seat at the end of the bench. The Yankee offense will be slowed down in the playoffs as the competition improves, making starting pitching a priority. The team won't repeat as World Champs unless old warhorse Pettitte returns from his injury and either Burnett or Vasquez find a groove that's eluded them thus far in 2010. The impeccable CC Sabathia will once again be a postseason beast, but 15-game winner Phil Hughes, who got hammered by Toronto on Wednesday night, may soon be shut down for the season. Hughes has pitched just over 140 innings this year. Last season between New York and AAA Hughes pitched around 100 innings. He logged 70 innings in an injury-marred 2008 season. The Verducci Effect has led teams to be very careful during the season with their young pitchers. Allowing Hughes to pitch deep into the playoffs could put his future health at great risk. If the Joba Rules from a few years back are any indication, Hughes may be shut down or sent to the bullpen sometime in September.

I fully expect the Yankees to make the playoffs, to my chagrin, but I think Tampa Bay's ridiculously deep pitching staff will lead the Rays to the AL East crown. As the American League’s wild card the Yanks would likely take on the Rangers and Cliff Lee, who baffled the Bombers in the 2009 World Series. A few Lee-Sabathia rematches will make for riveting TV in October.