Vladimir Guerrero Soon To Be An Oriole?

After his stint with the Texas Rangers, Guerrero is once again a free agent. But can Baltimore seal the deal? 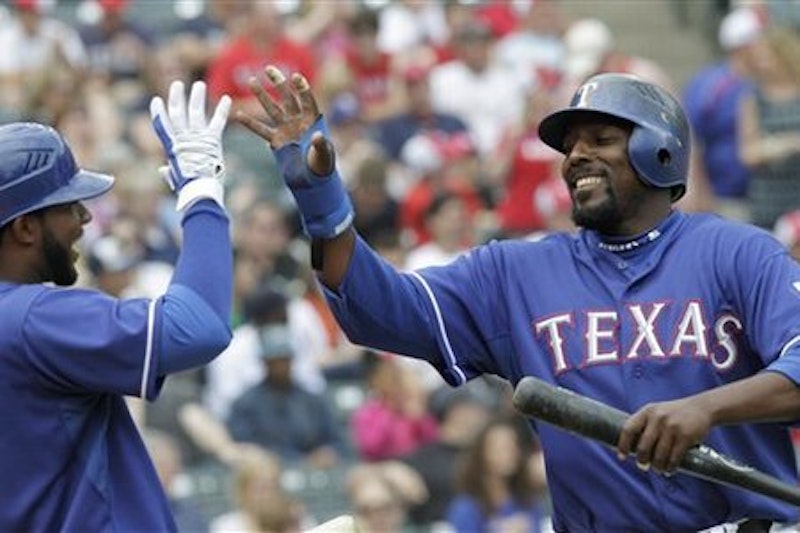 Much to my surprise, the Baltimore Orioles have had a productive off-season. Although the Birds low-balled sluggers Adam Dunn and Victor Martinez, the additions of Derrek Lee, JJ Hardy and Mark Reynolds might spell the return of Major League caliber baseball to the city. GM Andy MacPhail and the Orioles now have the opportunity to put a nice pretty bow on the winter, as DH Vladimir Guerrero is a man without a team just weeks before spring training.

According to multiple reports, the team has made a one-year offer to the slugger. Guerrero found himself in a similar situation last year before agreeing to a one-year contract with the Texas Rangers. Now, 12 months and a trip to the World Series later, Vlad looks to be on the move again. A deal between the O's and Guerrero has been about seven years in the making for Baltimore's fans. In the winter of 2004 then-GM Mike Flanagan put the full court press on Vlad and Miguel Tejada in the hopes that landing the two premier free agents would reverse the franchise's fortunes. Flanny went one for two as Vlad wisely signed with the Angels and the O's sunk further into the abyss.

I don't see a downside to the Orioles signing Guerrero. Over the past few days I've heard fans talk about how he would block Felix Pie and Nolan Riemold from getting regular at-bats. Uh, yeah, and that's a problem? I'm all for giving young players a chance but Pie and Riemold aren't a pair of 20 year old can't miss phenoms. Riemold is now 27 and hit a whopping .207 with a .610 OPS last season. Riemold wants to be Vladimir Guerrero when he grows up. I know Riemold had a star-crossed 2010 that started on a bad note, but he hasn't earned anything. Signing Vlad doesn't mean that Pie and Riemold won't play at all; it just means that they'll have to compete for at-bats and produce when the opportunity arises. Healthy competition among players is a positive step for the Orioles. It sure would have been nice to have someone push Julio Lugo and Garrett Atkins last season.

If Guerrero does bring his talents to Baltimore it will mean a lot of innings in left field for Luke Scott. Scott gets a bad rep for his defense. He's not going to win any Gold Gloves, but anyone who watches the team on MASN can tell you that Riemold and Pie are no less an adventure in the outfield. Scott had his best offensive season in 2010 and figures to be an important cog in a rejuvenated 2011 lineup either as the DH or LF.

A deal with Guerrero would create some buzz, sell tickets, and lead to a few extra wins for Buck Showalter’s Birds in 2011. Adding Guerrero to Lee and Reynolds would bring some serious right-handed thunder to the Orioles popgun offense; not to mention some protection for young players like Matt Wieters and Adam Jones. With or without Vlad, MacPhail has made good on his promise to improve the club's woeful offense without sacrificing the stockpile of young hurlers. It's likely not enough to make the Orioles contenders this season, but they could be entertaining; which at this point is about all that I can hope for.