The Red Sox's Farm is Stacked

Adrian Gonzalez and the 2010 draft. 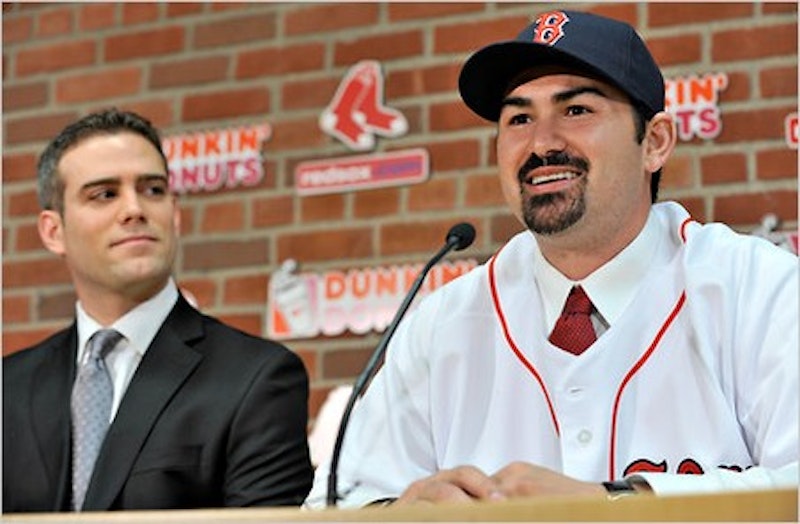 On Jan. 26, ESPN’s Keith Law evaluated the Red Sox’s farm system as the 11th best in baseball. While that’s a fairly high ranking, it doesn’t give due justice to the promising talent in Boston’s deep minor leagues. In 2011, their Double-A and Single-A affiliates will be loaded with high-ceiling bats and arms that could easily vault their way to the top of many mid-season prospect rankings with a strong first half. In past years, younger players for the Sox and Yankees have generally been overrated. Good ‘spects become great ‘spects, and great ‘spects become superstars. In 2008, Law gave Joba Chamberlain and Clay Buchholz the number three and four spots, respectively, well above many other equally promising players. 2011, however, is different.

After the Adrian Gonzalez trade, a number of analysts immediately figured that the Red Sox’s farm system had been tapped of all its high shelf talent. Casey Kelly, Anthony Rizzo, and Reymond Fuentes were shipped to San Diego to acquire the slugging first baseman. Even if Boston had kept those three players, their current farm hands are still more valuable. Kelly had a rough debut for Portland, and it just got worse in the Arizona Fall League. Rizzo had a successful year at first glance, but deeper observation reveals his immense struggle with left-handed pitching and questionable ability to maintain a steady batting average.

Without the highly successful 2010 draft, this article wouldn’t have been written and Gonzalez likely wouldn’t be playing in Boston. Kolbrin Vitek, Bryce Brentz, and Anthony Ranaudo were all picked in the first round, but the real prize of 2010 comes in two above-slot high school bats, Sean Coyle and Garin Cecchini. Both middle infielders growing up, Coyle looks more like a doubles hitter while Cecchini packs power. Dustin Pedroia and Chase Utley represent the ceiling for these two youngsters. Pedroia is a perfect comparison for Coyle, who is also short and an igniter in any lineup. Oscar Tejeda, another young second baseman, put together a booming 2010 campaign. At only age 20, he hit .307 with 11 home runs and 17 stolen bases in high Single-A. His overconfidence is sometimes mistaken for cockiness and several evaluators feel that he is an attitude problem waiting to happen.

Ryan Kalish is already a household name is some New England homes. Though batting a mediocre .252 with a week OBP, Kalish delivered timely clutch hits from the day he was brought up. Likely to start the year in Pawtucket, don’t be surprised if he replaces J.D. Drew as the everyday right fielder in mid-June.

Pitching is a little thin in the higher levels, but Stolmy Pimentel, Drake Britton, and Ranaudo represent an excellent trio of young hurlers. Britton, the sole lefty, broke out last year with a 2.97 ERA in Salem. Pimentel, his teammate for most of the season, wasn’t as successful but got better reviews across the board from scouts. Finally, Ranaudo famously pitched to a 0.00 ERA in multiple Cape League games.