The Preakness, the most disturbing display one columnist has ever seen, is getting cleaned up this year. Will the plan work? 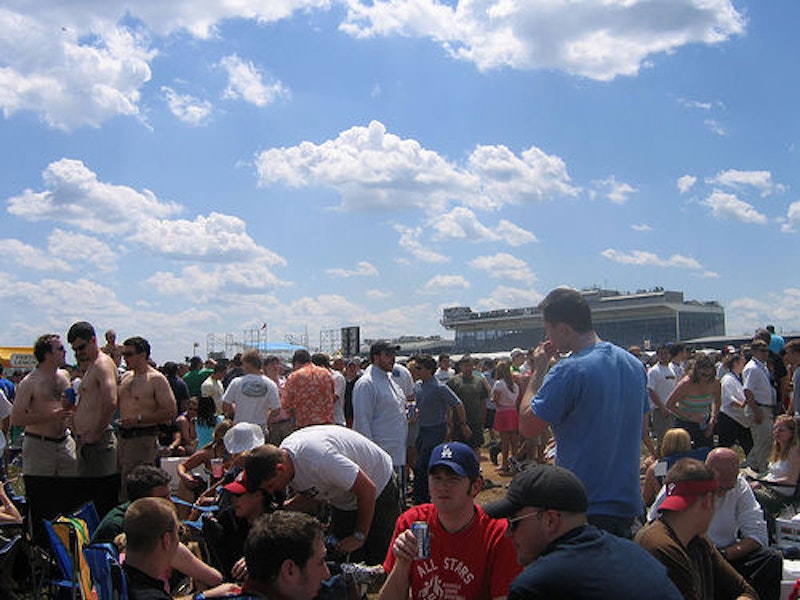 Her eyes had that drug-addled, lazy glaze—not quite cross-eyed, but not quite looking at you, either—as she ambled up to where we were standing. She was pretty, about 22 years old, but she looked worn and exhausted. She came up to us and said, “Where is the stage?”

The stage, in the middle of the Pimlico infield, couldn’t have been more than 50 yards away, quite conspicuously rising above the throngs of people. All this girl had to do to find it was turn around. I directed her to the stage, but she had gotten distracted. She pointed to the beads around my friend’s neck and said, “Those are pretty, can I have some?” Half-jokingly, my friend told her he would exchange the beads only if she flashed us her breasts. We were all a bit surprised when she did so without a moment’s hesitation, and my friend—a bit dazed by her instant readiness, I think—quietly handed over his beads.

She said she had to meet her friends at the stage and couldn’t make it alone, so I offered to walk her. She hung on my arm to the point where I was practically carrying her for the brief walk over. In the two minutes we were alone, she began crying, telling me how stupid she was for staying up all night doing coke and then following it up with a day of a drinking. As we neared the stage, I began to wonder if I shouldn’t find some sort of authorities to get this girl from help. Once we got to the stage, though, she decoupled herself, said she was where she needed to be, and disappeared before I could even think about finding aid. I saw her an hour later: two burly, drunken, middle-aged men were laughing, taking topless pictures of her. As I walked past the scene, one of the drunkards tried to show me the still in his digital camera. And this wasn’t even the most disturbing thing I saw that day, almost exactly three years ago, during the 131st running of the Preakness Stakes.

There are things you never forget, things you can’t un-see, and there are the things that happen at the Preakness. It is, without hyperbole, the lowest point of humanity I have ever witnessed. I have never been so appalled by the human race. This chapter in Preakness history seems about to end. Fans may no longer bring their own beverages to the infield, a new rule sparked in part by the prevalence of disturbing YouTube clips and a general attempt to tamper down the brutal insanity of the Preakness infield.

Cans probably won’t be missed. During that same Preakness, I watched a kid about 50 yards away climb one of the big trailers that houses offices or first aid. He got up and started dancing, thrilled that he had made it to the top. Out of nowhere, a beer can landed next to him, and he started laughing. Then, another struck even closer, and his laugh looked a lot more nervous. Before long, a barrage of aluminum beer cans—most unopened—began pummeling him, and he fell to his knees and eventually to the fetal position, covering his face. During the bombardment, cans started crashing near me, whizzing past my head, even though I was at least half a football field away from the scene.

Banning BYOB and replacing it with unlimited, accessible beer for purchase (and at $3.50, it’s cheaper than a lot of bars and much cheaper than a normal sporting event) probably won’t do too much to the atmosphere save for clearing the skies and possibly adding a couple years to the age of the average attendee. It probably won’t even stop New York Giants and Philadelphia Eagles fights from getting into bloody fistfights during the races. Yes, ticket sales are down, but even the Derby saw a decrease this year, what with that pesky recession and all. A chapter in the Preakness’s story ends, but gloom-and-doom forecasts about the end of Preakness as we know it feel overblown.

From accounts of friends, though, the last Preakness wasn’t quite as debauched or outrageous as a few of the previous ones, despite the lax-as-ever regulations. This new rule may be only the symbolic end to what was a bizarre period for privileged, college-aged Americans. During the past decade, intoxication and random violence burst into public life at massive gatherings of 18-22 year olds.

Over the last 10 or so years, riots and drunken violence became more visible among college kids than they had since the end of Vietnam. Take a look at Wikipedia’s list of riots, and you’ll notice a dearth of student–age riots for most of the 1970s, 1980s, and early 1990s. In 1998, though, Washington State University students rioted to protest an on-campus alcohol ban. Less than a year later, Michigan State students rioted after their loss in the NCAA tournament. Seemingly out of nowhere, the riot came back into vogue and the culture of excess and violence went gangbusters.

These riots were not the response to unfavorable government policy or injustice. Instead, they were riots seemingly for the sake of rioting. The spark was often mundane in the scheme of things, like a campus-wide alcohol ban or a sporting event. Woodstock '99 practically burned to the ground because water was overpriced. University of Maryland students rioted after their women’s basketball team, hardly the bearer of Terrapin hopes and dreams, won the championship.

Before the 2006 Michigan-Ohio State football game, everyone assumed that win-or-lose Ohio State fans would literally set Columbus on fire after the game, much as they had the last time a National Championship berth was at stake in 2002. I attended that game, and while the scene after was certainly atrocious—verbal and physical assault, though mostly of the grabbing and pushing variety, rather than the punching and stabbing kind—there was no rioting.

The night before the game, a few Ohio State students began telling me about their plans to riot the next day. They had apparently stashed a couch they were ready to burn, that is, until one of their friends informed them, “Sorry, ___ said he really needed that couch.” There was a moment of silence followed by a deadpan “Bummer” and the conversation kept rolling along. I knew right then and there that something had changed, the whole routine seemed too stale to organically erupt in 24 hours. I didn’t get how it could work.

Not five months earlier, I saw something I can’t forget. After peeing in the corner of a port-a-john (it was overflowing so I decided to take the previous occupant’s advice) and trudging through what had become a field muddy with feces, I was beginning to grow weary of the Preakness. The sun was beaming down. It was unbearably hot. Sitting around with friends, I found myself gazing up at the sun dresses and suits marking the gentry up in the stands, looking over us like Dickensian overlords. Then, out of the corner of my eye, I saw something so bizarre that it didn’t seem real.

A man, about 30, pulled down his pants and begun peeing in the infield. On a girl’s leg. And she was so drunk she didn’t notice. There is something chilling about seeing an act you find disturbing that doesn’t appear to ruffle anyone else’s feathers. In fact, no one noticed the peeing man. I thought I was hallucinating, but I assure you I was not (I was actually entirely sober). This man peed on another human being and no one—not her friends, not my friends, not those around him—noticed.

There are probably explanations as to why the riots, the violence, and the brutal public drinking have tailed off: a more somber national mood due to the economy or the trudging wars, kids growing weary of the predictable craziness, increased youth optimism in the wake of Obama. The memories may be exciting and fun for most of us, but the undercurrent of sexual assaults, injuries, and, frankly, a general mistreatment of others won’t be missed. Good riddance, and hopefully these regulations can stay in place to keep it from happening again.