The Spots Heard 'Round the World

Is baseball turning into Nascar? A very special Splice column brought to you by Frito-Lay. 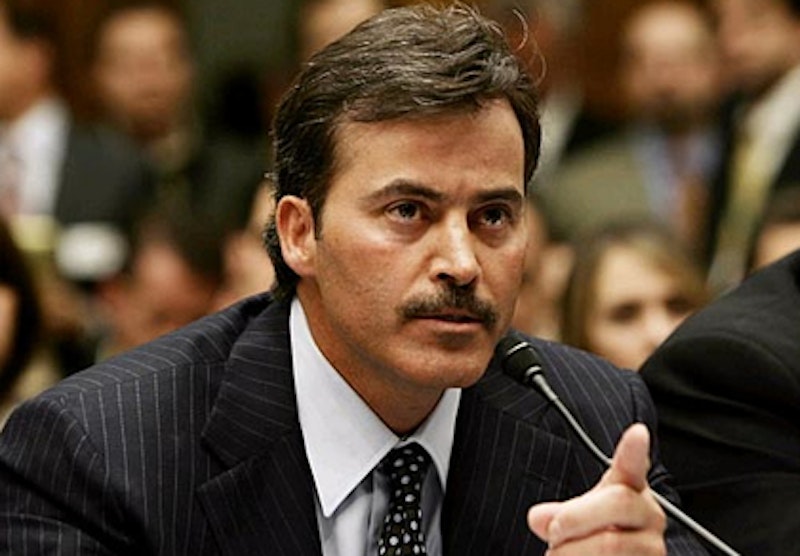 Rafael Palmeiro, who very much wants you to know that side effects of Viagra may include nausea, diarrhea, fingernail softening, and perjury.

Quick show of hands for all baseball fans: What do you remember former Rangers and Orioles slugger Rafael Palmeiro for? His combination of over 3000 hits and 500 home runs, which, once achieved in 2005, had sportswriters ticketing him for Cooperstown? Nah, of course not: those numbers, once he was exposed as a liar about using steroids, were rendered meaningless and he’s never been heard from since. Although I don’t share the common indignation about ‘roids or other PEDs, Palmeiro’s finger-wagging show of defiance in front of star-struck politicians was rather audacious and foolhardy, and for that alone he probably deserves his current place in sports purgatory, although with all the cash he’s made it’s probably fairly comfortable.

While dour Raffy has left the stage of American sports, I do think about him from time to time while watching a baseball game on Fox, ESPN or any of the local broadcasts via the MLB “Extra Innings” package. It was only six years ago that Palmeiro, a strong and vital athlete, accepted a $500,000 endorsement fee from Pfizer to become baseball’s pitchman for Viagra, which always struck me as kind of weird since he was just 37 at the time and, one might suppose, not in need of the magical blue pill that’s become so ubiquitous in American culture.

Given his recent history, Palmeiro’s insistence to Pittsburgh Post-Gazette columnist Chuck Finder in June of ’02 that yes, in fact, he was a victim of erectile dysfunction, seems a little fishy, but who knows (or wants to know). Frankly, I think the half-million he received softened the initial teasing he took from fans and teammates, but he told Finder: “It’s not really a joking matter. Whether it’s hemorrhoids or hair loss or… none of us is perfect. Some of us have diseases or defects or flaws… I deal with the truth that way and decided [to become Major League Baseball’s spokesman]. So it doesn’t do any good to make fun of a problem. When it comes to our society, we’re a little messed up in that regard.”

Anyway, in the six years since Palmeiro went public with his (real or not) affliction, MLB is awash with advertisements of the medical sort, in addition to the usual bevy of car, fast food and beer commercials. One of the most frequent ads during Fox Saturday afternoon broadcasts is for Flomax, the prostate drug that will help relieve men from the “going problem.” No baseball stars are hawking Flomax, but it’s irritating nonetheless just because of the language used. You’d think at a time when most drug commercials spend half of the minute or 30-second spot detailing possible side effects, often in what in a more private era would be considered over the top, the company could refrain from the baby talk of a man having “going” difficulties. Wouldn’t it be less bothersome if one of the symptoms of an enlarged prostate was described as a “urinary” complication?

That aside, what really bugs this spectator—and mind you, I’ve got nothing against advertising, and, like a lot people, really get a hoot out of the Geico cavemen and the Aflac duck—is that companies are now infiltrating the broadcast of the game itself, instead of just between innings. For example, last Saturday when the Yankees and Angels were shown on Fox, one of the announcers said, after the Halos broke the game open, “Here’s the Flomax game summary,” and recounted the scoring. An inning or so later, we heard about the “game changing play”—Vlad Guerrero’s homer—“brought to you buy Sharp’s Aquos TV.” When the game was over, the “Chevy Player of the Game” was awarded to Mike Napoli. And we all got to enjoy the “Gillette Fusion Power trivia question” about which Angel was an All-Star in his rookie year (Wally Joyner). Finally, Fox’s rip-off of ESPN’s K-Zone chart, the “Burger King Hot Zone,” which shows a batter’s propensity to hit low or high or wide pitches, irritates throughout the game.

Obviously, it’s not just Fox that’s incorporating advertisements into the broadcasts of games. The inevitable result, as my 13-year-old son predicted earlier this season, is that in five years baseball players will be wearing patches on their sleeves for Coors, Ambien, Budweiser, Taco Bell and whatever other companies have, at the time, huge budgets to play with. MLB might’ve lost the battle in 2004 when it tried a massive product placement of Spider-Man 2 ads for one weekend at all ballparks—fans rebelled—but they’re going to win the war.

Last Saturday night, taking a peek at a Royals-Twins game, Zack Greinke’s pitch count was sponsored, or, “brought to you by,” J.P. Nutter & Co., some local business in Kansas City. Flipping to the Indians-Blue Jays game, the commentator, speaking as if this wasn’t really strange, said, “And now for the Rogaine game summary.” The next day, White Sox announcer Hawk Harrelson (reviled by many for his no-apologies boosterism of the Pale Hose, although frankly I think it’s an act—unlike YES’s Michael Kay, who treats each Yankee homer like the shot heard ‘round the world—and I get a kick out his calling a bloop hit a “ducksnort”) reveled in a Jermaine Dye round-tripper and said, “And here’s the Ford home run replay!” Later, when one of the infielders made an especially exciting barehanded pick up and throw to first, it was shown again as Fruit of the Loom’s “Feel for the game.”

On Tuesday night, Red Sox announcer Jerry Remy said on the team’s station NESN, “The league leaders [in stats] are brought to you by Olympia Sports.” Later on in a very long, strange 19-17 win for the Sox, Remy promised that, “The final out of the game will be brought to you by Foxwoods Resorts Casino.” And, on YES, also on Tuesday, Kay (clearly anguished by a rare blown save by Mariano Rivera) reminded listeners to stay tuned for the Nissan post-game show.

I’m in a bit of a lather about these revenue-enhancing intrusions, but it’ll pass, as do all changes that at the time seem vulgar but over time just become part of the game. The silver lining, at least for me, this season is that Miller High Life has unleashed a massive advertising campaign to re-brand what was once one of the most popular brews in the country. The company, gauging the economic mood of consumers, is promoting Miller as the beer for the regular guy, and is running a series of spots in which a burly employee checks out different outlets that stock Miller. The driver, leading his crew in one of many variations of the theme, busts into a hotel at one point, and, noting the ridiculous prices in the mini-bar, exclaims that the establishment has lost its key to the “High Life.”

The ads are not only funny, but really smart: imported beers are old hat, Budweiser still airs majestic touts of its product, while Miller goes populist. That’s a real shift from a few decades ago when the company declared its beverage as “The champagne of bottled beers.” A skidding market share calls for innovation (its sales were up by one percent in the second quarter according to Advertising Age), and for my money Miller wins the battle.