It's a good time to be a Jets fan. 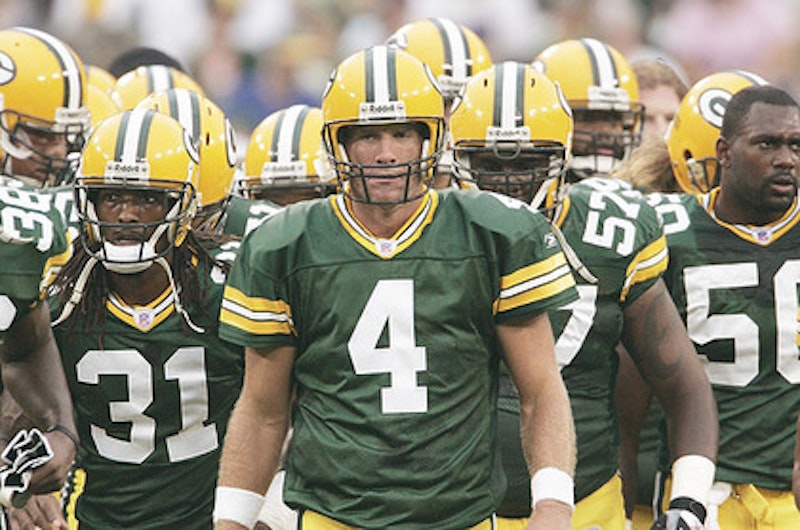 This past February began what has, in recent years, become something of an annual event for NFL fans: The “Will Brett Favre Retire This Year?” game. We’ve seen it all before, as over the last few off-seasons Favre has flirted with retirement, only to then indicate the opposite days later. Little did anyone know, however, that this year’s Favre saga would be the most interesting and dramatic yet.

Unquestionably one of the greatest quarterbacks to ever play the game, Favre began his Green Bay Packer career in 1992. Within only a few years, he’d helped reverse the fortunes of a franchise that had been struggling before his arrival. After the 1995 season, Favre was named the NFL MVP, a feat he would repeat after the 1996 season, when he led the Packers to a Super Bowl win, their first since 1967. In 1997, he again won the NFL MVP award (sharing it with Detroit Lions running back Barry Sanders), and again led the Packers to the Super Bowl, though they fell short that year, losing to the Denver Broncos. But in the space of only seven years, Favre had returned the Packers to a position of dominance in the NFL, and given himself a future place in the sport’s Hall of Fame.

Football players have a short performance window because of the brutality of the game and the constant influx of younger and often better talent. In 2004 and 2005, Favre’s age, and also a number of off-field incidents, began to take a toll on his performance. Entering the 2005 season, Favre was 35, an age by which many NFL quarterbacks have already called it quits. During the 2005 season, it looked as though perhaps Favre should join them, as he suffered through a lousy season, the worst of his professional career.

But in 2007, Favre, in his 17th year, played like a man possessed, having nearly the best season of his career, and leading the Packers—thought to be in a rebuilding year—to an impressive 13-3 record, and a divisional championship. Prior to the start of the playoffs in January, Favre indicated that he was inclined to play another year, and after the type of season he’d just had, it was not unwelcome news in Green Bay. During the playoffs, the magic continued as he led the Packers to within one game of the Super Bowl, losing in a spectacular NFC Championship game to the New York Giants, who went on to defeat the New England Patriots in Super Bowl XLII.

After such a phenomenal season, Favre was drained both physically and emotionally. Once again the retirement questions surfaced, and after the playoff loss to the Giants, Favre said he’d soon be making a decision on his future, undoubtedly prompting a sigh of relief from Packers management. In many ways, Favre owed the Packers a prompt decision, because they needed to be able to address their future—both at the quarterback position and in general—during the offseason, especially with the NFL Draft looming in April.

Resolution arrived this past March, when Favre tearfully announced his retirement. His choice was almost universally hailed as being the right one for him and the Packers. The Packers immediately (and appropriately) began to plan for a Favre-less team in 2008, drafting two quarterbacks in the NFL Draft in April to back up Aaron Rodgers, the highly-touted Cal quarterback nabbed in 2005 as Favre’s heir-apparent. The playbook was retooled to better suit Rodgers’ skills, and coaches and fellow players all voiced their enthusiasm about the new guy’s abilities to step in and lead the team. By June, however, with the Packers now moving forward, murmurs and rumblings from Favre and his surrogates surfaced that indicated Favre was reconsidering his decision to retire.

By late July it was obvious that the “rumors” were true, as Favre officially filed for reinstatement to the NFL. From the emotional and loyal Packers fans, a groundswell of support for Favre’s return began, placing management and the coaching staff in a very awkward situation. On the one hand, the team had made very decisive moves to transition to a team without Favre, but on the other hand, the public relations implications for the Packers were potentially devastating. Clearly, the best thing for the Packers was for Favre to stay retired. The team even went so far as to offer Favre a 10-year, $25 million “marketing contract” that in reality amounted to “pay not to play.”

Finally, the saga came to an end last week. After a four-hour meeting, the Packers and Favre agreed that it was time to part ways. Favre made it clear that all he wanted to do was play, and that his first choice was to play for the Packers. The Packers, however, finally decided that the Favre Era in Green Bay was over. Last Wednesday night, the New York Jets acquired the quarterback.

As would be expected in New York, Favre’s arrival here has been somewhat over-the-top. After being flown to New Jersey on the Jets’ private plane last week, Favre and his family were then given a helicopter tour of the team’s practice facility on Long Island, and of the greater New York area. Then, only an hour later, he was again whisked away by private plane, this time to join the Jets in their preseason opener in Cleveland against the Browns. The next day, Mayor Bloomberg hosted an official welcoming ceremony for Favre at City Hall, showering the exhausted and slightly overwhelmed quarterback with symbolic gifts and effusive praise. “Broadway Brett” blared one NYC tabloid’s cover; “Brett the Jet” read another. The Jets’ first practice with Favre on the field attracted an astounding (and record-breaking) crowd of more than 10,000 people, and tickets to the Jets’ home opener in September are being scalped for five and six times face value. For a team in need of some good news and positive press, the Jets seem to have found both.

A few friends and I made a pact that, were Favre to return to the Packers this year, we would take a trip to Green Bay to see Favre in his last season as a Packer. Now, instead of a 1000-mile trek to Wisconsin, I’ll only have to go 10 miles to northern New Jersey! And yes, I’m one of the people now contemplating spending way too much money to see “Brett and the Jets” take on the Patriots next month. After all, how often will I have the chance to see two future Hall of Fame quarterbacks play against each other in Favre and Tom Brady?

It’s a great year to be a New York football fan.