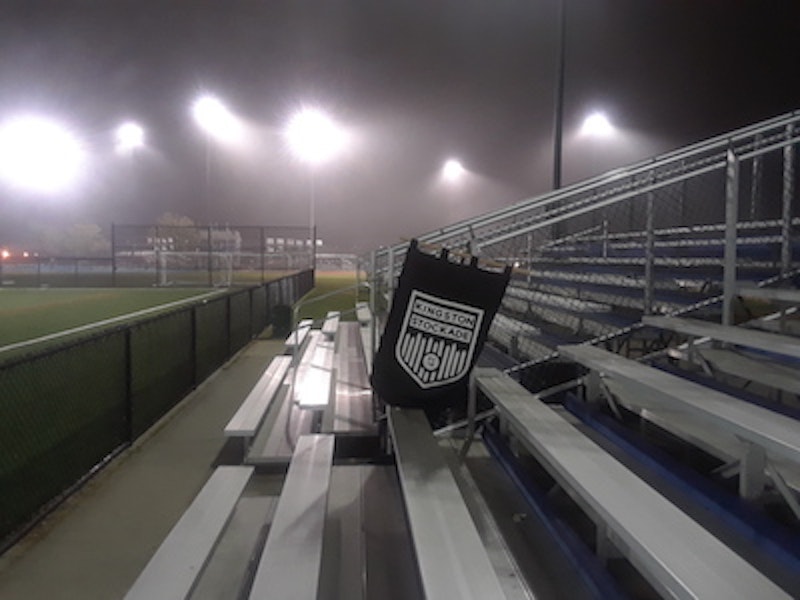 What better way to spend a Wednesday night than riding a Trailways bus almost three hours from upstate New York to Long Island to see two semipro soccer teams have at it in a public park? It was the first round of the 2018 Lamar Hunt U.S. Open Cup, the oldest soccer tournament in America featuring amateur and semipro clubs that get a chance to play the bigger MLS teams if they advance to the later rounds.

My local club, Kingston Stockade FC, earned a spot in the tournament after they won their conference championship in the National Premier Soccer League last summer.

The last time I attended a U.S. Open Cup soccer match was September 2, 1997, with 1201 other lost souls at Columbia University’s Baker Field on a foggy, cool night. The nascent New York/New Jersey MetroStars, in their second season of Major League Soccer action, were entertaining the MLS side Dallas Burn. Most fans, accustomed to the Giants Stadium miasma involved in attending MetroStars home games, got lost wandering Inwood in search of Baker Field. Half of the Metro supporters didn’t even know it was a semifinal match. The MetroStars would lose in 2-1 in extra time.

On the field that night for the MetroStars was Italian legend Roberto Donadoni. He was one of the early European stars who postponed retirement to do the MLS a favor by coming stateside to play in America’s stepchild summer league so hopefully named “Major League” Soccer. From the front rows of the abandoned stadium we could see a look of Felliniesque sadness on the face of Donadoni. He was having a bad hair day, and seemed to be drinking in the shoddiness of the whole scenario. Here was a man who for a decade in Milan used to ignite the massive crowds of 80,000 at the soccer shrine known as the San Siro. Here was a man, then just shy of his 37th birthday, who played in two FIFA World Cups for Italy (’90 and ’94) and there he was ham and egging in front of a tiny crowd on a Tuesday night in a college stadium home to a Columbia football team most deplorable.

Some 21 years later, the Rough Riders were hosting the Stockade, and there was no Donadoni in sight. The Italian is now coaching Bologna in Serie A. It’s a good thing he was not in attendance for the Rough Riders vs. Stockade first round tilt. It was cold and foggy at John J. Burns Park in Oyster Bay, which has a NextTurf field and some metal bleachers that are the home to the Massapequa Soccer Club. The rest of Burns Park is pretty fancy baseball and softball diamonds as far as the eye can see. Snack bars have flat-screen TVs above them showing the Yankees game against Boston. State of the art floodlights loom over lit, working scoreboards. The soccer field, well, not so.

There was a scoreboard for the U.S. Open Cup game but it wasn’t turned on, so the 190 or so in attendance had to keep track of the game like it was their daughter’s rec soccer match in Mahopac. The snack bar was shuttered and Kingston’s band of 75 or so road supporters dwarfed any home crowd for the Long Island team named after Teddy Roosevelt. The pitch is on the fringe of the Burns complex and the requisite strip mall if visible across the boulevard at one end.

A middle-aged Rough Riders fan in a homemade team hat told me this ground wasn’t even their home field. “They play home games at the Catholic school in Huntington,” he said after asking me the score and how much time had elapsed. In the center circle of the field was an existential seagull image. It was, at that point, 1-0 Kingston on a sweet goal by Bruce Jeter, a Marist College player who’s a distant cousin of Derek. He took a cross from the overzealous Pedro Espindola, a University of Albany standout with Brazilian roots. He was the leading scorer for Stockade last season and unfortunately went down with an injury in the middle of the first half. Kingston was decked out in new all-orange kits, honoring the Dutch heritage of the Ulster County city that was the original capital of New York State back in the late-18th century. The Long Island squad seemed to be wearing 2010 Chelsea replica kits.

Much like the playoff loss last summer to Clarkstown SC, Kingston had the lead at half and would end up faltering big time in the closing minutes of the match. The teams were tied 2-2 at the end of regulation, and with two 15-minute periods of extra time, Kingston was down a man thanks to a red card. The Rough Riders would outrun Kingston during the bonus rounds and ended up with a 6-3 win, the same score of the Kingston collapse at Clarkstown.

Many things went wrong in Oyster Bay. Espindola’s hamstring injury, the two yellows to fellow Albany player (also with Brazilian roots) Bernado Mattos, no dressing rooms with functioning showers and of course no scoreboard showing the score and time. It seems U.S. Open Cup officials will look the other way regarding these rules violations.

I managed to get a “Buttafuoco!” chant going amongst the young supporters after a brief lesson in Long Island romantic crime, so that was fun and worth the long bus journey. I’m currently 0-2 when attending U.S. Open Cup matches. So be it. I hope I’ll be back next spring with this same cheeky club. The bus ride down featured a view of “the new Tappan Zee Bridge” as sold by Trailways driver Donna whose passenger list included a mix of young and old, a true sampling of the Kingston semipro soccer demographic. Stockade FC has lost the “team” feeling and feels more like a club now, with familiar faces back to witness a third season of National Premier Soccer League action.

The loss on the Island concludes a busy preseason for Kingston, having lost two friendlies prior to the U.S. Open Cup ouster. The half-dozen scored by the Rough Riders put the preseason goals against total at 13. But sure enough on the following Saturday, Stockade FC wiped the slate clean with a 3-0 shut out of the Rhode Island Reds in the NPSL home opener. It was the fourth time in three seasons Kingston has shut out Rhode Island, and the damage came quickly in the first half with many of the U.S. Open Cup participants being rested on a cold, rainy afternoon. They put the Cup game behind them and moved on in an obvious fashion. I like to point out how Rhode Island is called the Reds but they never wear that color during the game. They showed up in Kingston in bright yellow and blue kits, a lovely incongruity which, if you ask me, keeps this particular semipro branch of the beautiful game quite interesting.