Americans Ought to Be Insulted by New NFL Rule

A cynical move by Trump and NFL owners. 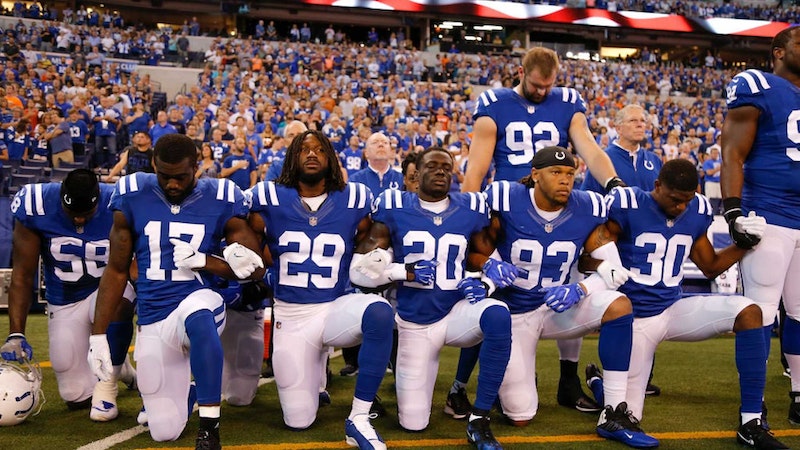 On Wednesday, the NFL decided free expression isn’t worth all the trouble. A little less than two years after Colin Kaepernick started kneeling during the national anthem to protest police violence against black Americans, all 32 NFL owners agreed to a policy that requires players and personnel to stand during the anthem. While players have the option to remain in the locker room, teams will be fined if anyone kneels on the field.

This is a mistake, and Americans should take it as an insult. It’s worth remembering that, while there’s substantial opposition to the protests, most Americans don’t think players should be fired for kneeling. And they generally didn’t support Trump’s obnoxious campaign to pressure owners into imposing severe punishments on players (a representative tweet: “If NFL fans refuse to go to games until players stop disrespecting our Flag & Country, you will see change take place fast. Fire or suspend!”)

However, despite the queasiness about firing players, an Ipsos / Reuters poll revealed that 58 percent of Americans still thought they should have to stand during the anthem. It’s no surprise that the NFL protests created so much controversy—beyond being centered on the ultra-inflammatory issue of race and law enforcement, they exposed the tension between two firmly-held values in the United States: nationalism and free speech. But one of these values should outweigh the other in this case.

I don’t think kneeling during the national anthem is a particularly effective form of protest. I agree with David Frum, who argued that there’s “no reason to resign the flag and the anthem to the president.” Trump wants to annex as much patriotic high ground as possible so he can look down upon his political opponents and shriek about how disloyal and disrespectful they are. But this isn’t an expression of genuine love of country—it’s a cynical ploy to divide and distract us.

The players may not consider kneeling to be an affront to the anthem or the flag, but that’s how it’s perceived by millions of Americans. Why needlessly alienate people? Why give Trump a weapon he’s sure to use in the most unscrupulous ways imaginable?

This is about much more than tactical messaging: it’s about maintaining the civic health of our country and affirming one of our most cherished principles. I can already hear the objections: “Oh, don’t be so dramatic. The NFL can sanction players all it wants. It’s not as if their First Amendment rights are being violated.” That’s not the point. I’m not making a legal argument. As consumers who watch NFL games and pay for merchandise, Americans have a powerful impact on the economic decisions owners make. We should think carefully about what we want that impact to be.

Just look at the NFL’s plummeting ratings—while other factors may account for that phenomenon, it’s bound to make owners wary of angering fans. Even if you think the players’ behavior was an egregious insult to the country, why would you want to silence them? Is your experience of the national anthem somehow diminished by a few players quietly kneeling on the field below? For a president who claims to regard “political correctness” as one of the intellectual and moral scourges of our time, isn’t it odd to treat certain forms of innocuous political expression as outrageous civic transgressions that must be prevented and punished? Plenty of people on the right know how to recognize intolerant, censorious attitudes among college students and other “social justice warriors,” but refuse to hold themselves to the same standard.

Again, you might argue that you’re free to boycott the NFL and urge owners to reprimand their players for taking a knee. Nobody’s disputing that. But you’re using your freedom to effectively limit someone else’s, and that’s not a precedent we should establish. It’s also important to remember that Trump led the push to get the NFL to capitulate, a fact that makes the owners’ decision even more disturbing. On Wednesday, Vice President Mike Pence had this to say on Twitter: “Today’s decision by the @NFL is a win for the fans, a win for @POTUS, and a win for America. Americans can once again come together around what unites us—our flag, our military, and our National Anthem. Thank you NFL. #ProudToStand.”

Pence’s message is incoherent. Were Americans somehow prevented from coming together around our flag, military, and national anthem before? Has anything really changed? Even if players don’t violate the new rule (and I’m sure many of them will), how would enforced silence unite us? We may not see as many protests, but the attitudes that led to them in the first place aren’t going anywhere.

On the day the new rule was announced, New York Jets CEO and chairman Christopher Johnson announced that he’ll personally pay any fines incurred by his players if they decide to kneel during the national anthem. Unlike his fellow owners, millions of irate fans, and Trump, Johnson understands that suppression and coercion won’t lead to unity.