The Battles of Muhammad Ali and Sonny Liston

The fights that determined their fates. 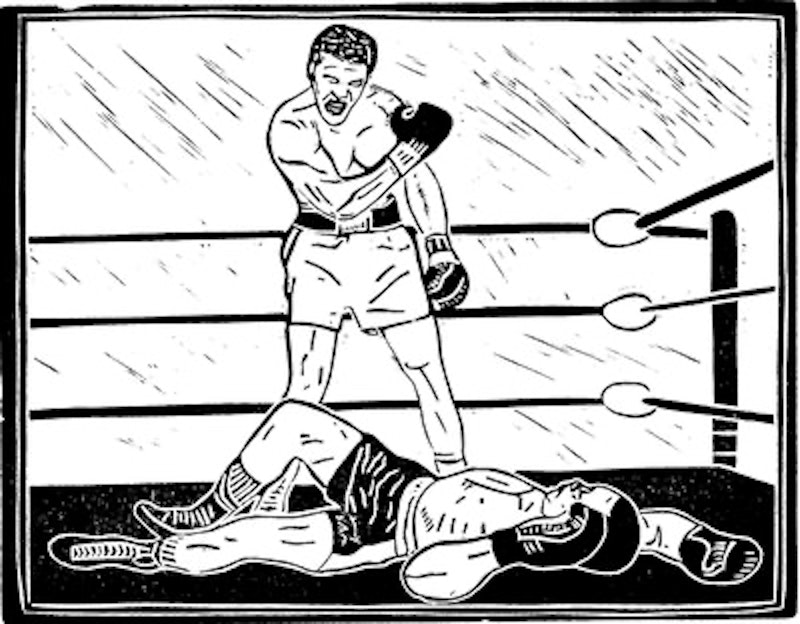 Before he became Muhammad Ali, Cassius Clay was an ambitious young boxer from Louisville, Kentucky. He won a boxing gold medal at the 1960 Summer Olympics in Rome and then quickly turned pro, winning his first 19 fights. The heavyweight champion of the day was Sonny Liston, a tough ex-con with a menacing reputation. In 1963, Liston agreed to a title defense against the young Clay.

Liston had a massive chest, huge shoulders and a thick neck. He overwhelmed opponents with a fierce left jab and a devastating hook. In 36 bouts he had 25 knockouts. He was known to knock out sparring partners and rip open sand-filled heavy bags with his punches. In his only defeat, Liston made it to the end of the fight despite suffering a broken jaw.

As a teenager, Liston was arrested for a series of assaults and armed robberies. He served time in the Missouri State Penitentiary where he learned to box. Upon his release in 1952 he turned pro, supplementing his fight income by working as an enforcer for the Philadelphia mob. In 1956, Liston assaulted a police officer earning him another six months in jail.

Liston earned the heavyweight title by twice defeating former champion Floyd Patterson. Despite his success, the public perceived him as a “monster.” African-Americans shunned him feeling Liston’s reputation hurt the civil rights movement.

Few believed Clay had a chance against Liston. In a pre-fight poll, 43 of 46 sportswriters picked Liston to win by knockout while bookmakers made Liston a 7-1 favorite. Liston was a traditional fighter with an 84-inch reach while Clay broke the basic rules of boxing fundamentals. Clay kept his hands too low and leaned away from punches instead of slipping them. He avoided punching the body and his hook and uppercut were considered average. Clay also had a “soft chin,” having been knocked down in two recent fights.

Prior to training, Clay consulted Eddie Machen, a former opponent of Liston. Machen told Clay the key to victory was to make Liston lose his temper. Clay undertook a public relations campaign to humiliate Liston. He interrupted Liston’s workouts and hurled insults at him. He showed up at Liston’s Denver home at two a.m. (the media was present) and taunted the champion from the street below. He called Liston “a big ugly bear” and told interviewers, “If you want to lose your money, then bet on Sonny.”

On February 25, 1964 at the official weigh-in the morning of the fight, Clay wore a denim jacket with the words “bear huntin’” on the back. He entered the room shouting, “Float like a butterfly, sting like a bee.” He screamed and lunged at Liston like a lunatic. Sportswriters thought Clay had lost his mind. But Clay’s trainer Angelo Dundee knew it was all an act. “Tough guys are afraid of guys that are a little goofy, guys that fly over the cuckoo’s nest,” Dundee said. “Tough guys don’t know where to go with that and Liston was a tough guy.”

By taking the initiative at the weigh-in, Clay neutralized Liston’s aura of intimidation. He took the fight to the bully. At the opening bell, Liston sprung forth like a bull, in attack mode. Clay danced, easily avoiding Liston’s wild punches. Halfway through Round 1, Liston landed a heavy right to Clay’s body. Clay used his elbows to block further punches and his foot speed to avoid Liston’s hooks. With 45 seconds left in the round, Clay hit Liston with several combinations and hooks to the face. By the end of the round, Clay proved he had the power and speed to frustrate Liston.

In Round 2, Liston landed a left hook, hurting Clay. Clay responded with a series of jabs, keeping Liston at bay. In Round 3, Clay took control. He hit Liston with a combination that opened a cut under Liston’s left eye. At one point Liston’s knees buckled and he nearly fell. Liston became enraged and unleashed hammer blows to Clay’s body and jaw. Clay held on to Liston’s shoulders and made it to the end of the round.

In Round 4, Clay danced around the ring, keeping his distance. He continued his jabs, re-opening the cut under Liston’s left eye. When the round ended, Clay was blinking his eyes furiously. He complained to Dundee that there was something burning in his eyes and he couldn’t see. “I didn’t know what was going on,” Dundee later said. Dundee put his pinkie in Clay’s eye then into his own eye.  “It burned like hell,” Dundee said.  “There was something caustic.”

Clay was convinced that Liston was using an illegal chemical on his gloves. He yelled at Dundee to stop the fight. “Cut the gloves off. I want to prove to the world there’s dirty work afoot,” Clay screamed. Dundee poured water in Clay’s eyes then told him, “Back up, baby. This is for the title. This is the big apple. What are you doing?” As the bell rang to start Round 5, Dundee gave Clay a one-word instruction. “Run!”

Clay later said he could only see a faint shadow of Liston for most of Round 5. He bobbed and weaved and did his best to avoid Liston’s punches. At one point Liston landed 16 consecutive blows to Clay’s body. Clay held out his left arm to keep Liston away while using his right glove to try to clear his eyes. Finally, Clay’s vision finally cleared. He began punching back and as the round ended Liston’s chance at victory had passed.

Some theorized that Liston intentionally had his corner man put an astringent on his gloves that Liston then rubbed in Clay’s face. Dundee believed that Liston’s trainer used Monsel’s solution on the cut beneath Liston’s eye. The ferric sulfate combined with Clay’s sweat then dripped into Clay’s eye.

As Round 6 began, Clay was clear-eyed and furious. He nailed Liston with a right to the jaw followed by a flurry of combinations. Liston tried to fight back, but his punches had lost their power. Clay regained control of the fight.

Between Rounds 6 and 7, Liston suddenly told his corner man, “That’s it.” He claimed he’d injured his shoulder and could no longer lift his arm. As the bell rang, Liston didn’t come out. Clay lifted his arms and celebrated. He’d beaten the invincible Sonny Liston and was now heavyweight champion. He began yelling at the reporters around the ring, “You were wrong and you were wrong. I’m the Greatest. I shook up the world!”

A team of doctors examined Liston after the fight and verified he’d suffered a torn tendon in his left shoulder. Though Liston had been promised $1.2 million for the fight he received only $13,000. The remainder was deducted by Liston’s organized crime associates as a so-called “mob tax.” Liston did not complain for fear of being killed.

The day after the fight, Clay announced he was a member of the Nation of Islam. A few weeks later, Nation leader Elijah Muhammad gave Clay a new name: Muhammad Ali. Muhammad meant “worthy of all praises” while Ali meant “most high.”

The fighters agreed to a rematch in late 1964. Liston trained hard, desperate to avenge the defeat. Three days before the fight, Ali needed emergency surgery for a hernia. The fight was delayed for six months. Liston became depressed and started drinking and smoking heavily. His training suffered and as the fight neared he was flabby and out of shape.

The rematch was controversial. Halfway through Round 1, Ali threw a quick right to Liston’s chin and Liston fell to the canvas. Liston attempted to get back up but was unable. Many in the crowd did not see the punch (it became know as “the phantom punch”). Fans began booing and yelling out “fix.” Ali stood over Liston yelling, “Get up and fight, sucker.” Chaos ensued as the referee and official timekeeper could not agree if Liston had remained down for a 10-count. Referee Jersey Joe Walcott stopped the bout and awarded Ali a first-round knockout.

Many couldn’t believe the punch could have knocked out a man like Liston. Announcer Don Dunphy said, “Here was a guy who was in prison and the guards beat him over the head with clubs and couldn’t knock him down.” Others like Tex Maule of Sports Illustrated called the punch legitimate writing “the blow had so much force it lifted Liston’s left foot… well off the canvas.”

Three months before the fight Malcolm X was murdered. Ali and Malcolm had been close friends and rumors persisted that Nation of Islam assassins were planning on shooting Ali during the fight. Liston feared they might miss and kill him instead.

Liston publicly denied taking a dive. But years later he told sportswriter Mark Kram “That guy [Ali] was crazy. I didn’t want anything to do with him. And the Muslims were coming. Who needed that? I went down. I wasn’t hit.”

After the rematch, the lives of the two fighters diverged. While Ali became a boxing legend, Liston slowly faded into obscurity. Liston continued fighting, but he was forever linked to mob ties and boxing corruption.

On January 5, 1971, Liston was found dead by his wife in his Las Vegas home. Heroin was found in the kitchen but no syringes or needles were discovered. After an investigation, Las Vegas police declared Liston’s death a heroin overdose. Knowing Liston was terrified of needles, some of his friends believed he’d been murdered by mobsters for failing to take a dive in his recent fight against Chuck Wepner. Liston was buried in a Las Vegas cemetery. His tombstone bears the epitaph: “A Man.”