The Angels’ John Lackey shows no grace as the Halos lose to the Red Sox again. 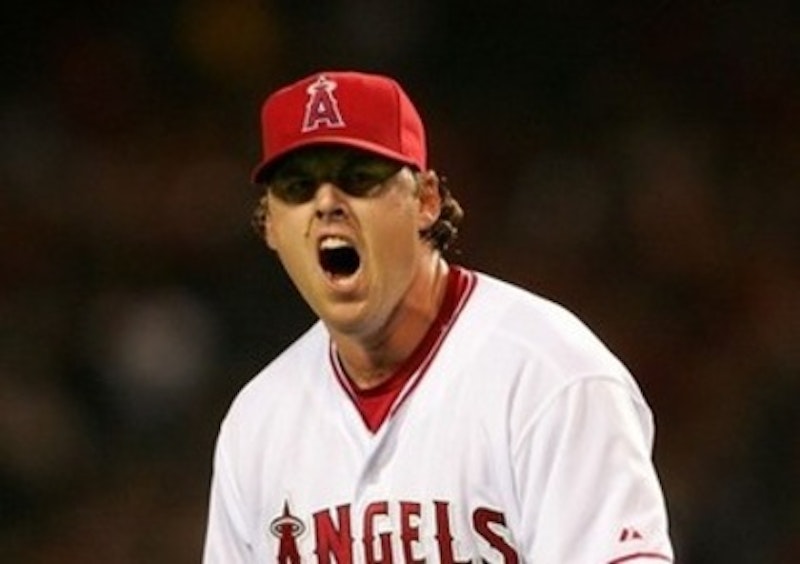 For baseball fans, October is a melancholy time of year even if your team is in the playoffs. In short order the season will be over and despite the entertainment of hot stove chatter and free agent signings, it’ll be a long winter. That said, after watching the Red Sox and Angels play two white-knuckle games on Sunday and Monday nights, I’m glad the ALCS doesn’t start until Friday. As a Sox booster, I need a breather. Hell, I’ll be able to watch tonight’s presidential “debate” without flipping back and forth between channels.

It was a minor miracle that Monday’s 3-2 clincher for the Sox, which threatened to go into extra innings for the second straight night until rookie Jed Lowrie drove in Jason Bay in the bottom of the ninth, finished before midnight. Before retiring, I laid out a Coco Crisp t-shirt in my younger son’s room—the season-long signal that our team won when he can’t stay up for the entire game—and didn’t even worry for the moment about the challenge ahead for Boston in playing the Rays for the American League pennant.

Very early this morning, I took a cursory glance at The Boston Globe’s coverage of the game and then moved on to reading about the far more vital, and disturbing, news of the global credit crunch. It wasn’t until about 11 a.m., checking out Craig Calcaterra’s blog that I found out what a complete jerk Angels’ star pitcher John Lackey is. (Calcaterra made no judgments, just alluded to Lackey’s bitterness.) Mind you, I like the Angels a lot: Mike Scioscia’s a gutsy manager, Chone Figgins and Vlad Guerrero are two of MLB’s most exciting players and their stadium in Anaheim is a terrific place to watch a ballgame. But Lackey really cheesed me off, as he spoke to anyone and everyone at The Los Angeles Times who’d listen, sort of like a bad drunk at a party who’s the last to leave.

He told Times beat writer Mike DiGiovanna: “We lost to a team that’s not better than us… Sunday night they scored three runs on a pop fly that was called a hit, which was a joke.” Hey, it wasn’t Jacoby Ellsbury’s fault that Torii Hunter or Howie Kendrick didn’t catch his ducksnort. Did Lackey expect Sox manager Terry Francona to tell the umps, “Hey, guys, let’s call a mulligan on that play, the Angels weren’t in position.”

More Lackey, a guy Leo Durocher or Ty Cobb would’ve loved: “Monday night they scored on a broken-bat ground ball and a fly ball that anywhere else in America is an out, and [Dustin Pedroia is] fist-pumping on second base like he did something great.” In fact, for the Sox it was great: Pedroia, who may win the AL’s MVP award, hit a double and a run scored. Is that so hard for Lackey to understand? In addition, the pitcher who won the seventh game of the ’02 Series (Lackey’s a cretin, but any team would like him in their rotation), visibly growled at a couple of plays when his infielders couldn’t come up with run-saving plays. Way to hang together as a team, John; as if Hunter, still one of the best outfielders in the Majors hasn’t saved your butt at times this season with his spectacular catches in center field.

Finally, let’s remember that the Angels racked up their 100 wins playing in the four-team A.L. West, where they had the pleasure of matching up with three sub-.500 teams, including the woeful Seattle Mariners. The Rays (97 wins) and Sox (95 wins) play in baseball’s toughest division, the A.L. East, where only the Orioles—and even that team was pretty good for half a year—were crummy in ’08.

I’ll admit that the Angels’ dominance over the Sox during the regular season, plus their injury-ridden roster (which mirrored the Angels last year in the playoffs), gave me little hope that they’d prevail against Lackey and his squad, but thanks to Jon Lester, Jason Bay, Ellsbury and Kevin Youkilis, plus great defense, they did. So, Lackey: hard cheese, tough guy.
Mid-season pick-up Mark Teixeira, gold-glove first baseman, slugger and current free agent, was better in minding his manners, saying “There were two really good teams in this series, and we didn’t catch many breaks. But we didn’t hit well with runners in scoring position, and that’s what it came down to.”

Since Sox third-baseman Mike Lowell is having hip surgery during the off-season, and is probably on the downward side of a fine career, the Red Sox would be nuts not to empty their vault and sign Teixeira to play first for them next year and slide Youkilis over to third. Boston GM Theo Epstein doesn’t need to bid for any pitchers, and with his payroll shed of Senior-Basher Manny Ramirez’s $20 million, obtaining a power hitter to bat cleanup is the most pressing need for the team. Teixeira would probably like playing at Fenway Park, where fly balls magically turn into doubles.