No Cinderella In Boston

Everyone thinks the Boston Celtics had a miracle turnaround, but the only thing miraculous about their championship was trading a bunch of eighth graders for All-Stars. 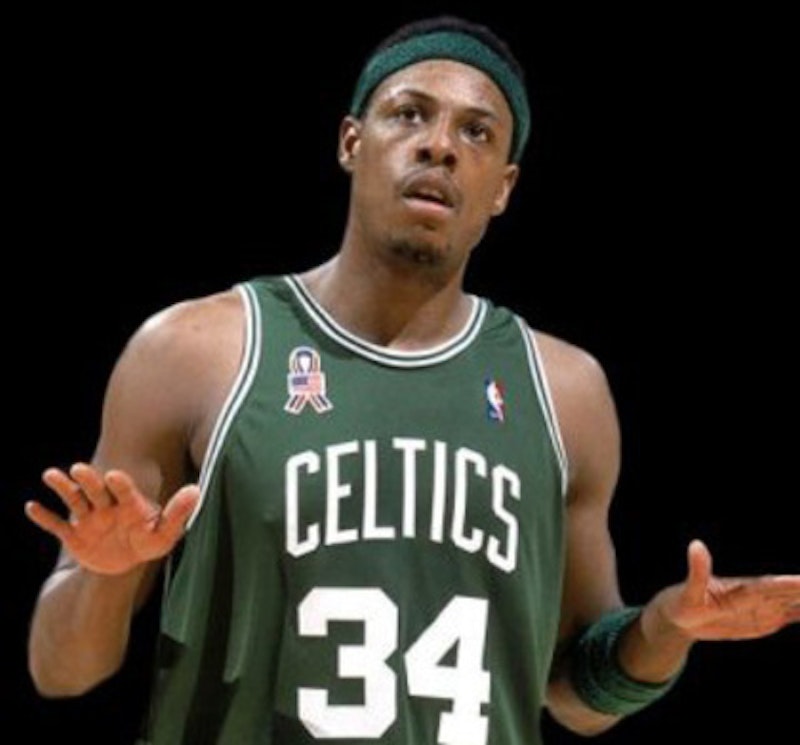 I make a solemn plea to sports analysts everywhere: Please stop referring to the 2007-08 Boston Celtics as the greatest turnaround in NBA history.

Or can we at least put an asterisk next to such a comment?

For those sports fans who were not aware (and I’m looking at you, people living in the Biodome), the Celtics won the 2008 NBA Championship, and in the process they won an impressive 66 games. During the 2006-07 season, however, the Celtics managed only 24 wins—but that’s pretty impressive considering the team consisted of Paul Pierce, some eighth graders and a couple of those old guys whom you see playing at the rec center with Horace Grant-style glasses and braces on both knees. I mean, sure, we all remember the huge splash they made in the free agent market when they signed Kevin Pittsnogle on July 26, but amazingly they turned right around and got rid of him on October 20.

The increase of 42 wins shattered the previous record of 32 games, set by the 1997-98 San Antonio Spurs. Some attribute that amazing feat by the Spurs to the addition of guard Reggie Geary, but I’ve stubbornly held that it had more to do with the drafting of this guy named Tim Duncan (coupled with a healthier David Robinson).

Well, what happened in Boston? Did Brian Scalabrine pull Larry Bird out of his ass? Not that I’m aware of. Did Doc Rivers learn how to coach? Definitely not. The Celtics were poised to get the number one pick in the 2007 NBA Draft and make Greg Oden the “Shaq” to Paul Pierce’s “Kobe.” But at the end of the Draft Lottery, Boston was shocked to find itself with the fifth pick, which was definitely the opposite of “wicked awesome.”  With Pierce growing more and more frustrated with the overall shittiness of the franchise, General Manager Danny Ainge decided it was time to resort to Plan B, entitled: “We Got the Fifth Pick? Holy Shit! What the Fuck Are We Going To Do Now?’

And so the Celtics executed a number of personnel moves (the most underrated of which was the signing of James Posey). Of course, the primary moves were a trade to acquire Ray Allen from the Seattle Supersonics and a trade to acquire Kevin Garnett from the Minnesota Timberwolves. In fact, out of 15 players on the Celtics 2007-08 roster, only six were on the team during the 2006-07 season. Boston went from a starting lineup of (then-rookie) Rajon Rondo, Wally Szczerbiak, Paul Pierce, Al Jefferson and Kendrick Perkins to a lineup of Rajon Rondo, Ray Allen, Paul Pierce, Kevin Garnett and Kendrick Perkins (not to mention a slew of better bench players). So, really the analysts are right: the Celtics experienced an incredible single season turnaround. Unfortunately, it was a turnaround of their roster.

Does this devalue the Celtics championship? Of course not. My frustration is merely with those people who tend to give credit where credit is not due. To most people, a “dramatic turnaround” is keeping relatively the same roster, drafting one (albeit incredible) player and winning 32 more games—it’s not adding two future Hall-of-Famers, completely changing your bench players and winning 42 more games.

Which brings me to Danny Ainge. We’re quick to forget that he was on the hot seat before this season. I’ll admit, Ainge deserves credit simply for pulling off these trades, but it’s time for everyone else to admit that he fell ass-backwards into this scenario: he is not some sort of GM genius. First of all, he was extremely lucky that there were two teams out there that were in full rebuilding mode and were very eager to unload their respective superstars. People are acting like somehow this was Ainge’s plan all along: stockpile young players and eventually trade them for superstars. In what way is that a reliable strategy? In actuality, Ainge was planning on drafting Greg Oden or Kevin Durant and hoping that either one would form a nice core with Pierce and Al Jefferson. When they wound up with the fifth pick in the Draft, Ainge was forced to say “fuck it” and trade the team away or risk being fired halfway through the season.

This probably makes me seem bitter about the Celtics’ success; however, although I wouldn’t say that I was rooting for them in the Finals, I definitely was not upset about them winning. There are three reasons for this mindset: 1) My hatred of Kobe, Phil Jackson and the Lakers reigns supreme; 2) The result of the Finals made my team, the Cleveland Cavaliers, look pretty damn good considering we almost defeated Boston with nothing more than Lebron James and some cardboard cut-outs of basketball players; and 3) I’m kind of excited (make that downright giddy) about the prospect of the Celtics following the exact same path of the Miami Heat. Much like the Heat, the Celtics mortgaged their future to win a championship right now. There’s nothing wrong with that, but Boston fans need to be prepared for the repercussions. By my math, Ray Allen will be 98 at the start of next season, and he showed significant signs of slowing down throughout the playoffs. Additionally, Kevin Garnett proved to the world that he is content with taking 18-foot jumpers every time down the floor and that he really doesn’t feel compelled to take over a game on most nights, even though he is talented enough to do so.

I congratulate the Boston Celtics on their NBA Championship, but can we please stop talking about this like it’s a rag-tag, Walt Disney, underdog sports tale, reminiscent of Tiny Giants?