A Defense of Red Sox Nation

Boston’s team has an enormous number of bandwagon jumpers, but they’ll disappear when the team goes sour. Meanwhile, you can’t blame people for filling other stadiums rather than paying scalpers enormous sums to get a seat at Fenway Park. 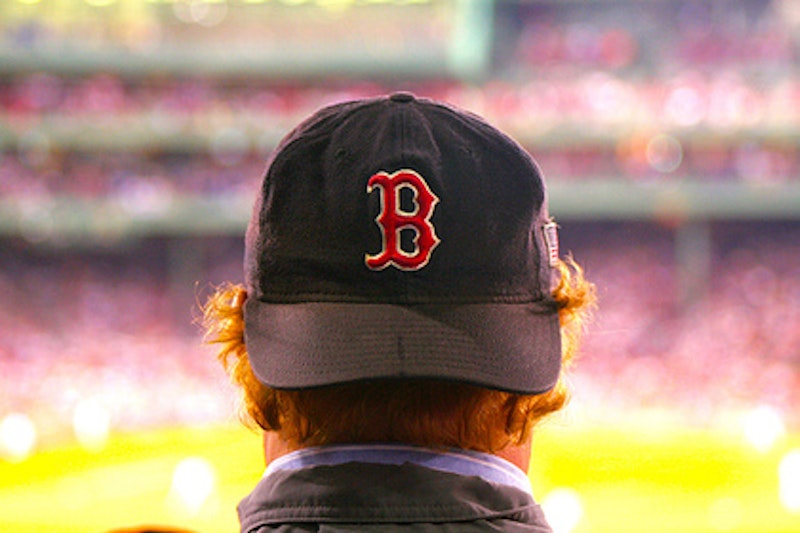 One Saturday morning earlier this month I was running an errand at the Barnes & Noble in the guts of Baltimore’s Inner Harbor outdoor/indoor mall and though it was drizzling the streets and retail outlets were packed with baseball fans, the majority of whom were wearing Boston Red Sox t-shirts or caps. The Sox were in town for a four-game series at Camden Yards against the Orioles and, as has been the custom since 2004 on such occasions, you couldn’t walk 10 feet without hearing snippets of conversation from New Englanders on a short jaunt south, nattering about the pros and cons of area hotels, the cheaper prices in Baltimore and what an awful shortstop the reigning world champs have in Julio Lugo.

This was all fine by me: as a devoted Sox partisan I greatly enjoyed engaging the visitors, who, by and large, were exceedingly polite and revved up for the games, although some were perplexed by the dichotomy of my older son wearing a classic O’s hat with the cartoon bird and his younger brother sporting a red Coco Crisp shirt. Frankly, Sox fans are on better behavior when they swarm the cities of opposing teams than at Boston’s Fenway Park, where you can get your head bitten off for the slightest infraction.

What’s different this season is that the Orioles faithful—put to a test worthy of Hercules since the team’s last winning season in ‘97—have, mostly, accepted that when Boston comes to town their Camden Yards is transformed into, as the local sportswriters say, “Fenway South.” Mind you, O’s owner Peter Angelos has never publicly complained about this spectacle—if you’re at a concession stand during the game and the crowd roars, it’s impossible to tell what team has scored—since he obviously prefers a sold-out stadium instead of 12,000 people showing up for a game against even strong teams like the Minnesota Twins.

Yet in a wholly unexpected twist, the rebuilding O’s, dismissed by almost everyone as a last-place team in April, have a winning record and are a real factor in the A.L. East division race, just seven games out of first place as of this writing. I watch a lot of O’s games on television and a month ago it was really irritating to hear MASN broadcaster Gary Thorne repeat the mantra after another come-from-behind win by the seemingly rag-tag, no-name club, “This team never quits.” Yet, although it’s escaped the mainstream sports media (on the June 22 Baseball Tonight, the O’s-Brewers game wasn’t even included in the hour-long wrap-up), I’ve come to realize it’s true. Almost no lead, as the Houston Astros found out last week, is safe against the Birds. The Tampa Bay Rays are hogging all the “Cinderella team” commentary in 2008, with good reason since that historically wretched franchise is now a very legitimate contender for the postseason, but I’d bet that when September comes the Orioles will have overtaken the young Rays in the standings.

O’s manager Dave Trembley isn’t the flashiest guy in town, but I’d agree with The Sun’s Rick Maese that at least so far he has to be considered for Manager of the Year in the American League. Maese says, “[I]f you told me in the spring that the Orioles would above .500 in June, I’d have immediately ordered whatever filled your glass. Would’ve made it a double even.” Ever heard of relievers Jim Johnson and Matt Albers? Maybe not, but I’d sure like to have them in the Sox pen, letting veteran Mike Timlin retire with some dignity and not suffer any more immediate meltdowns on the mound.

Winning ballgames is a balm for fans, and maybe that’s why people in Baltimore just shrug now when the bandwagon jumpers and pink-hatted ladies who comprise “Red Sox Nation” come to town. (It also helps that attendance, suddenly, is surging.) So what’s the excuse for the spate of baseball columnists—exacerbated during inter-league play—who are apparently just realizing that the Sox, finally shorn of the “lovable chokers” label that the New England intelligentsia reveled in romanticizing for so many years, are, at least temporarily, a draw in whatever city they play? A week ago, The Philadelphia Inquirer’s Bob Ford ranted about the interlopers who came to see the Sox play the Phillies in a three-game series at Citizens Bank Park, lamenting that the “casual fans who [want] to glom on the gravy train” were wreaking havoc in his city.

He wrote: “Once, there was something appealing about the passion that that Boston fans brought to the team that had broken their hearts on such a regular basis… The team offered a counterbalance to the corporate machine of the New York Yankees.” Hey, Bob, stick it up your ass. As a Sox fan since the mid-60s when I was a squirt, there was nothing “appealing” about losing the World Series in ’67, ’75 and, especially, in ’86. It sucked. When the Yanks’ Aaron Boone took Tim Wakefield deep in the seventh game of the ALCS in 2003, I simply turned off the tube and went to bed, hardly surprised and certainly not “heartbroken.” One of my nephews, who grew up not far from Fenway and went to Boston College, was devastated after the ’03 loss, which makes sense since he was a toddler when Bucky Dent became a household name in New England in 1978. I didn’t share his pain, and I doubt anyone who remembers Frank Malzone did either.

Anyway, Ford continued on about the “cloying, self-important, pompous, overly loud” Red Sox Nation (an admittedly annoying term, although you can’t blame the current owners and marketing team for trying to squeeze out every last nickel they can), who have the audacity to root for Manny Ramirez instead of Ryan Howard. “There’s nothing cuddly or cute about a team with a $133 million payroll. You can’t be an underdog if you spend like the Kennedys. [T]he Red Sox… who were once a cold-water walk-up on Kenmore Square, they are now a gated compound on the Cape.” Now, the Yanks, New York Mets and Detroit Tigers all have a higher payroll than the Sox, but since none of those teams have been well-acquainted with first place this season, I guess Ford gives them a pass. And by the way, the Phils’ payroll is also over $100 million.

Never mind that Phillies’ fans are the worst I’ve encountered—a family trip to Citizens Bank two years ago was marred by a drunk, his young daughter seated next to him, screaming obscenities at me for standing up when David Ortiz hit a double—since when is it unseemly for an owner to actually spend money and increase his team’s chances of winning?

The Cards came to Boston this past weekend (and took two of three from the Sox), and it was an opportunity for Bernie Miklasz, of The St. Louis Post-Dispatch, to dump on fans of every single Boston franchise, chucking in some mild Irish slurs while he was at it. He said, “At first it was kind of cute. When the Boston Red Sox won the 2004 World Series at Busch Stadium, I was happy for their fans. Boston is a passionate and traditional baseball town, and Red Sox Nation endured considerable angst throughout the decades…” Bernie’s no longer amused, teeing off not only on Sox fans, but those of the Patriots and Celtics. “Hey, Sully—I didn’t see you kick the field goal. That was Vinatieri. So quit rolling around in the end zone. Yo, Murph, yeah you in the Bird Jersey, bum-rushing the floor at the [Boston] Garden on Tuesday night when the Celtics destroyed the Lakers to win the NBA championship. Yeah, you. That’s right. You aren’t even Eddie Bird (Larry’s brother), so get off the basketball court and let the Celtics players celebrate. They should rename Boston’s ‘Big Dig’ and call it ‘Dig Me’.”

Enough, fellas. Although personally I’d like nothing better than for the Sox to build a dynasty to rival that of the Yanks in the 50s or late-90s—and what fan of any team wouldn’t?—it’s not likely. Odds are that Red Sox Nation will have another couple of years as a sports economic powerhouse and then another team will capture the public’s imagination. And when that happens, I’m looking forward to when the likes of Ford and Miklasz whine about the Orioles’ juggernaut called “Birdland” from coast to coast