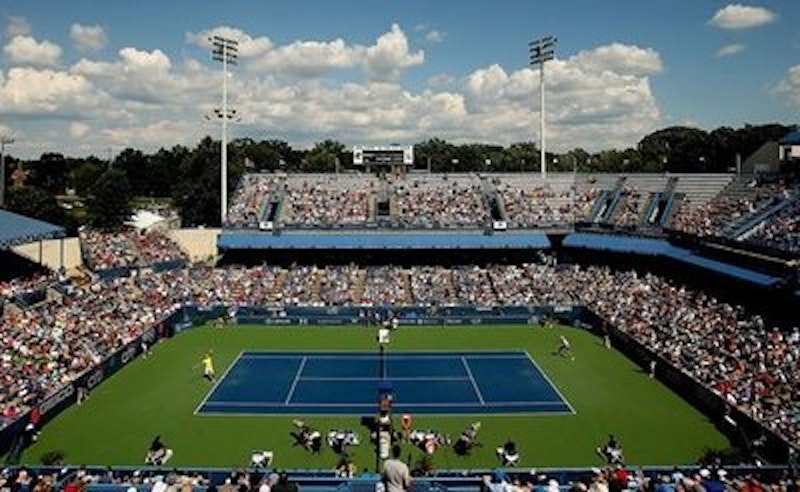 Most fans of professional tennis probably don’t watch much of it live, unless you happen to have a jet. Tennis is not like baseball, where if you happen to live within driving distance from one of the many Major League (or even minor league) ballparks—as millions of Americans do—you could potentially see dozens of games every season.

Many pro tennis fans would consider themselves lucky to attend a grand total of two ATP tournaments a year. As a fan myself, I'm lucky to live in Richmond, where I can drive every sweltering summer to see the world-class CITI Open ATP tennis tournament in Washington D.C. You take what you can get, and in this case I get a lot, even if it's for a few short days.

This year, I attended the CITI from day two of the tournament through the final on Sunday, logging approximately 57 hours on the grounds of D.C.'s Rock Creek Park Tennis Center from August 4-9. I was fortunate to have access to the event's media tent, an air-conditioned oasis stocked with a refrigerator full of cold drinks. It took me seven bottled waters, two Red Bulls and a 16 oz. Pepsi to stay hydrated on the first day—95 degrees—at the tournament, so that refrigerator was a big deal.

You need a plan at a tennis tournament. It's not like going to a baseball game. All you have to do at the ballpark is find your seat and decide what kind of beer to drink. Go for at least one day at the very beginning of the tourney, when you often have five matches taking place simultaneously, from around noon to 10 p.m. Casual fans want to attend the final, where they'll see a couple of "big name" players compete. The hardcore fan, on the other hand, wants to see as many matches, and players, as possible. Ten straight hours of tennis is what the tennis maniac craves, and the action is down in the trenches, on the side-courts.

My routine was to walk around and catch a bit of each of those five simultaneous matches before settling in for the one that looked most compelling. This way I could catch players who I like to watch (or have always wanted to watch), while also discovering new players I didn't know much about. This year's discoveries: hard-serving, affable (like all Aussies) Sam Groth, rising American star Steve Johnson (who narrowly lost in the semi-finals) and the extremely talented 18-year-old German, Alexander Zverev, who I expect to win a major championship by the time he’s 23.

Early in the week, I avoided the Stadium Court, where you’re more likely to see a very highly-ranked player routinely take apart an unseeded player, in the early rounds at least. Mind you, this approach is hardly ironclad. This year the number one seed—and marquee name—Andy Murray lost in the Stadium to the unknown Russian, Teymuraz Gabashvili, in his first match of the tournament. Still, you'll generally find more competitive matches on the less glamorous outer courts early on, plus you'll probably get a better seat as well.

It's always good to set aside some time to stroll around the tournament grounds, just observing.  I saw Andy Murray playing a practice set with world number 13, Richard Gasquet, along with six other fans. On another practice court, I caught Tennis Channel announcer Justin Gimelstob giving service return tips to 6' 10" American John Isner, who’d eventually go all the way to the finals before losing to world number five, Kei Nishikori.

Aimlessly walking around the grounds of a tennis tournament, you'll also run into many of the players. They may be on their way to the training room, or heading to the players' lounge, or even watching a match, but they're all over. You won't get this opportunity to check out the players in their natural habitat at a baseball or football game.

The first thing you'll notice is how healthy all the players look. Sleek and muscle-toned, the pro player is the product of a strict training regimen and state-of-the-art diet. While you'll see the occasional baseball player with a gut; not so in tennis. In a sport where an athlete must survive at least six days of very physical competition, with little recovery time and often in extreme heat, in order to win a tournament, only the fittest survive.

Having followed my tournament plan for five days, I felt rewarded enough as a fan that even if I hadn't stayed for the final, the experience would’ve been complete. But I did stay, and saw a tight, three-set final where 5' 10" Kei Nishikori—Japan's great hope—slay the giant, John Isner. The best 57 hours I've spent in a long time.