So it’s not the Masters. Miniature golf—for those who still slow down enough to play the game—has a unique, if disappearing, appeal. 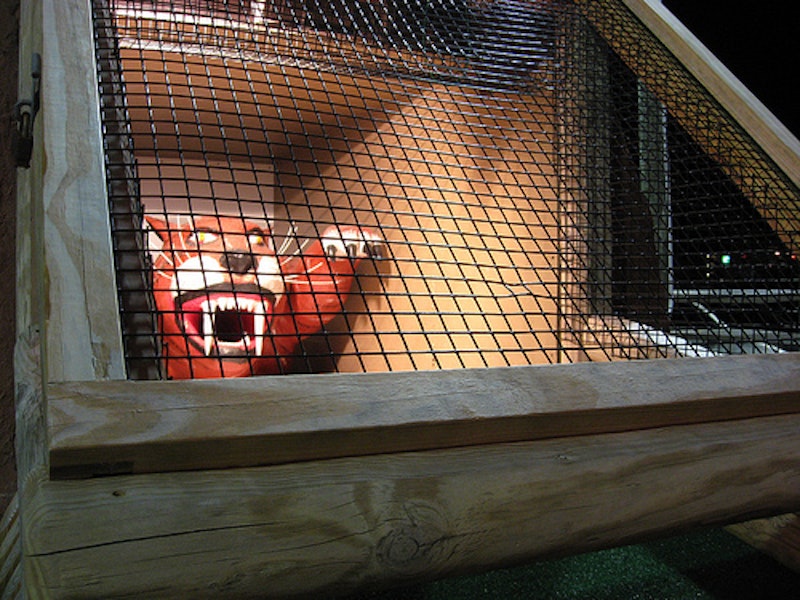 Laugh if you will, but I derive a not inconsiderable amount of pleasure for a skill at what one of my four brothers mocks as “the minor, if amusing, trivial sports,” specifically miniature golf, croquet and bocce. Sure, I was a pretty fair baseball player as a youth—decent bat, good glove, an absolute donkey on the base paths—and not bad at touch football, but bombed out at basketball, soccer, lacrosse and hockey, and as for tennis, well, I never had the patience to even get started. Never been skiing either, probably because as a youth that was frowned upon as a “rich kid’s” indulgence which carried baggage; as an adult I hate cold weather and don’t feel like breaking any bones. In addition, I’m a so-so swimmer, and can’t recall if I’ve ever jumped off a springboard. Pathetic. While two of my brothers earned university scholarships for their athletic prowess in high school, along with top-notch grades, I tried out for the LAX team at Huntington High School and was cut after the first day. Suited me fine, since I reckoned there were far better ways to spend my time, but my parents were distraught that my college applications would have a large he-man blemish, and it took several days to calm my mother down over this failure.

Nonetheless, at mini-golf I’ll gladly take on all comers. Obviously, it’s all in the mastery of putting—not unlike croquet, where the utmost concentration is required when you’re caught between two opponents at a back-end wicket—and that’s a talent, such as it is, that I learned as a squirt. One of the older boys in my family had a summer job at a mini-golf course in Northport on Rt. 25-A—this was 1961 when I was six years old—and a couple of times a week he’d take me along for company. Since it was in the early evening and the owner wasn’t there, I had the run of the traditional 18-hole course, decorated with windmills, ponds, gingerbread houses, funnels and other obstacles that took a lot of cunning to figure out. It’s said, and there’s no reason to doubt it, that golf—real golf, that is—is a matter of lifelong practice, and while I never had the time to develop a strong drive, at mini-golf I played that Northport course over and over and over, and emerged as an ace.

Mini-golf isn’t really of modern times, yet another pastime that’s been superseded by speedier pursuits, whether inside or outdoors, and it’s likely that most Americans under the age of 25 (at least those who live in urban areas; I can’t speak for the states that time’s forgotten, such as Ohio, Missouri, New Hampshire and Wisconsin, no condescension intended) won’t experience the thrill of sinking a ball on one stroke at the 18th hole, which usually wins the participant a free game and, more importantly, a fleeting moment of glory. As it happened, I took this hobby somewhat seriously and played a lot as a teenager, sometimes on group dates, sometimes hanging out with my hippie buddies, or just by myself, strictly for grins.

On one occasion, while spending time in Europe as a 20-year-old Mr. Nanny for my niece and nephew, the five of us played a meticulous mini-golf course at the Tivoli Gardens in Copenhagen. After 14 holes, I was creaming my oldest brother—whose competitive streak is daunting—and we took a brief break. My sister-in-law, mindful that dinner afterwards could be a grumpy affair if her husband was defeated, pleaded with me to throw the game. Zounds! I didn’t care what dark cloud was on the horizon, there was no way I’d take one for the team. As it turned out, the interruption screwed up my timing and I wound up losing by a stroke—choked!—a bitter turn of events that’s still brought up at family reunions.

In the mid-80s, as co-publisher of Baltimore’s City Paper I was invited for several years running to the Mayor’s annual celebrity mini-golf tournament, held each June outside of City Hall. Now, that was fun; most of my fellow “celebrities”—local television clods, City Council members, gossip columnists for the city’s then-three daily newspapers, advertising agency directors and so on—were real duffers and showed up for the schmoozefest, which seemed redundant to me, since in Baltimore, like all cities, professional glad-handers are always on duty, traipsing to this or that charity event, opening of a new boutique or hotel, and all sorts of other absolutely horrid events which were ripe, if that’s your shtick, for getting your picture taken.

Yet there was one fellow, a tough-as-toenails City Councilman named Mike Curran who took this tournament very seriously, as did I. He was rather amiable once you’d established a relationship and we’d lay down a gentleman’s wager each year on the outcome. I won the trophy two years in a row, ’86 and ’87, and a City Paper photographer was there to record the magic; Mike took home the made-in-China-for-a-nickel prize the two previous years. What was great about this one day was that any reporter/politician squabble that may have been brewing was forgotten; it was all about the game. Two days later, Mike or one of his colleagues might call the office to call me a low-down rat over a column I wrote about the City Council’s typical ineptitude, and that was fair enough.

Nearly five years ago, The Wall Street Journal’s Joseph Rago wrote a splendid column about—all true, I swear—that summer’s upcoming New York Championship Open, in which 50 touring professional mini-golfers competed for a measly purse of $1,000. (In stark contrast, Rago notes, to the maligned sport’s popularity in Europe, where in 2005 that continent’s world championship in Vienna attracted thousands of spectators and rewarded the winner with $100,000.) Rago also gives a capsule history of miniature golf in the United States, writing: “At the height of the 1920s, four million Americans played every day … Revelers wore furs and formal attire and wielded silver putters [on Manhattan rooftop courses] … More modest courses proliferated, and by the 1950s there were as many as 50,000 across the nation, eventually giving rise to the classic Americana of windmills and whales.” Rago, a Journal summer intern at the time, is now a top-drawer editorial writer at the daily, concentrating on ObamaCare, a task that earned him, for better or worse, a spot on The Daily Beast’s Top 25 Conservative Pundits.

It’s been four years since I last played, one Father’s Day at Mitchell’s Golf Course in Reisterstown, MD, and I sort of won. The sun was brutal, my sons were both duffers who took about 10 extra shots, pissing off the party behind us, and so we knocked off in mid-game. But I still have the scorecard of that aborted contest, and although my eyesight has steadily declined, even with powerful glasses, this mini-golf champ can still sink a putt from a long distance. Not the stuff of superstars, admittedly, but I’ll take it.