Broadway Theaters Have Opened, But the Real Drama's at The U.S. Open in Queens 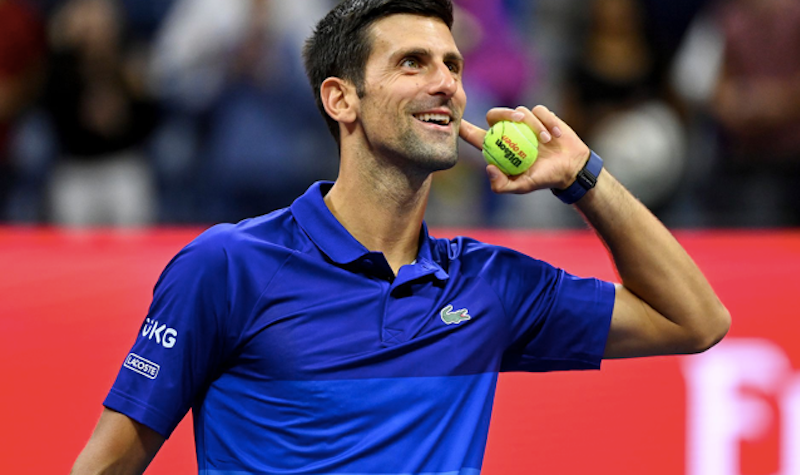 Novak Djokovic looked up into the stands, imploring, and put a hand to his ear after hitting an impressive down-the-line backhand winner against Kei Nishikori to save a break point in the third round of this year's U.S. Open tennis championship. The crowd's response to the needy gesture was tepid.

The wiry Serb with the most complete game tennis has ever seen, wants to be loved, as evidenced by his corny, post-victory routine of "throwing his heart" to the fans, via 90-degree turns, using both arms in an uplifting motion. To his embarrassment, Djokovic even went through this hokey charade at last year's fan-less U.S. Open.

The problem is that he's not always all that lovable. The guy wants to be Mr. Rogers, but is closer to Holden Caulfield. "Nole" whines, smashes his racquet, hits courtside personnel with tennis balls, holds renegade tennis tournaments that infect people with COVID, etc. He's the archetypal Eastern European—rough around the edges—while fan favorite Roger Federer, the Golden Boy of tennis with his elegance and polish, embodies Western European sophistication.

If Djokovic takes the tournament, he'll have completed the tennis Grand Slam by winning all four major tournaments in the same calendar year, which hasn't been done since Rod Laver in 1969. It would be one the most monumental victories in tennis history, but Djokovic knows that not having any crowd support for the entire tournament compounds an already arduous burden. You can be sure that if Federer or Rafael Nadal were in Flushing Meadows, Queens (both have withdrawn) for this tournament and attempting to complete the final leg of a Grand Slam, there's no way the fans would be cheering loudly for their opponents just for the cheap thrill of an early-round upset, as they did to Djokovic in his first-round win over the unknown Holger Rune. "Rune, Rune, Run," they chanted.

If Djokovic does find himself lifting the victor's trophy on Sunday, he'd have a solid claim on being the GOAT. In addition to the Grand Slam, he'd have 21 major titles under his belt, one more than both Federer and Nadal.

On the women's side, the sad drama surrounding Naomi Osaka continues to unfold. As I watched the defending champion and holder of four major titles melt down during her second-loss loss to 18-year-old Canadian Leylah Fernandez, ranked 74th in the world, I knew that the Japanese sensation was going to take another break from tennis—she'd already withdrawn from the French Open and Wimbledon this year to avoid the obligation to speak with the media after matches. In behavior reminiscent of Serena Williams when she lost to Osaka in the 2018 U.S. Open finals, Osaka threw her racquet down three times and walked off the court after losing the second set. In doing so, Osaka managed to do something that nobody could've previously imagined happening—she lost the New York crowd.

In a tearful post-match press conference Osaka announced that she didn't know when she was going to play again. She's become the Richie Rich of tennis. The game's given her all the money in the world, but she can't find happiness. Retiring might be the best choice at this point. Tennis seems to be causing Osaka serious mental health problems, and she doesn't need the money. A lucrative career in activism, à la Colin Kaepernick, is hers for the taking if she wants it, and it would suit her temperament.

On the men's side, the controversy at this year's tournament revolves around the matter of bathroom breaks. Greek star Stefanos Tsitsipas has taken flack for his lengthy toilet trips, but the rules don't set a time limit for them. Andy Murray, who lost to him at this year's U.S. Open, was perturbed that one of Zverev's breaks went on for eight minutes, going so far as to say he'd lost respect for the world number three. The irony is that the Scotsman had already revealed how he'd used a bathroom break, while facing Novak Djokovic in the 2012 U.S. Open finals, to give himself a stern lecture while looking in the mirror. Moreover, Murray had perceived the break as an attempt to throw him off his game, but Tsitsipas took the break after he'd won the set, suggesting that he was using it to settle himself, as Murray once did, not to "ice" Murray.

Players whining about "unwritten rules" being broken, like they do in baseball, is annoying. An easy, reasonable solution would be changing the rules so that every player gets a five-minute break after each set, which they can use as they wish.

With his four-set victory over Matteo Berrettini that extended into the early morning hours on Thursday, Novack Djokovic inched closer to completing the tennis equivalent of an MLB pitcher winning 30 games, which last happened with Denny McClain's 31-6 season in 1968 for the Detroit Tigers. The love, however, was still missing. He'd get more warmth there if he stopped doing things like getting disqualified, as he did at last year's tournament, for smacking a ball that hit a lineswoman in the throat.

In the match against Berrittini, when the after-midnight-at-the-U.S.-Open vibe had settled in, The Djoker got frustrated when fans kept yelling during his service motion. He hit one of Berrittini's service returns, which was called "out," in the direction of the chair umpire, saying, "get your act together.” The ball came close to hitting a ball boy.

Perhaps Djokovic has caught a break by having Alexander Zverev as his opponent in the semi-finals. The German star's facing accusations of domestic abuse after allegedly punching his girlfriend in the face at the Laver Cup in Geneva. It's doubtful that there will be a fan favorite for that matchup, which is at least better than what Djokovic's been experiencing so far. If he gets by Zverev, he can hope that fans at the championship match, given the circumstances,  give him the respect that the moment calls for. He's earned that much.