And the mysterious Kevin Correia. 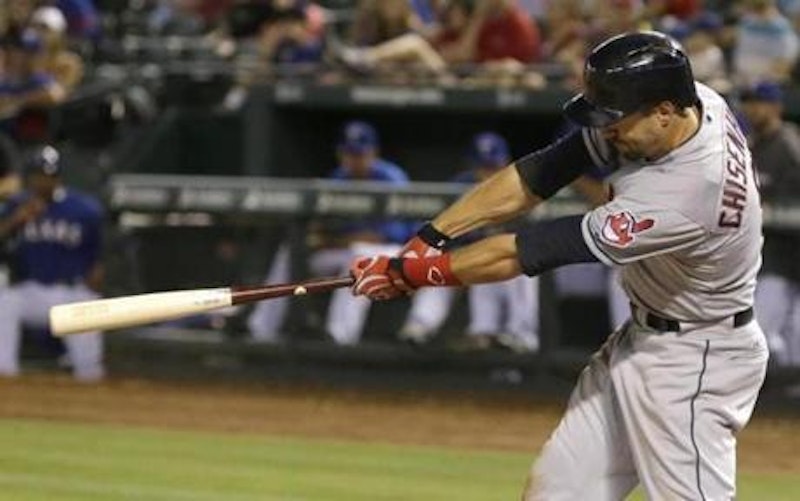 In Major League Baseball, 25 is the age at which you’ve either started establishing yourself in the majors, or you likely never will. There are exceptions, but the percentages are not in your favor if you haven’t reached some level of consistency by your mid-to-late 20s.

Lonnie Chisenhall turns 26 in October, but after two years of false starts in the majors with Cleveland, he’s changing the trajectory of his career. A former first round draft choice in 2008, Chisenhall struggled in the first few months of 2013. After a torrid spring training, young Lonnie found himself swinging and missing more often than not, going .213/.253/.351 through early May. Chisenhall was striking out nearly 25 percent of the time before being demoted. After a stint in AAA, he came back and posted decent numbers upon his recall in late June. However, August brought back the nightmares of April. A rocky road for the young man from Morehead City, North Carolina.

This year, Chisenhall has dropped his strikeout rate and is hitting line drives all over the field, leading to 16 doubles. There were signs in May that Chisenhall was turning into the hitter that Cleveland only saw brief glimpses of over the last few years, putting together a Miguel Cabrera-like slash line of .373/.430/.590.

On Monday night, the third baseman had a night that few major leaguers ever will. Five hits in five at-bats. Three home runs (lifting him from four to seven on the year), all pulled to right field. A double to the warning track in center. Nine runs batted in, pushing him to 32 on the season. I’m no baseball historian, but I’d imagine most full-time hitters haven’t knocked in more than one-fourth of the year’s RBI total on one night in June (60-plus games into the season).

The Mystery of Kevin Correia’s Longevity

The Twins’ Kevin Correia has made a remarkable career out of his less-than-intimidating stuff on the mound. Correia’s longevity is due to a combination of where he pitched (some of the league’s best pitcher’s parks in San Francisco, San Diego, and Pittsburgh), the fact that he’s remained healthy, that his contract was always attractive to low-payroll teams, and the deception on his 88 mph fastball. At 33, Correia has amassed 1317 innings over 11 seasons. And at 33, that career may be coming to an end. Correia was used mostly as a reliever early in his career in San Francisco. The Giants gave him a chance to start in 2008, and the results were disastrous: in 19 starts (25 total appearances), Correia finished with a horrendous 1.71 WHIP, an ERA of 6.15, and only 66 strikeouts to 47 walks. Amazingly, the Padres chose to sign Correia to a contract and he found himself with another chance in 2009. Correia’s extreme fly-ball tendencies were especially ineffective in 2008 when he pitched in hitters’ parks (Colorado, Cincinnati and Chicago). Maybe San Diego just wanted to poach a former Giant, or maybe they thought he could do reasonably well at spacious Petco Park (where home runs go to die). Petco certainly helped Correia, as he finished with a 3.68 home ERA and a 3.98 ERA overall. Correia found some new sink on his fastball and began to go deeper into games as ground-ball pitchers tend to do with the benefit of their best friend, the double-play ball.

At this point in Correia’s trajectory, you’d think, “Oh. He figured it out. That’s why he’s stayed in the majors for such a long time despite the lack of velocity or anything really noteworthy about his stuff.” And you’d be wrong. As is the case with low-strikeout pitchers, their performance is especially prone to fluctuation. Correia’s ERA and WHIP ballooned right back in 2010, finishing with a 5.40 ERA and a 1.49 WHIP in 145 innings. And yet, he got another contract. Low payroll teams kept calling on Correia. First it was the Padres, then it was the Pirates. Is Kevin Correia the nicest man in the majors? How was he managing to stay afloat despite these numbers? The ground ball and PNC Park are two key factors.

In 2011-12, Correia made 154 starts for the Pirates, compiling 325 innings, while striking out only 166. Correia’s sub-5.00 K/9 was consistently among the lowest in the majors among starters. As the K-rate declined, the ground-ball rate increased. It helped to have slick fielding infielders in Clint Barmes and Neil Walker behind him. Correia stayed healthy. The Pirates were mediocre enough that nobody seemed to mind the old groundball machine. You might expect that to be the end of the road. But then the Twins came in and offered Correia another two-year deal that kept their payroll down. The same Twins that entered 2014 with Mike Pelfrey in their starting rotation. At least the Twins could tell their fanbase that Ricky Nolasco and Phil Hughes had upside. I don’t know what they were claiming about Correia and Pelfrey. That they were good “clubhouse guys?” Or could they come right out and say, “We’re saving money. We know that Dozier, Buxton, and Sano are our future. Be patient with us again this year.”

Correia keeps on chugging, but it may finally be safe to say that the next ground ball he induces could be one of his last. Congratulations on surviving for as long as you did, Kevin. The odds were certainly not in your favor.