No one really knows what's happening out on that field. 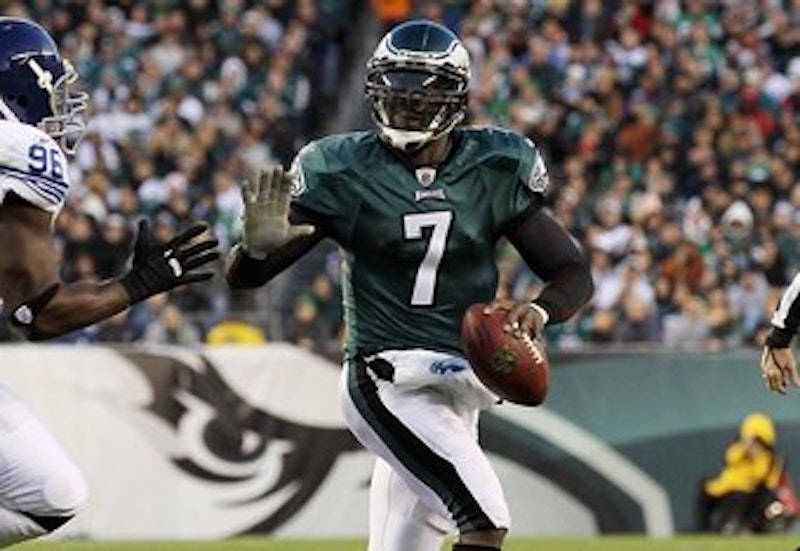 ESPN, USA Today, Sports Illustrated, Fox Sports, ProFootballTalk and every fan with a cursory interest in the NFL and a Wordpress site has them. Every Tuesday morning the weekly NFL Power Rankings pop up on sites around the web setting off days of hand-wringing and arguing over which teams were slighted or overrated. It’s all ridiculous.

The rankings change wildly from week to week because ultimately none of the teams are dominant and they just take turns beating each other. Case in point: the Eagles made a mockery of the Redskins on Monday night scoring 59 points and thus vaulting them to the top spot of the NFC power rankings. The airwaves were full of superlatives for Michael Vick after his single-handed dismantling of the 'Skins. Yesterday morning, I heard one ESPN analyst say that the Eagles are clearly the team to beat and maybe no defense can contain Vick. Right, or the Redskins might just be awful. The Eagles will face the Giants this Sunday in a battle for first place in the NFC East. The Giants had been the media darlings for the previous few weeks until they lost to the dreadful Cowboys. My guess is the Giants go to Philly and beat the Eagles resulting in a drastic shift in next week's power rankings and Trent Dilfer's head exploding on live TV.

The one thing that the NFL has over College Football is that a champion is ultimately determined on the field. For years, commentators have railed against the CFB rankings and the BCS system, and rightfully so. Determining a champion based on subject rankings and opinion is inane There's simply no need for NFL power rankings. They're nothing more than thoughtless filler. If you're wondering who are the best teams in the NFL you can just check the standings.

As much as I hate the Yankees snaring every free agent and handing out obscene contracts, at least I can count on them. There's something strangely comforting in the knowledge that even if my teams are out of the race (a near certainty) I can always root against the Yanks. The NFL has become a league of Davids with no Goliath. Apparently that formula is good for TV ratings but it certainly hasn't helped the on-field product. The NFL has about 10 teams with a real chance to win the Super Bowl each year, largely dependent upon the health of their quarterbacks. The rule changes over the years have resulted in a far too many video game scores like the Monday night game or the Denver/KC matchup on Sunday. Drives are extended by phantom pass interference calls. Offensive pass interference has apparently been removed from the rulebook. There are weekly controversies involving blown calls by officials that are validated by instant replay but still not corrected. Home teams routinely benefit from questionable officiating in close games. Everything the NFL does is geared towards producing more offense, in turn resulting in more interest from gamblers and fantasy football fans. In some cases the fantasy team has replaced the home team in terms of allegiance.

College Football has better rivalries, more passionate fans, better cheerleaders and marching bands, less mind numbing officiating controversies and in many ways is a better product than the NFL. Would you rather watch Auburn/Georgia and Penn State/Ohio State or Bills/Lions and 49ers/Rams? If the NCAA would adopt a playoff system College Football may be able to knock off the NFL for fan interest. But as long as the NCAA depends on power rankings like the BCS to determine a champion it will lag behind the new watered-down NFL.