Spreading the Blame for the Busted Dallas Cowboys

Poor management? Injuries? Bad draft? Or maybe they were never that great. 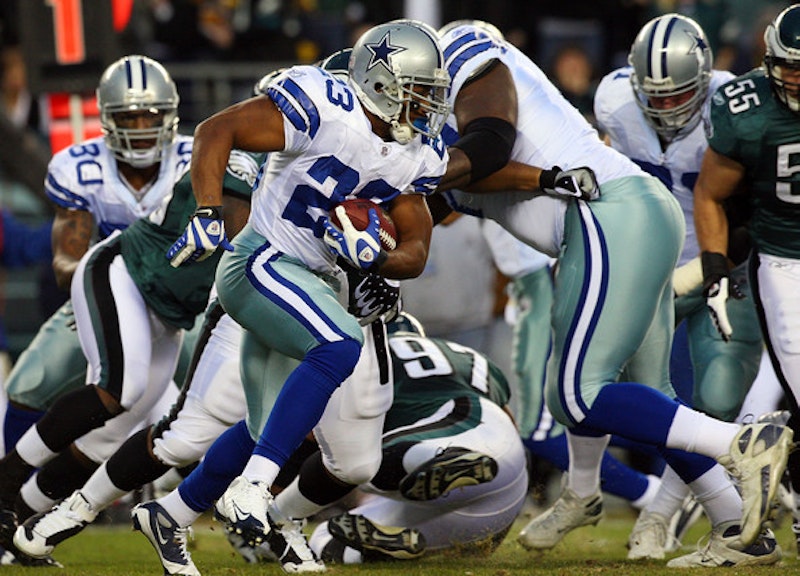 As the self-described “America's Team” has stumbled to a disastrous 1-7 start to the 2010 NFL season criticism has been heaped upon Dallas Cowboys owner/GM/Czar Jerry Jones. Much of it is warranted. Jones is a lightning rod. He craves the limelight and desperately wants credit for the success of his franchise. If you have any doubts about Jones' ambitions, read Boys Will Be Boys, Jeff Pearlman's riveting history of the cantankerous Jerry Jones/Jimmy Johnson marriage and divorce.

Entering this season the Cowboys were a chic pick to win the NFC championship and emerge as the first NFL team to host the Super Bowl, to be played in Cowboys Stadium this February. The team was coming off a 12-4 record in 2009, their first playoff win since 1997. With Tony Romo, Miles Austin, Jason Witten, a stable of running backs and young stud WR Dez Bryant, the Cowboys figured to be an offensive powerhouse. The defense would be lead by sackmaster DeMarcus Ware. Unfortunately for the Dallas faithful the 'Boys are 1-7, Romo is nursing an injured shoulder and Coach Wade Phillips was just tossed on his bum. The 2010 season has unraveled into a complete disaster and nearly everyone is pointing an accusatory finger at Jones.

Jones hasn’t been unjustly persecuted, but the same people who were saying the Cowboys were one of the NFL's most talented teams just two months ago are now flaming him for his personnel record as the Cowboys de facto general manager. Which is it? Is the team not as talented as perceived coming into the season? Is Jones to blame for not solidifying his roster during the offseason? Or is the team incredibly talented but vastly underachieving, with the blame falling upon the coaching staff? The NFL pundits can't have it both ways. If Jones is a terrible GM and a poor judge of talent how did the team win 12 games last year?

None of the talking heads or former players at ESPN, FOX, CBS, NBC, etc. want to dirty their hands with real analysis. I looked back at the Cowboys offseason moves and other than cutting Flozell Adams and trading for the Rams’ Alex Barron, the team pretty much stood pat. They drafted Bryant in the first round and he was expected to add another dynamic weapon to Romo's arsenal. Does replacing Adams with Alex Barron really result in a minus 11 swing in the won/lost column? The Cowboys were a good team last year, but not great. They were soundly defeated by the Vikings in the second round of the playoffs, did little in the offseason, and were then somehow declared Super Bowl favorites in August. That's some fuzzy math. It appears the NFL pundits fell victim to groupthink. No one wanted to pick the Saints to repeat because there's nothing compelling about naming the Super Bowl champ as your pre-season favorite. The Vikings looked like a looming disaster; leaving the Cowboys as the next team up. It’s a case of lazy forecasting coming back to haunt the people paid to offer their learned opinions.

Jones is certainly culpable in this mess, perhaps more for his handling of the coaching staff than his personnel moves. In retrospect it appears that making Jason Garrett the highest paid assistant in the league during the winter of 2008 to keep him from becoming head coach of the Ravens was a huge mistake. Phillips' hold on the coaching job has been under constant scrutiny since Garrett was retained creating an unnecessary melodrama around a team that never lacks for soap opera story lines. Ultimately the blame for the Cowboys’ dismal season falls on the undisciplined, underachieving millionaires on the field and Phillips and the coaching staff that failed to properly prepare and motivate them.