People get trampled and gored, sure, but that's no reason to stop the Running of the Bulls. 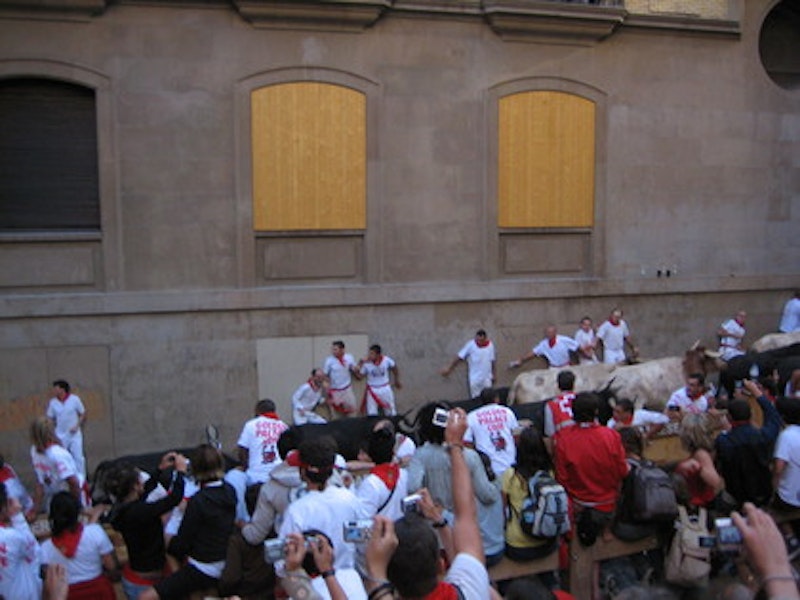 A hurried photo of the '06 event, taken by the author.

The summer after my junior year of college, my now-husband Dan and I spent three weeks traveling through Europe. Our luggage was packed too full and our foreign language skills were minimal, so we did what so many other young college students had done before us, traveling by train from one city to the next, wandering city streets in search of inexpensive local cuisine, sharing rooms with strangers, and at times drinking too much for our own good.

We started out in Spain, in a hostel in the center of Madrid. It was July and the city, more urban than we had expected, was a mess of construction. Dirt and debris were swept up in the hot breeze and stuck to our humid skin as we strolled through the streets surrounding Puerto del Sol. I purchased jewelry and hand-painted fans from street vendors—gifts for friends and family. We watched the World Cup Semifinals in a restaurant that offered complimentary plates of marinated olives instead of a basket of chips and mild salsa. During the day, we escaped the heat by roaming The Prado museum, or viewing Picasso’s “Guernica” at the Reina Sofia. At night we kicked back in crowded tapas bars, shared pitchers of sangria. We slept soundly, exhausted and slightly sunburned, and woke up one morning with a shared interest in taking an excursion to Pamplona, to see the running of the bulls.

Part of the San Fermín festival—a nine day fiesta made popular worldwide by Hemingway’s The Sun Also Rises—the running of the bulls is the sort of thing you see on the news and think to yourself “Who would be crazy enough to do this?” We wanted to find out. We took an overnight bus to Pamplona, dressed in the traditional attire of white clothing, red accents, and carrying only a passport pouch with enough Euros for food and the key to our hostel. The bus buzzed with excitement—men chattering back and forth in hurried Spanish and young Americans rubbing their hands together in nervous anticipation. I slept against Dan’s shoulder, waking up each hour to watch the dark country slip past my window. We arrived at six in the morning and the air was crisp and cold, like we had traveled from one season to the next, instead of a mere 300 miles north.

We followed the streaming throngs of soon-to-be runners from the bus station into town and I thought to myself, “I wonder if I’ll watch one of these men die today.” We came into a square littered with empty wine bottles and strewn garbage. The concrete was splotched with spilled red wine. Drunk men and women—all night partiers—were passed out in the grass or against colorful homes and storefronts, their white clothes as stained as the concrete beneath them. Across the square, groups of men lifted women onto their shoulders, or tossed them high into the air. Everywhere people were dancing, laughing, drinking, and stumbling all around us. And then suddenly, the crowd surged as one, heading down the narrow streets of Pamplona to gather alongside the corral and prepare to watch the bulls.

Dan and I pushed as far forward as possible and climbed up onto stone ledges to get a better look; but the crowd was massive, everyone standing on tip toe, cameras in the air. The corral was separated into two parts: the street, where countless men waited for the bulls to come charging and an empty pen where they could dive to safety while running for their lives. In an instant, the running started. And in an instant it was over, the bulls streamed past us and down the road, terrified men pressed their backs against the stone walls of surrounding buildings, exhaling with relief. Minutes later, an ambulance arrived in the road in front of us to care for a man who had been gored—a man, we would learn later, from Ohio.

As I write this, it is day three of this year’s festival. So far, 20 runners have been injured, two of whom were gored, one of them a 22-year-old from California. I don’t know what happened to the Ohioan that I watched receive medical attention back in 2006. Presumably nothing. He is likely just one of hundreds of men who suffered injury, but now have amazing stories to tell. Or maybe he is one of the 15 who have died since 1924.

I’m not going to advocate that the running of the bulls should be stopped because it is too dangerous. People do all sorts things that I myself would never have the guts to do. A race where men greatly outnumber bulls seems no more dangerous to me than cliff jumping or skydiving. I spend enough time worrying that any airplane I’m on will plummet to the ground to ever think of voluntarily throwing myself out of one. And the thought of leaping from a rocky precipice into unknown waters below seems just as ill advised as running over cobblestone streets to escape a charging beast. Nor do I necessarily agree with the notion that the harm inflicted upon the animals necessitates an end to this historic tradition. Indeed the bulls are stabbed and prodded with spikes to increase their aggression before the run and the bullfights that follow each run undoubtedly end in the death of an animal. But there is something to be said for historically and anthropologically intriguing cultural traditions. They provide continued richness and rarity in a world where globalization and increased technological communication have forced a sort of cultural regression toward the mean.

Attending the running of the bulls was one of the most electrifying and memorable experiences of my life. I didn’t run and I never would. Dan wore sandals as a purposeful deterrent from participating, and I’d force him to do the same in the future. But I can see why so many people flock to Pamplona each year to be a part of the event. There are certain experiences you have in life, certain moments that you look back on and think, “I can’t believe I actually did that.” Just being there was one of those moments for me, even if it only lasted an instant.