Finley to Steinbrenner to Cuban

The passing of George Steinbrener ends an eccentric era of baseball, and he'll likely be more popular in death than life. 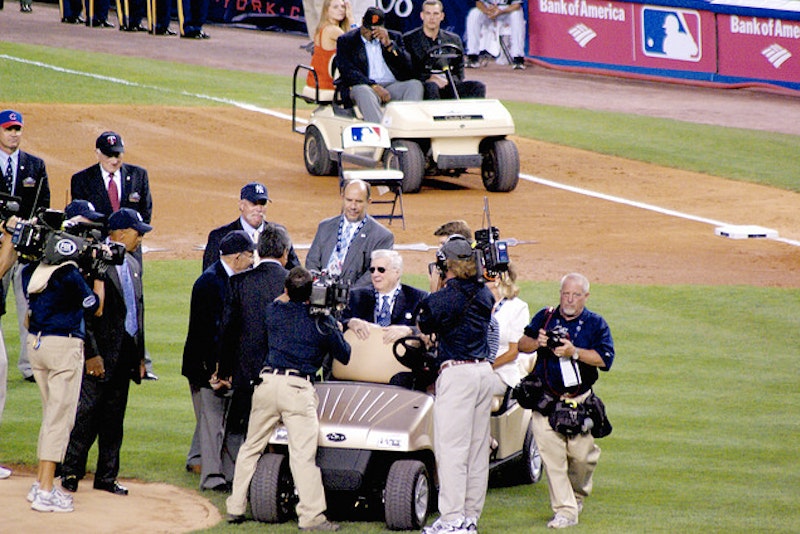 I was waiting on line at a Baltimore County hospital’s coffee kiosk mid-morning on July 13, trying to zone out the incessant nattering of a brassy woman who complained there was no “view” at the nearby tables, when one of the attendants said to her colleague, “Hey, George Steinbrenner just died from a massive heart attack.” This wasn’t newsworthy to the other worker—she simply replied, “Who gives a shit, I don’t like baseball anyway”—but as I was isolated from anything other than the small hospital world (no iPhone) this gave me a brief start. I say “brief,” because after about 15 seconds of contemplation, I recalled that the once larger-than-life Steinbrenner (sort of like the Donald Trump of baseball) had been rendered incoherent for several years now, and, after all, he was 80. That’s a fairly good run for a man of his generation, and he exited at one of the last stops of the one-way train we’re all riding.

As a Red Sox fan, it’s not surprising that the Yankees are my least favorite MLB team, but I’ve always enjoyed Steinbrenner’s free-spending, blustery feuds with the media and his insatiable need to fire, re-hire and fire once more the parade of managers in his employ. I can remember eagerly picking up the New York Post in the late 1970s, since George, Reggie Jackson and Billy Martin were invariably on the back page with some nasty headline to draw the reader in. Steinbrenner ran a very successful soap opera, and though his franchise went through a blessedly long streak of missing the World Series from ’82-’95, his operation was always entertaining. Really, who couldn’t bust a gut when George would talk of “Yankees class,” when the team, with the exception of Lou Gehrig and maybe one or two other players, has historically emitted the whiff of greed, crass behavior and grown-up bullies. The guy could’ve had a rewarding third career as Jackie Mason’s sidekick.

It’s because of Steinbrenner, of course, that Mark Cuban, the loudmouth owner of NBA’s Dallas Mavericks, will never get anywhere in his attempt to buy a baseball team. He’s too threatening to the status quo of MLB commissioner Bud Selig, and would upset his calm and sterile regime. Which is why it’s nuts that Cuban, who was rebuffed in his bid to take over the Cubs and will be flipped the bird from other owners (terrified of Selig, one of life’s minuscule mysteries) in his rumored, but not official, effort to take over the bankrupt Texas Rangers.

Cuban would be this era’s Steinbrenner, with a twist: like the old man, he’d spend a lot of his money on star players and provide constant fodder for the media, but he’d also be a presence in the clubhouse, the ballpark stands and let everyone know his opinion of this or that athlete on his blog or Twitter account.

Once my medical procedure was completed and I returned to the connected world, I read a comment thread following one of the 899-and-counting stories about Steinbrenner and was taken aback by how many people called the Yanks’ owner’s death a “tragedy.” Please: the man was 80 and led a full and fascinating life. When Yankee catcher Thurman Munson was killed in a helicopter crash in ’79 at the age of 32, that was a tragedy. Steinbrenner’s passing, anticipated for several years, is, with due respect to his family, merely the end of one of baseball’s most colorful chapters.