Your guide to the 2010 Tour de France 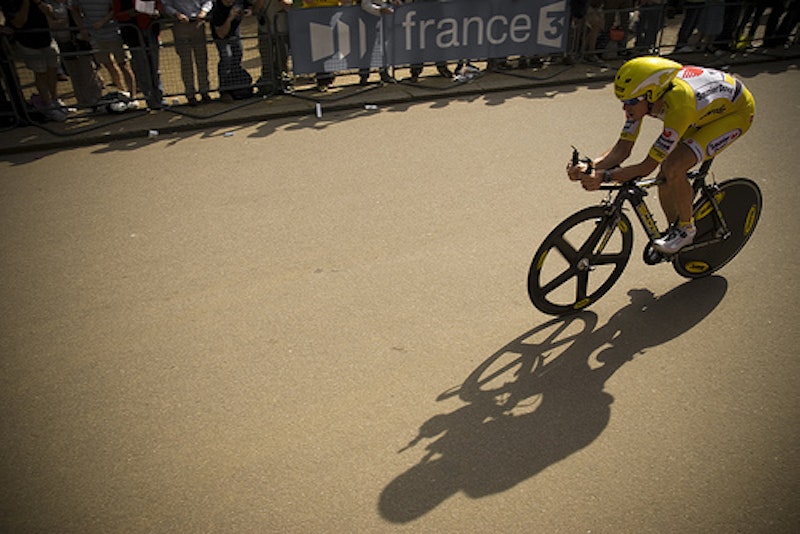 You may think that the Tour is horribly boring to watch, since it’s basically just emaciated Euros riding bikes. This is true (the Euro part), but the Tour also collects everything that American sports fans want—complex strategy, loyalty, betrayal and horrific suffering. And the Tour gives you these almost every day for three weeks. This year’s edition promises to be especially exciting, only in part because it’s probably Lance Armstrong’s last (though we’ve heard that before).

The Tour includes about 20 long stages (this year it runs from Rotterdam to Bordeaux), and the overall win goes to the rider with the best cumulative time. Winning stages is important but not critical—in theory you could win the tour with 20 second place finishes. The Tour includes flat stages, mountain stages, and time trials. Each kind of stage favors a different kind of rider; small, light cyclists do well in mountain stages, where they can climb quickly and without undue fatigue. Flat stages require large, powerful sprinters. Individual time trials separate the riders from their teams, force them to wear teardrop helmets that resemble the alien from Alien, and place them atop silly aerodynamic bicycles. They race alone against the clock.

You might wonder why the cyclists form teams at all, especially given that the prizes of the Tour go to individual riders. A Tour stage actually requires a great deal of cooperation, both within and between teams. In most stages the riders form a huge mass, called a peloton, with the strongest and most prestigious teams at the front where they can see well and are less likely to run into a fallen cyclist or particularly drunk fan. The peloton shields riders from the wind, which makes a huge difference in the amount of energy they use and the speeds they can reach (pro riders obsess over energy use the way dilettante cyclists obsess over carbon fiber parts). Powerful teams control the speed of the peloton, especially towards the end of the race. They will drive at a punishing rate to drop weaker riders off the back and prevent contenders from breaking away and “attacking,” pulling away from the peloton alone or in small groups.

An attack can happen at any time, and often riders (usually small names from less prestigious teams) will attack right from the beginning of a stage. Bear in mind that stages are mostly over 100 miles, and you’ll see why the famous riders are reluctant to exhaust themselves in a single foolhardy attack. Often the peloton will allow a weak attack (which can sometimes form a mini-peloton) to go on for miles and miles, hoping that the attack riders will exhaust themselves and drop back to be absorbed.

Teams also work together to deliver star riders to strategic positions. Leadout trains of two or three riders position their sprinters at the end of each stage—the leadout riders cut the wind for the sprinters so that their legs are fresh for the final few yards before the tape. Here the sprinters explode out of their teams for a few seconds of bike-shaking, crank-blowing power.

Many riders on the pro teams serve as “domestiques,” journeyman teammates who make the Tour easier for the star performers. They form the leadout trains, shepherd the big names up the mountains, and even fetch food and water from the team chase cars. Pro riders use a prodigious amount of energy, in the neighborhood of 15,000 calories on some stages, so they must eat (or at least swallow nutrient goo) during the race. So domestiques are critical, though they usually don’t expect to win any titles for themselves.

The Tour includes a variety of sub-competitions: the four jerseys (yellow, green, white and polka dot, for overall time, most points, best young rider and King of the Mountains respectively), most aggressive rider, best team, and (arguably) “lanterne rouge,” the award for the slowest rider who avoids disqualification (you have to finish within a percentage of the winner’s time or you go home).

You don’t have to understand any of this to enjoy the Tour, of course, since the main spectacle is the athleticism and suffering of the riders, and the general frenzy of the race. The suffering comes in two varieties: crashes (which have been spectacular and frequent so far this year), and the more subtle agony of endurance. I’ve been watching the Tour on television in HD and you can see the pain in the riders’ faces as they push themselves up brutal climbs. The frenzy is more diverse. Fans, mostly drunk, some in cycling kit or more imaginative costume, hurl themselves in front of the peloton, scream at the top of their lungs, wave flags or human babies in the riders’ faces, and generally terrify all the skinny little dudes who have come to France for the Tour.

Fans also obsessively offer water, which the riders will never, ever accept since it could be poisoned or, worse, laced with EPO or some other doping substance. This all takes place with the peloton traveling close to 30 miles an hour, interlaced with camera motorcycles and team chase cars loaded with extra bikes. Even on television it’s miraculous. It makes me think of Hunter S. Thompson at the Kentucky Derby.

A few riders to watch this year:

Lance Armstrong (RadioShack): Armstrong has won seven Tours, and this will likely be his last. Last year his Spanish Astana teammate Alberto Contador sandbagged him and broke away on a few stages (contrary to Astana’s plan), taking the overall win in the Tour and leaving Lance looking bewildered and lonely in third place. Armstrong has given a number of interviews in which he says only nice things about Contador but implies strongly that the Spaniard is as dumb as a bag of hammers.

This year the commentators are doing all they can to promote the Armstrong/Contador rivalry. Lance has left Astana for Team RadioShack, which includes incredibly strong riders like Levi Leipheimer, Chris Horner, and Jaroslav Popovych. Contador is now the Astana captain. Contador is only 27 years old, while Lance is 38. Contador has the power, while Lance must rely on his mastery of tour strategy to see him through.

Sylvain Chavanel (Quick Step): This French rider had a lucky break in the second stage (Brussels to Spa) when he attacked early on and then the entire peloton crashed like five times. Chavanel rode out the race by himself and finished three minutes ahead of the field. The commentators treated this as a heartwarming story about a journeyman rider who had a moment to glory in a stage win but shouldn’t really be taken seriously. Chavanel followed this with a spectacular breakaway in stage seven, which he also won handily and all alone—he may not win the Tour, but he’s putting in some mind-blowing rides.

Andy Schleck (Saxo Bank): An elfin Luxembourger, Schleck came in second overall last year and is a strong contender this year. His Saxobank teammate and brother Frank broke his collarbone in one of the crashes on stage three and is out, so viewers will miss out on the spectacle of the Schleck brothers mincing around holding hands and talking in unison.

Fabian Cancellara (Saxo Bank): This Swiss rider started very strong, keeping the yellow jersey for most of this year’s race. there were an angular Swiss handsomeness jersey he would win it every time. Cancellara got so mad about the crashes in stage two that he yelled at the entire peloton and forbade them to sprint for the finish, so they all came through with the same time.

Mark Cavendish (HTC—Columbia): Nicknamed “The Manx Missile” (really), Cavendish hails from the Isle of Man and is probably the world’s best sprinter. Early crashes and bad maneuvering left him stranded in the peloton, but he pulled out some classic sprint wins in stages five and six, after which he cried like a little girl. Famous for throwing tantrums.

Tyler Farrar (Garmin—Transitions): This young American sprinter hurt his wrist in one of stage two’s many crashes and despite high expectations has been having a truly lousy season, turning in a second place (behind Cavendish) on stage six and not much else of note. If his wrist heals he may come into play later in the Tour. Also, his team name, “Garmin—Transitions” always makes me think “Transitions: a gym for newly single women.” Transitions is actually an optics company. FYI.