Even With a Successful Post-Season, the Tampa Bay Rays Will Look Different Next Year

What will happen to Carl Crawford? 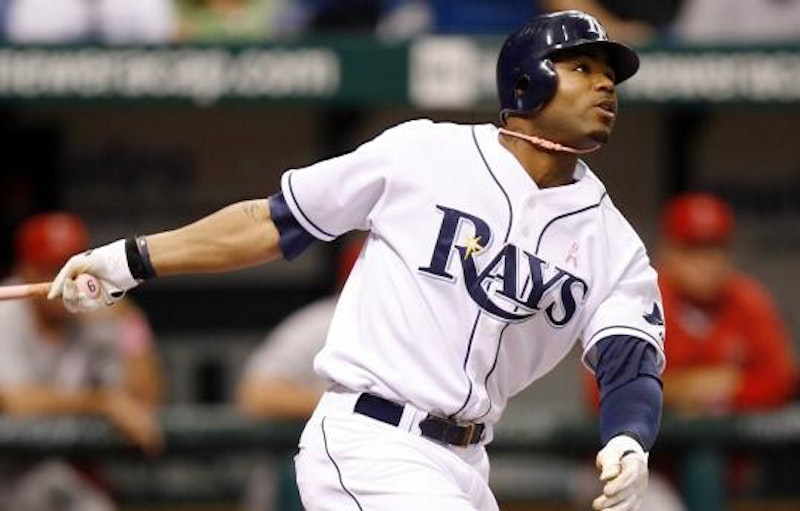 Tampa Bay Rays stars Carl Crawford, Carlos Pena, Rafael Soriano and Joaquin Benoit have something in common: they’re all free agents at the end of this season. General manager Andrew Friedman will be losing his speedy left fielder, slugging first basemen, lights out set-up man, and impeccable closer. Yes, there’s a slight chance of re-signing the players, but with severe payroll constraints, retaining even one of them is unlikely. The franchise’s skinflint owner will breathe a sigh of relief, since payroll will drop to around $40 million. There are silver linings for the hard-working Friedman, however: compensation draft picks will be awarded for each lost player as long as arbitration is offered and declined. Some of the Rays’ younger players, the future stars, will get more at bats and prove they’re worthy replacements. Finally, facing a turnover the roster, the Rays will be forced to make some interesting and risky trades before spring training.

Aside from Cliff Lee, Crawford is the most enticing free agent on the upcoming market. His type A status means that if the Rays offer arbitration, which they will, they’ll get two first round draft picks as long as the successful bidder finished in the top 15 in 2010. Soriano is also a type A while Benoit and Pena are type B's, which yields just one first rounder. Pena is currently flirting with dropping his B status altogether because of his poor performance this year, though an arbitration offer still seems unlikely. Crawford can expect serious courting from the Yankees, Angels, Red Sox, Giants, and White Sox; all of those teams, save the Halos, have had winning 2010 seasons.

The Braves may be interested in a reunion with Soriano because Billy Wagner intends to retire. As long as the Phillies continue to doll out huge, unnecessary contracts, he could fit right in. Brad Lidge hasn't been the same since 2008, and 2011 is the final year of his contract, so a back-loaded deal could work. If money is all Soriano’s after, and he doesn't insist on the closer's job, then the Red Sox and Yankees would love to add him to their depleted bullpens. It doesn't matter where Benoit plays next year because even if he signs with a team like the Orioles, the Rays still get their compensation sandwich pick. Unlike 2010, the '11 draft looks to be the strongest one since '05, which produced stars such as Ryan Braun, Troy Tulowitzki, Clay Buchholz, Justin Upton, and Andrew McCutchen.

Entering this season, the Rays had one of the strongest farm systems in the Major Leagues. It featured young studs like Desmond Jennings, Wade Davis, and Jeremy Hellickson. Davis has been inconsistent thus far, and he's currently on the DL, but I believe after a full year of adjustments, he'll become a better pitcher. He's not a potential ace like David Price, but an innings eater who racks up a 3.50 ERA in the AL East is extremely valuable. For years Jennings has been heralded as the heir to Crawford, and his time has finally arrived. The only tool he’s missing is power, and scouts agree that it ought to arrive (just look at Jose Bautista). Hellickson is now considered the best pitching prospect in baseball and he's not undeserving of this acclaim. None of his pitches completely overwhelm batters, but because he has four well above average ones, he makes every at bat a tricky guessing game. Because of this pitching surplus the Rays have the luxury of being able to trade one of their well-established hurlers, such as Matt Garza or James Shields.

Garza has more upside than Shields, but he’ll become expensive soon and will be a free agent in two years. Shields is cheaper and more controllable than Garza. His contract is attractive to other teams because it contains three option years after 2011 for $7 million, $9 million, and $12 million, respectively. If he doesn't perform up to expectations, a GM can just decline his option for the next season. It's still too early to tell who will be interested in Garza and Shields, but the Mariners and Franklin Gutierrez’s name have been floating around recently. I'd imagine that the Rays would be interested in a first basemen more than another outfielder, but Friedman’s creative and unpredictable.

Friedman is a genius at operating under a tight payroll, so Rays fans (those that they have) shouldn't be overly concerned. The Red Sox are preparing for a huge offseason revamp, and the Yankees will improve as they always do, so Friedman is in for a challenge. Judging by his team’s success in recent years, it appears he’s ready.