They've got nowhere to go but down. 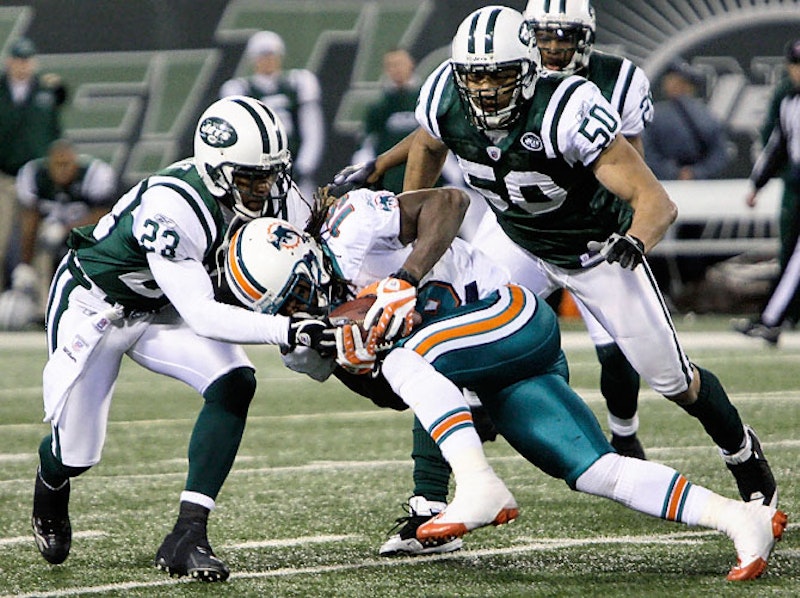 If the NFL awarded trophies for off-season hype, the bombastic New York Jets would already be hoisting the Lombardi. After spending the spring acquiring every available member of the 2007 Pro Bowl team, Vegas has set the Jets with 13 to 1 odds to win Super Bowl 45. Those odds put the Jets as a Top 5 NFL team for this season. Super-sized Coach Rex Ryan has been telling that anything less than a championship constitutes a failure. Someone may want to stuff a drumstick in Ryan's mouth before he makes any more ridiculous comments. He's already created the current Darrelle Revis holdout situation after blabbering about Revis being the best Corner in the league. Gee, I wonder why Revis now thinks he should be the NFL's highest paid corner.

I don't mean to pile up on Ryan, he's just made himself such an easy target. I was a big fan of Ryan when he was with the Baltimore Ravens. His defenses were always creative, aggressive (sometimes to a fault) and ready to play. But I’m glad that the Ravens didn’t choose Ryan as head coach. The Ravens were already established as a successful organization with identifiable players. John Harbaugh has been a perfect fit as the new public face of the team. The Jets, on the other hand, hadn't won a championship since Joe Namath’s days and needed someone to come in and give the team an identity. Ryan has clearly done that.

People seem to forget that the Jets were just 9-7 last year, and that was after the Colts and Bengals just rolled over and played dead in weeks 16 and 17. The Jets were 7-7 when Ryan essentially announced that his team was eliminated from the playoff race during a post-game press conference. Little did he know that Marvin Lewis and Jim Caldwell were about to deliver a gift. Granted, the Jets did get hot once the playoffs began as they knocked off the perennially disappointing Bengals and the annual paper champion Chargers. By the way, is there a softer contender in the NFL than the Chargers? Every year they roll into January after beating up on the Raiders and Chiefs and proceed to get smacked when the big boy football starts. LT hobbles off the field; Rivers get pressured into a dumb mistake; and the defense folds like a cheap suit.

Anyway, the Jets featured the league's top defense and number one rushing attack last year. They've since cut All Pro Guard Alan Faneca and lost 1400 yard rusher Thomas Jones to free agency. Jones was replaced with LaDainian Tomlinson and his 3.3 ypc. Faneca has been replaced by second round draft pick Vladimir Ducasse, from football hotbed UMass. Those two moves are massive downgrades and will only put more pressure on young QB Mark Sanchez. Some people were quick to put Sanchez into the Joe Flacco/Matt Ryan class of young signal callers after he led his team to the playoffs. However, Sanchez had a 12/20 TD to INT ratio and completed a paltry 53 percent of his passes. Sanchez will need to take a major step forward this season if the Rex Ryan All Stars have any chance to reach their own lofty goals.

The Jets defense could take a major step backwards this year. As noted above, All World Corner Revis is holding out for an enormous contract with no end in sight. Also, LB Calvin Pace is out for the season's first six games with a wrist injury. True to form the Jets brought in ancient pass rusher Jason Taylor and Antonio Cromartie, a former All Pro corner with a bad hip. Cromartie, at just 26, has already fathered nine kids with seven women, perhaps explaining his recurring hip condition.

I don't see how anyone can realistically predict the Jets to be much better than last year's 9-7. They're a .500 team with a weakened running game and their best player, Revis, is more prepared for his family's fantasy draft than the NFL season.