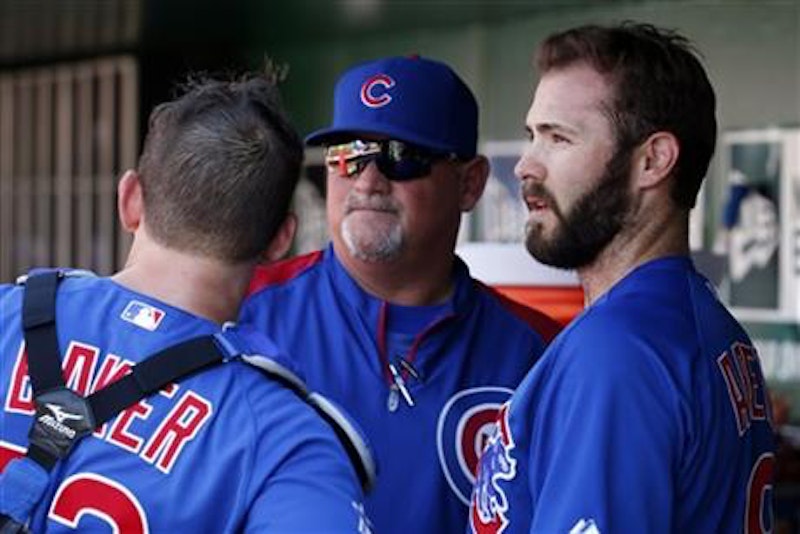 The North Side of Chicago has become a safe harbor for young hurlers in need of a change of scenery and veterans looking to prove themselves healthy on short-term deals. The Cubs added three more low-risk/high-reward hurlers in separate deals over the past month. Dan Straily, Felix Doubront, and Jacob Turner are all fairly young starters who pitched themselves out of the rotations in Oakland, Boston, and Miami respectively. The addition of those three pitchers follows a trend that Theo Epstein’s front office set when they moved to Chicago.

Epstein and company traded Paul Maholm to Atlanta for injured prospect Arodys Vizcaino at the 2012 trade deadline. Vizcaino has yet to pitch for Chicago but the 23-year-old reliever was having an impressive 2014 campaign before a recent stumble at Triple-A Iowa. The Cubs handed former Rangers starter Scott Feldman a one-year deal following his disastrous 2012 season. Feldman posted a solid half season for Chicago before he was flipped to Baltimore for a pair of confounding righties. Pedro Strop has emerged as a dependable power arm at the back end of Chicago's bullpen and Jake Arrieta has proven to be a revelation thanks to the tutelage of pitching coach Chris Bosio. Chicago was at it again earlier this season when the recently-signed Jason Hammel, another free agent on a one-year contract, was shipped to Oakland as part of the Jeff Samardzija trade. The Cubs received prized shortstop prospect Addison Russell as the centerpiece of that trade along with 25-year-old righthander Dan Straily. Straily had struggled for Oakland after two dominant stints in Triple-A.

While the 2014 A's and the 2013 O's simply didn't have the luxury of allowing struggling pitchers to work out their kinks in the big leagues the rebuilding Cubs have no such issue. The trade for Doubront provides Chris Bosio with another talented young pupil. Doubront won't pitch under nearly as much scrutiny in Chicago as he did with the World Champion Red Sox. Escaping the rough and tumble AL East for the more serene NL Central is another bonus for Doubront.

When the Marlins placed 23-year-old righty Jacob Turner on waivers last week the Cubs pounced on the once highly-regarded prospect. Just two years ago Turner was the centerpiece of a midseason trade that sent Anibal Sanchez from Miami to Detroit. Turner pitched well enough for the Marlins in 2013 to assume that he’d be a rotation building block. Turner struggled to a 5.97 ERA in 20 starts for the Marlins this season. While Turner’s ERA skyrocketed his peripherals remained solid and the various fielding independent pitching statistics say that his 2014 season was actually an improvement on last season. The Cubs dealt a pair of Single-A relievers to Miami in the hopes that Turner’s xFIP of 3.93 is a more appropriate indicator of his abilities. At worst Turner is a lottery ticket, at best he’s a valuable young starter who just needs a chance to pitch.

Chicago has also hit on Rule 5 draft pick Hector Rondon, Kyle Hendricks, and Neil Ramirez. Rondon was selected from the Cleveland Indians in the 2012 Rule 5 draft. After serving an apprenticeship at the end of the Cubs’ bullpen in 2013, Rondon has emerged as the team’s closer this season. Hendricks and Ramirez were both plucked from the Texas Rangers in separate trades. Hendricks was dealt to Chicago while pitching in Single-A as part of the 2012 Ryan Dempster trade. Hendricks was called up to Chicago last month and has gone 4-1 with a 1.73 ERA in his first six big league starts. Ramirez, originally the player to be named in last summer’s Matt Garza deal, has thrived in Chicago’s bullpen. The 25-year-old Ramirez has registered a fine rookie season pitching to a 1.26 ERA and WHIP of 1.01 in 28 2/3 innings.

I’d be shocked if Chicago didn’t make a run at Cardinals’ starter, and soon-to-be free agent, Justin Masterson over the winter. Masterson was a promising young pitcher when Epstein’s Red Sox traded him to Cleveland in 2009 for Victor Martinez. The Indians shipped Masterson to St. Louis last month in large part due to his 5.51 ERA. Just as Turner’s ERA far outpaced his xFIP Masterson’s xFIP is a solid 4.08. Masterson could be targeted as the Cubs next buy-low free agent pitcher. The 29-year-old could look to Chicago as a potential 2015 playoff contender and a decent landing spot to rebuild his value in search of a longer-term contract.

Epstein’ turned the short-term contracts of Maholm, Feldman, Hammel, Dempster, Garza, and Samardzija into more than 30 years of team-controlled service time for the likes of Arrieta, Straily, Doubront, Strop, Turner, Hendricks, Ramirez and Vizcaino. While the Cubs have used top draft choices and large international bonuses to stockpile an astounding collection of positional prospects the organization has taken a different approach to building a pitching staff. Chris Bosio has worked wonders with Feldman, Hammel, Strop, and Arrieta and the Cubs front office is hoping that he can turn recent buy low options like Straily, Turner and Doubront into viable rotation candidates. The Cubs are expected to chase after high-priced free agent starters like Jon Lester and Max Scherzer in the offseason to provide an anchor for a rotation long on promise but short an ace.