The Future of Baseball

I got a taste of it this summer, right in my own backyard. 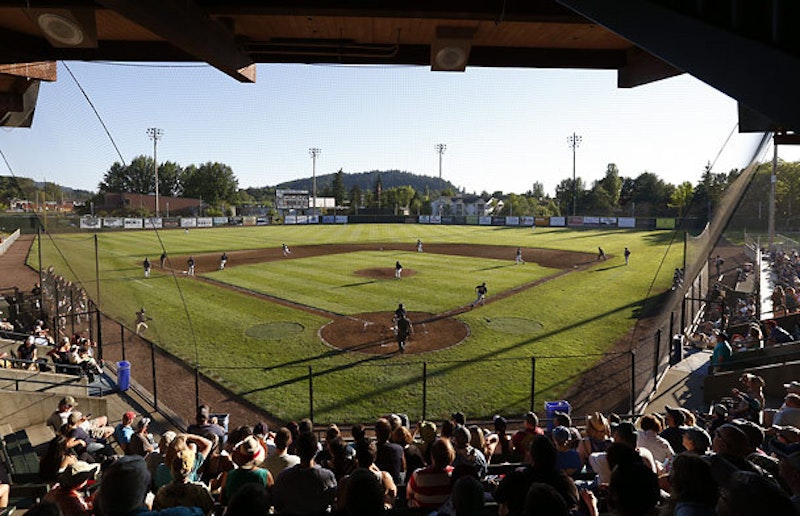 The West Coast League is a collegiate summer league that’s heavily scouted by MLB teams. The website boasts that since the League's “modest” inception in 2005, 210 of its alums have found their way onto at least farm teams and that in 2014, “23 players that have appeared in the big leagues this summer” played in this little known league first. There are several theories as to why MLB would care what goes on with teams such as the Cowlitz Black Bears, Victoria Harbour Cats and, my favorite team name, the Wenatchee Applesox.

Theory one: West Coast Leaguers use wood bats rather than college baseball's metal, so scouts get a better idea how they'll handle single A ball.

Two: the teams do some of the sorting for them, by recruiting the best talent they can get from all over the country.

Three: the players “self sort” by deciding if they want to keep playing baseball during the summer or do something else that more reliably pays down college loans. For the most part, these are the hardest of the hardcore college athletes who badly want a shot.

As I watched the final inning of the final game of the WCL championship Monday night, all of those theories made sense. Down by one, with one out and one runner on, visiting team and reigning champs the Corvallis Knights put in Joe Duffin to pinch hit. He swung hard enough to shatter the bat, splintering it all over the infield. It was one of those moments that baseball stats can't hope to capture. What's so-and-so's percentage for fielding the ball with dozens of potential tetanus shots flying at him?

Third baseman Dallas Carroll rushed in past the flying wood chips. He somehow managed to field the ball, look the guy moving off second back to the base and gunned it to first baseman Scott Heath for the out. One more almost anticlimactic out and the Bells were doing a celebratory dog pile in the outfield. Then came the Gatorade dump, the trophy hoist and the team pictures.

Between the dog pile and the mugging, the Bells got some familiar visitors. Every night that the Bells play at Joe Martin Field, in the middle of the game comes the announcement. All the children in attendance are invited to run with the team mascot, Dinger the Bellinghamster, across the outfield. The kids pour out of the left field gate and race across to exit field right, through a gauntlet of Bells players with high fives. It only seemed sporting to open that gate one last time and let the kids go congratulate their new heroes without delay.