Does Alabama want to continue their winning tradition? He's worth hiring away from Ole Miss. 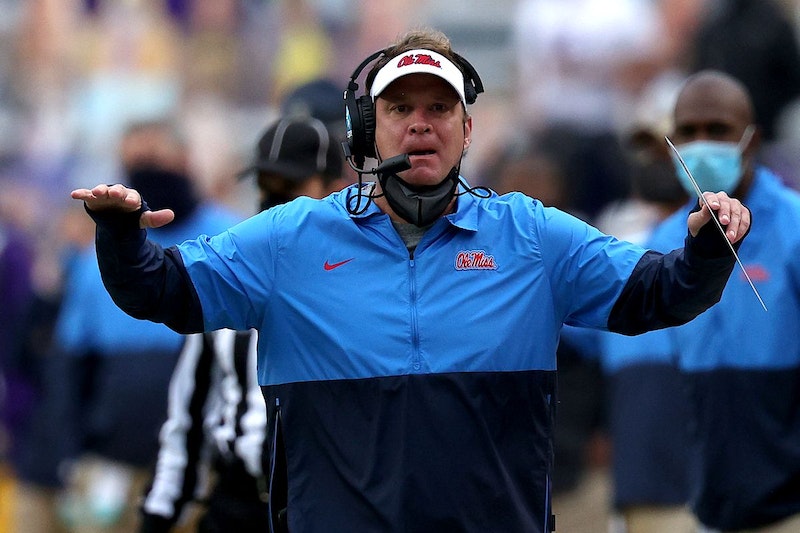 No one lives forever. Not even Nick Saban. The legendary football coach with a record of 262-65 turns 70 in October, and while he shows no signs of slowing down, Saban will at some point no longer be the head football coach at the University of Alabama. If I were Alabama Athletic Director Greg Byrne, I’d be mentally planning now for Saban’s replacement. Byrne’s job security depends on picking the right person to replace Saban. The likely and best successor to Nick Saban is located about 170 miles away from Tuscaloosa in Oxford, Mississippi.

Ole Miss Coach Lane Kiffin is a fit for the University of Alabama. Kiffin has name recognition. Kiffin does well with recruiting, has swagger, and most importantly, has the style of offense that can bring more national championship titles to Tuscaloosa. Kiffin has already proven his offense can work at Alabama, having been an assistant for many seasons under Saban. In 2014, Kiffin was a finalist for the Frank Broyles Award, something that goes to the country’s best assistant coach.

I’m not a graduate of the University of Alabama, nor did I attend classes at the University of Mississippi. Instead, I have a degree from another SEC school that has to play Ole Miss and Alabama annually. But if Alabama wants to continue winning in a not-too-distant future without Nick Saban, then ‘Bama had better roll into Oxford and offer Kiffin the keys to the kingdom. To do otherwise risks a return to the Mike Dubose, Dennis Franchione, Mike Price, and Mike Shula era. If you don’t recognize some or all of those names, it is because they didn’t do much at Alabama.

In 2020, Kiffin turned the Ole Miss Rebels into an offensive machine. The Rebels ranked 20th in the FBS in nine different offensive categories. The Rebels were the third best team in the country in for total offense thanks to a whopping 555.5 yards per game. Not bad for a coach that took over a terrible football team just a few months prior and had to deal with COVID-19 issues that affected rosters and practices. And Ole Miss also defeated a nationally-ranked Indiana team in the Outback Bowl.

Kiffin’s resume does include ups and downs at universities including Tennessee and Southern Cal. Before taking the Tennessee gig, Kiffin was head coach of the NFL’s then-Oakland Raiders. There was nothing to write home about from those coaching stops, but Kiffin learned his lessons while working under Saban in Tuscaloosa. That experience as offensive coordinator and quarterbacks coach won Kiffin a job at Florida Atlantic, a school known for racking up losses prior to Kiffin’s arrival. Following a 1-3 start in Boca Raton, Kiffin’s FAU team went on to finish 11-3 that season. Two seasons later, Kiffin had a record of 27-13 with two bowl game victories at FAU.

Kiffin’s a proven winner. That’s what Alabama Athletic Director Mal Moore thought about Nick Saban when Moore hired Saban away from the NFL’s Miami Dolphins. Saban’s record in the NFL might have been 15-17 after just two seasons, but he had a winning season in 2005 with a career backup quarterback in Gus Frerotte, and Saban dominated the SEC a few years earlier when he was coaching the LSU Tigers (48-16). Prior to his arrival in Baton Rouge, Saban had success at Michigan State (34-24) and Toledo (9-2).

Hiring Kiffin away from Ole Miss will cost Alabama a few million dollars to cover Kiffin’s buyout, but that’s nothing for one of the wealthiest athletic programs in the history of athletics. Does Alabama want to continue that winning tradition? The obvious answer is yes.