Thank God the Yankees still have all that money. 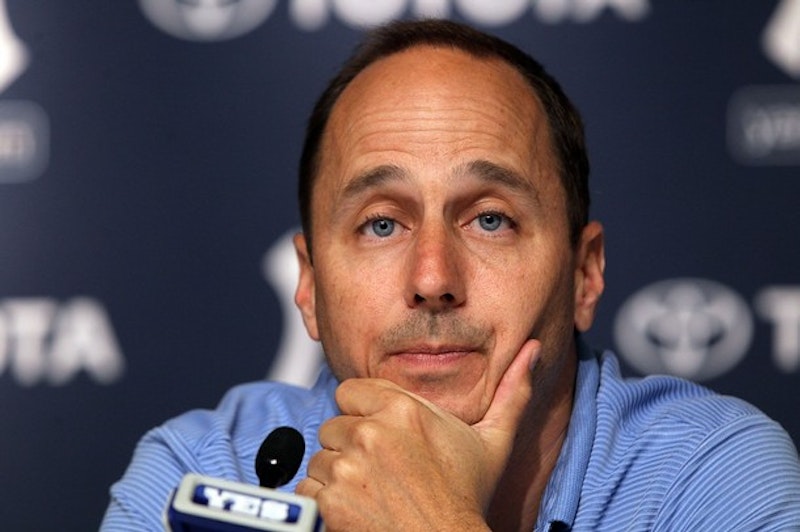 The Yankees always win, or so it seems. Whether it’s because of their deep pockets or tradition-rich charisma, every year they compete for a spot in the playoffs. Every year they start the season as one of the best teams in baseball, with no help from their overrated, overcompensated GM, Brian Cashman.

Cashman has been stuck in the middle ground of praise and ridicule for his entire career. One side argues that even a hobo could engineer a successful team with an enormous payroll, $207,047,964 million to be exact, but that’s not entirely true. If it were, the Cubs’ Jim Hendry and White Sox’s Kenny Williams wouldn’t be on the hot seat right now. The other side simply points to his win-loss record and four championships. Cashman isn’t bad because he has money to spend, he’s bad because of how manages the resources given to him.

Free agent contracts are the main source of New York’s talent. Every winter, the Yankees make a splash in the market by signing a high profile player to a high paying contract, whether necessary or not. Rafael Soriano, for example, is the definition of unnecessary. Granted, Cashman was against the deal and didn’t want to propose it to begin with, which would normally be the end of the discussion, but co-owner Hank Steinbrenner insisted that his team ink the now-setup man to the most player friendly contract for a relief pitcher in history. Cashman’s inability to convince his employer otherwise shows either his ineptitude regarding negotiations, or simply his apathetic attitude towards the franchise. The latter isn’t all that ridiculous when you consider the fact that 2011 is the final season of the GM’s most recent extension. After a 13-year long tenure with the Bombers, Cashman might be fed up with all the publicity and stress that comes with the job. If he’s about to leave the Bronx, he must be thinking: “In a season when they’re obviously going to make the playoffs, who really cares about giving up a first round draft pick in order to pay a reliever $10 million to ride the bench?” In an offseason where a number of GM positions will be vacant, hiring ballclubs should steer clear of Cashman, because he has more holes in his resume than Swiss cheese.

Not every move he made was bad though, so I’ll start out with his strengths.

Trades: In recent seasons especially, the Yankees have engineered a few relatively small scales trades that have had a huge impact on the major league roster. In 2005, “The Great Gillick Giveaway” netted them Bobby Abreu for first round pick C.J. Henry and a trio of unimpressive minor leaguers. Nick Swisher was taken from the White Sox after a disappointing season for utility man Wilson Betemit (who’s having a fine 2011 with the Tigers) and two mediocre prospects. Ian Kennedy and Austin Jackson, who were involved in the Curtis Granderson trade, have both become productive major leaguers, but not to the extent that Granderson has. Now tied for third in the majors with 28 home runs, C-Gran become one of the most valuable center fielders in the game. The GM has made his fair share of mistakes, too, having shipped away now stars Tyler Clippard, Jose Tabata, and Phil Coke.

And that’s it. Those are all of Cashman’s redeeming qualities as a general manager.

Of all the players the Yankees have drafted since 1998, one of them has represented New York in an All-Star game. Of the 10 position players that have been developed via the draft under Cashman’s rule, Brett Gardner is the only one of note. They have fared better in the international market, however, having graduated Robinson Cano and Alfonso Soriano.

Mark Teixeira and CC Sabathia are often used as the example as to why the Yankees are so successful. They have the financial flexibility to sign franchise players to mega-deals, and they’re often criticized for it. But what they should be criticized for instead is their signing of non-impact players to similar sized deals. Jason Giambi, AJ Burnett, Rafael Soriano, and Jorge Posada (After his BABiP inflated 2007) are only the recent money pits. And when they finally do acquire/develop good, young players, Cashman thinks it best to go year-to-year with players, rather than locking them up long term for a cost controlled amount. Just because the Yankees don’t have to make smart business decisions, doesn’t mean they shouldn’t. Cano should be extended as soon as possible, but instead management is going to wait for his current deal to expire and then happily pay him $170+ million in the free agent market.

New York is a perennial contender because of the money they spend, not because of a competent General Manager.