Some Ravens expats and no one to quarterback. 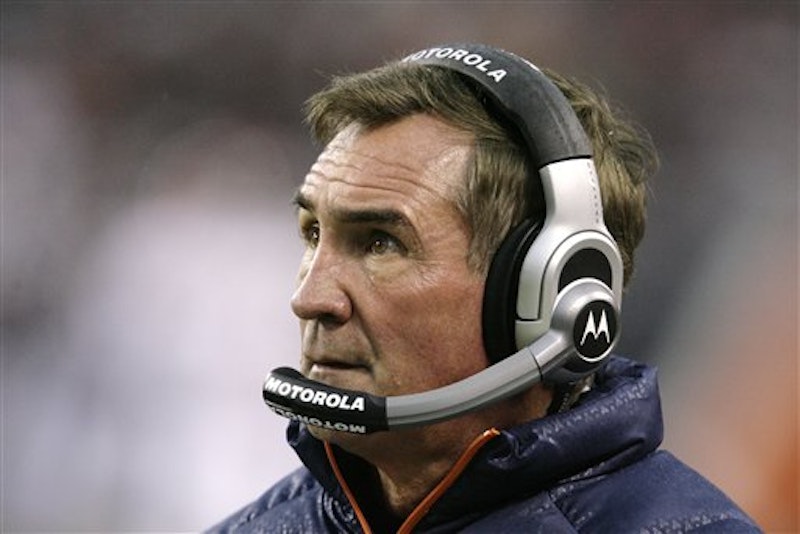 Mike Shanahan arrived in Washington, D.C. last offseason with much fanfare. He brought two Super Bowl rings and a winning track record. The hope from the fan base was that Redskins owner Daniel Snyder would stop meddling and trust Shanahan and GM Bruce Allen to do their jobs.

As this crazy week of NFL transactions wraps up 'Skins fans may be praying for Snyder to step in. Washington spent much of the past week giving multi-million dollar deals to former Ravens reserves like Chris Chester, Donte Stallworth and Josh Wilson. When they weren't preparing to play like Ravens the Redskins were cleaning up last season's mistakes. The Donovan McNabb and Albert Haynesworth debacles were resolved with each of them traded out of town.

The only thing more curious than the moves Washington did make was the one it didn't. Currently the scattershot Rex Grossman and inexperienced John Beck, another former Raven, sit atop the Redskins' quarterback depth chart. Washington dealt McNabb, passed on free agent Matt Hasselbeck and doesn't appear to be interested in Denver’s Kyle Orton, who's rumored to be on the trading block. On Friday Shanahan addressed concerns over the quarterback position, “I believe in ‘em. And I’ve been doing this for a long time. And I put my reputation on these guys that they can play."

I can only assume that someone in the media checked Shanahan for a lobotomy scar after the comment. Grossman is a turnover about to happen and Beck quickly washed out in both Miami and Baltimore. Having ridden the coattails of John Elway to a couple of Super Bowls Shanahan certainly knows what a good quarterback looks like. He must also know that neither Beck nor Grossman have that look.

It's possible Washington may be looking at 2011 as a lost season and Shanahan simply made the comments to divert attention from his signal callers. A move for someone like Hasselbeck or another season with McNabb at the helm likely would have resulted in a middling finish for Washington this season.

Stanford Junior QB Andrew Luck is the presumed top pick in next April's NFL draft. Luck is an impressive prospect who’s been favorably compared to Peyton Manning. According to most scouts Luck is considered to be the league's next great quarterback. A 6-10 or 7-9 record would leave the Redskins out of the running for Luck and no closer to real contention. A crash and burn with the combo of Beck and Grossman could give Washington a shot at drafting the next Peyton Manning.

The Redskins are not be the only team taking early aim at Luck. The Seattle Seahawks may have an even worse quarterback situation than Washington. It's almost inconceivable but Seattle's starting quarterback will be either career backup Charlie Whitehurst or fallen Viking Tavaris Jackson. Seahawks coach Pete Carroll is riding high on last season's stunning playoff appearance and upset of the defending champion Saints, but he must know that sustained success in the league is tied to the quarterback position. Unlike Shanahan, Carroll hasn't staked his reputation on either of his lackluster QBs. At least not yet.

Matt Hasselbeck had a great run in Seattle but his best days are in the rear view mirror. He was allowed to take what's left of his talents to Nashville. Carroll will need to find a franchise quarterback to compete in the NFC West with Sam Bradford set to lead the Rams for the next decade and Kevin Kolb as the newly minted starter in Arizona. Whitehurst and Jackson certainly look like placeholders. Perhaps they're just keeping a spot warm for Andrew Luck. Even if winning the Luck sweepstakes isn't the intention the Seahawks don't figure to be more than a three- or four-win team this season.