Why do Preakness Stakes organizers think the crowd is clamoring for Buckcherry and ZZ Top? 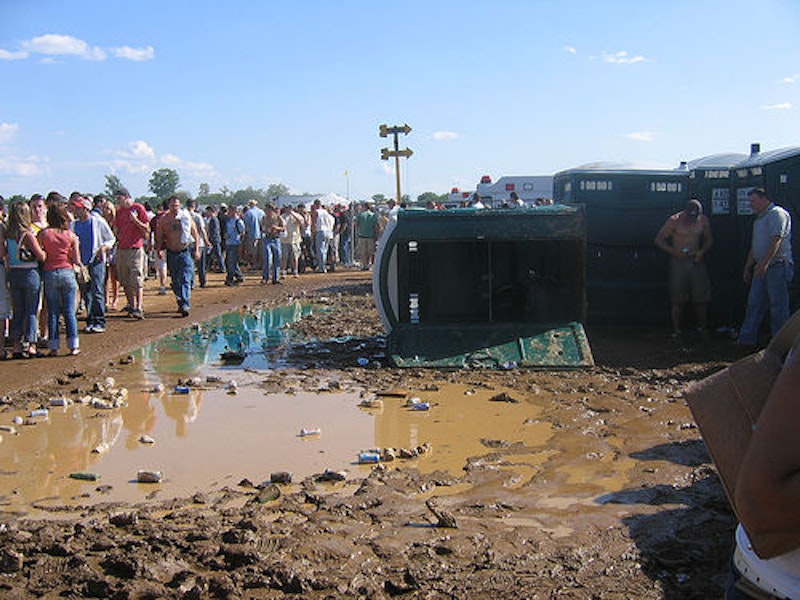 The Preakness is the time of year in Maryland that blurs the line between man and beast. Growing up, it was a one-day event in between the school year and summer jobs, one where you could start drinking at eight in the morning and get lost in pure, guilt-free vice. College students swarmed the infield in the early hours of morning, wielding their cases of beer and lawn chairs, and by 10 a.m., that kid who made such thought-provoking, insightful comments in your political theory class could be seen shirtless and getting pummeled by beer cans as he sprinted across a row of port-o-potties. Vendors sold $9 Black-Eyed Susans to underage kids without even glancing at a fake ID. Skoal set up a tent and dealt out early addictions by the handful, free of charge as long as you put your name and e-mail address on their mailing list.

Like Shakespeare’s Globe, there was a visible class division between the grandstand and the groundlings. I could never see the details of the grandstand too clearly, but I always imagined the spectators as Monopoly Man-type characters, sipping their Mint Juleps and commenting on tax reform while shirtless cretins bludgeoned each other in the mud below them. The infield was a cesspool of spilled beer, vomit, dirt, and sweat and it was glorious.

Then in 2009, the year of change, the madness died. In early February, the Jockey Club announced that outside beverages would be prohibited at the 2009 Preakness Stakes, replaced by $3.50 beers sold at various stands throughout the infield. This reform wasless than surprising following the ban on outside beverages in the grandstand in 2008, but it was tragic nonetheless. Grandstand ticket sales plummeted by about 10,000 in 2008, and, anticipating the violent backlash that would inevitably come from swapping tradition with capitalism, the Jockey Club plans to completely revitalize the image of the Preakness, giving the Baltimore-area youth what they really want: ZZ Top, a professional women’s volleyball tournament, a displayed NASCAR vehicle, Guitar Hero tournaments, and Buckcherry. I had to check several sources to make sure this last one wasn’t a joke. It’s real.

But it gets worse. In addition to the traditional beer and hot dog stands that will line the infield in 2009, the Jockey Club will also provide four oxygen bars (an urban phenomenon I have never understood nor hope to) where for some assumedly ludicrous price, quasi-Manhattan yuppies can take their hits of sweetly flavored O2. That’s where I drew the line. I could possibly handle the crowds of handlebar-mustached ZZ Top groupies headbanging to “Tush.” I could tolerate the beer-bellied NASCAR fans drooling at the volleyball court and “Gittin-R-Done.” And though I would try to stand as far away from them as possible, I could even manage a few Buckcherry songs here and there. But although I’ve never vomited at Preakness, that streak would be broken if I saw oxygen shots being taken in the infield.

While I consider these reforms a travesty, I still find it hilarious that the Jockey Club was forced to go to such lengths to attract an audience. They’re aware that horse races are never about the horses. They’re about shared experiences with your friends in a big patch of dirt and if you see a brown blur race past you at one point in the day, great. If not, nothing is lost.

But what’s even more ridiculous is the Jockey Club’s rationale behind commercializing the Stakes. In an article published by the Baltimore Business Journal, Seth Hurwitz, the chairman of concert promoter I.M.P. said, “I think the potential is here to make this as desirable as the Super Bowl halftime event.” Not only is it egregious to assume that the halftime show is the reason people buy Super Bowl tickets, but if this is the Jockey Club’s line of reasoning, then they’ve delivered a lackluster effort. They’re attempting to make the Preakness akin to the annual Virgin Festival—also held at the Pimlico Race Course each summer—but the appeal factor doesn’t even come close.

It’s safe to assume this will be a failed experiment. If ticket sales dropped by 10,000 in the grandstand (where one can assume that attendants have at least a mild interest in the actual race) I’d expect the sales for infield spots to take an even bigger nose-dive. Facebook groups planning to boycott the Preakness are already gathering nearly thousands of members and while those figures may hold no distinctive clout, I still haven’t spoken with one person who plans on buying a ticket in May.

From a legal standpoint, the Jockey Club’s reforms may make sense. Seventeen Preakness attendees required medical assistance in 2007, and 126 more were ejected for raucous behavior. I would be nervous if, some day, my children decided to participate in an eight-hour long tailgate. But at the same time, I still hate to see a tradition die. The Preakness has always been Baltimore’s Mardi Gras. It may have been dangerous, foolish, and slightly grotesque, but it was honest. One didn’t need rock bands, professional sports, or any form of organized entertainment to have a fun time. Just good friends and good weather. And beer.