Pitchers and catchers are reporting to camp this week, so Splice talked with one of Baltimore's longest-standing baseball writers about his predictions for the season and his wallowing team. 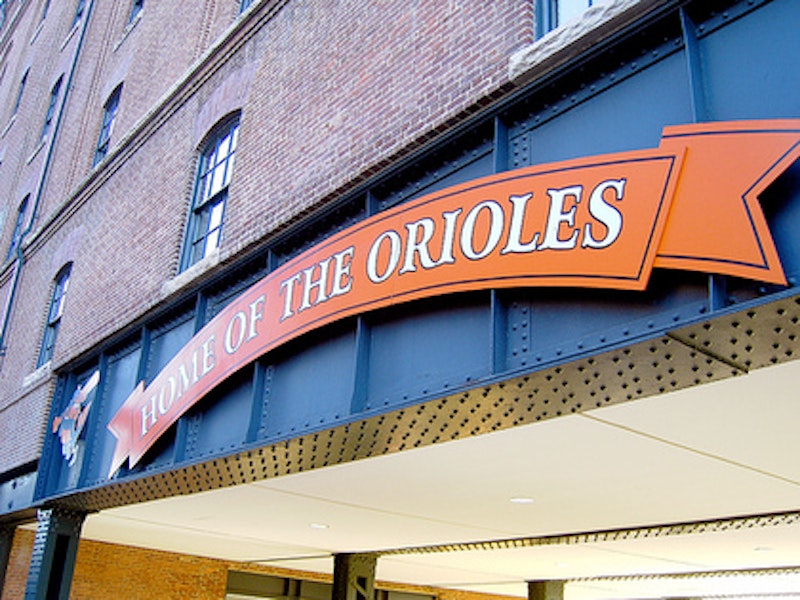 The Baltimore Orioles, once considered a first-class Major League Baseball franchise—doing it “The Oriole Way” was an expression often heard among MLB general managers—have now suffered 11 consecutive losing seasons, with no relief on the horizon. One of the few O’s sportswriters and fans who remember when the team was competitive is Peter Schmuck, who’s been a sports columnist for The Baltimore Sun since 1990 and has also written about baseball for The Los Angeles Times. Schmuck, 53 is one of few pleasures in following the sad-sack team, with his jocular, self-deprecating but insightful columns. He writes the entertaining blog “The Schmuck Stops Here” in addition to longer-form articles and his talk show on WBAL-AM. Splice caught up with Schmuck a week ago at the O’s spring training camp in Fort Lauderdale and he offered some opinions about the upcoming baseball season.

SPLICE TODAY: Down and dirty: Where do you expect the Orioles to finish in A.L. East standings this year? Is there any scenario that lifts them out of the cellar?

PETER SCHMUCK: I really don't see the Orioles finishing anywhere but fifth, but Andy MacPhail has turned over the 40-man roster and there is some unpredictability built into the offensive lineup. The pitching, however, remains very thin, so they would have to catch lightning in a bottle to overtake the Toronto Blue Jays and finish fourth. Impossible? No. Likely? Not really.

ST: In a recent Sun column you advocated that MacPhail make every effort to lock up fan favorite Brian Roberts for the next three or four years, following the example of the superb outfielder Nick Markakis. Why would Roberts, who isn't getting any younger, want to finish his career on a team that realistically won't be in the hunt for the foreseeable future? Aside from purely mercenary players, don't most of them want to at least be in a pennant race and hit the post-season at least once during their career?

PS: Sure, every player wants to compete, but Brian is taking some risk by waiting for free agency. He's a thirtysomething player whose value would plummet if he suffers any significant injury this year. If the O's are willing to put $44 million on the table for four years, I think he has to think long and hard about leaving. There are no guarantees wherever you go.

ST: What new player who MacPhail acquired during the off-season do you think will shine brightest in '09? And is Adam Jones ready for a breakout, All-Star caliber season?

PS: I don't believe Adam Jones makes the All-Star team this year, but I think he will be at least a Mike Cameron-type player in a year or two. He's got a chance to be an Eric Davis-type superstar if all goes well. I believe the acquisition of Ty Wigginton will shine the brightest this year.

ST: Attendance, or lack thereof, for '09 must be keeping O’s owner Peter Angelos awake at night (at least one would hope so). Do you think it's likely—unless the Birds go strong out of the gate—that '09 will be the worst year for attendance in the history of Camden Yards? An example: I go to a lot of games at the park, but this year relinquished my partial season ticket—field level, first base side—in the interest of austerity, and figuring I'd pick and choose as the season wears on.

PS: Not only do I think this will be the worst attendance year in the history of Oriole Park at Camden Yards, I'd be willing to bet my house on it. The economy combined with the 11 straight losing seasons, spells maybe 1.6 million this year, which can only hamper the club's future efforts to improve.

ST: On the culture of Camden Yards: Why is it, that even though Baltimore is a very affordable city, at least on the East Coast, that when you pony up to the concession stands and buy a beer, Coke or dog, you feel like you're in New York with the high prices? And on a larger scale, do you think attendance will nosedive throughout MLB, with the exception of Yankee Stadium, Fenway Park and Wrigley Field (or whatever it winds up being called: maybe Geico Stadium)? I can't imagine, say, the Pirates or Padres or Rangers being a big draw.

PS: The concession prices at Camden Yards are pretty standard. I don't think they are higher than Dodger Stadium or Petco Field. I wouldn't be surprised if the new Yankee Stadium debuts with the first $10 light beer. Overall, I believe attendance will drop this year because of the economy, but not dramatically. History has shown that during bad economic times, people still need their diversions.

ST: A few seasons ago, in '05 (pre-Rafael Palmeiro steroid revelations), when the O's were off to a great first half, you had a lot of fun kidding about "Jimmyville," with now-MASN personality Jim Hunter. Did he ever take that joshing personally or were you guys on good terms?

PS: Jim Hunter loved the "Jimmyville" columns. Jim doesn't shy away from his rose-colored glasses. He's a great guy and we've been friends for a long time. Jim is really the reason I'm on WBAL. We had a blast doing the “Hot Stove Show” in the old days.

ST: I won't put you on the spot and ask about what current Oriole players are like to talk to before and after games, but in the past, what players have you enjoyed the most? Who made you crack up, who made you think deeper thoughts than just about a well-executed double play, and who was the most fun to be around?

PS: We've been fortunate in Baltimore. I would have trouble singling out one or two players who were better in the clubhouse than others. Without slighting anybody, I think I liked Ben McDonald the best of the 1990s players because he
was so nice to my kids in spring training. Chris Hoiles is a great guy. Jamie Moyer was a real gentleman. I like B.J. Surhoff a lot and still see him around. Cal [Ripken] was good, though he was always swamped with media. Mike Mussina was a great interview when he wanted to be. Kevin Millar was great fun. But again, I'm slighting people because I could list about 50 guys. I like a lot of the guys on the current team—[George] Sherrill, Melvin [Mora], Roberts, Jones, Luke Scott and I could go on. Tough question to answer completely.

ST: Is spring training your favorite time of the year, and if so, why?

PS: Yes, I love spring training because it's warm and relaxed and great fun both from the working environment to the social life. I have had the privilege of covering many springs in Arizona and Florida and both have their advantages. It's just a great time of year. Can't believe that this will be my 30th spring training... and I don't look a day over 35.

ST: If the O's could, in a parallel world, have their pick of three players to add to their roster, whom would you choose?

PS: Another tough question, especially in light of recent news [Alex Rodriguez’s admission of steroid use]. If you’re talking just about on-field performance, I would take A-Rod, Ryan Howard and Brandon Webb.

ST: Despite Manny Ramirez's problems with the Red Sox on and off the field, and though it would deviate from MacPhail's future plans, wouldn't it make some sense to sign him to a one- or two-year deal? The guy would bolster the offense and probably put a lot of butts in the seat.

PS: No, I don't think so. Never mind that he would never sign with the Orioles because they aren't in a position to compete with the Red Sox and Yankees; he would cost $50 million over the two years when the Orioles aren't expected to be particularly competitive. Can't imagine they could recoup that from additional attendance related to his acquisition.

PS: Bull Durham and The Natural (in book form).

ST: Favorite baseball reporter/columnist, either current or past?

PS: Longtime Los Angeles Times reporter Jim Murray, though he was never specifically a baseball guy. Great writer. Great sense of humor. Great human being. Great everything. I was privileged to work in the same press box with him on many occasions after growing up reading him. That's among the greatest highlights of my career.

ST: Leaving aside the O's, and say you're a lawyer or accountant and not a sportswriter, what MLB team would you pay to see because it's an exciting club?

PS: Obviously, I would pay to see the Yankees, though I probably couldn't afford a seat at the new stadium. And I really enjoyed watching the Tampa Bay Rays last year.

ST: Why in the world does MLB Commissioner Bud Selig make so much damn money?

PS: Because he's one of the most successful CEO's in the business world. Major League Baseball reported $6.5 billion in total revenue last year, which works out to an average of $201 million per team. That's about three and a half times the revenue the players and owners were fighting over when Bud had to cancel the 1994 postseason.