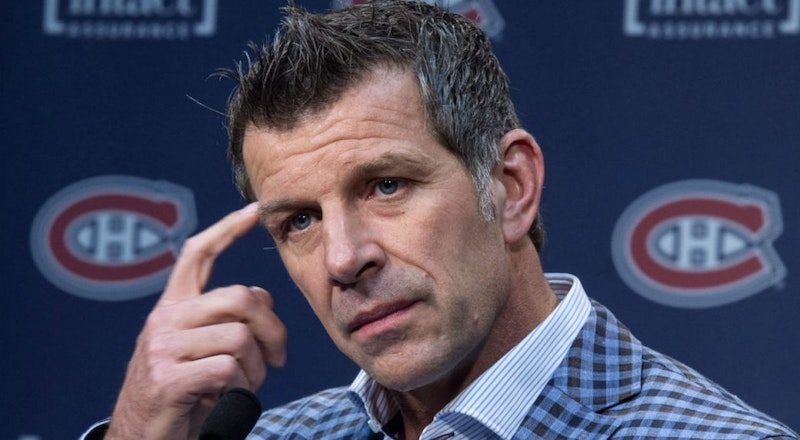 We now know, if there was any doubt, that Marc Bergevin is a loser. But so what?

Following the end of the Montreal Canadiens’ season, in which the team missed the playoffs and ended up 27th in the NHL, Bergevin held a press conference in which he refused to specify what changes would be made in the organization, and insisted that the problems with the team derived from their “attitude.” It wasn’t hard to find commentators who disagreed with him.

Going into the past season, Bergevin had constructed a team without a first-line center, and really without a second-line center either; meanwhile, an off-season rebuild of the team’s defense corps left the Canadiens without a top-pair left defender. Bergevin had hoped David Schlemko, a 30-year-old journeyman who’d rarely played regularly in the top-4 of an NHL team, could carry the load. As it’s said, hope is not a plan.

Bergevin apparently never heard that observation, and perhaps Geoff Molson, the Canadiens’ owner and Bergevin’s boss, didn’t either. He’s given Bergevin a vote of confidence.

To recap: The Montreal Canadiens were the fourth-worst team in the NHL this past year. The year before, they won their division but then bowed out in the first round of the playoffs. The year before that, they were terrible, finishing 22nd in the league. Molson’s reaction: So what?

At this point, I don’t know that I have an answer.

Bergevin took over the team after the 2012 season. At that point, the Canadiens had a strong young core, including Carey Price, P.K. Subban, and Max Pacioretty. Brendan Gallagher was about to emerge. And there was a third-overall draft pick waiting for Bergevin, which became Alex Galchenyuk. Andrei Markov was still an excellent player, though it was clear that before long a replacement would be needed for a top left defenseman. More pressing was a need for a top-line center, someone who would let Tomas Plekanec drop down to the second line and Lars Eller to the third. Theoretically, that would be Galchenyuk, sooner or later.

What’s happened since? Price and Gallagher have done well, though Price now has a contract that eats up over $10 million against the salary cap. Subban was traded for an older and lesser player. Pacioretty had one of his worst statistical seasons, and may well traded shortly with his value at its lowest. Markov left to play in Russia—and in six years, Bergevin has yet to find a replacement. Nor has Bergevin found a center; age caught up to Plekanec this year, but Bergevin insisted that Galchenyuk should only play wing, going so far as to trade top-quality defense prospect Mikhail Sergachev (who briefly looked like he’d be Markov’s replacement) for star winger Jonathan Drouin, who was then obliged to play center.

Bergevin was unable to build around the core he inherited. That core’s now aging out of their prime, and some have already been traded. New assets have arrived, largely thanks to the work of the Canadiens’ amateur scouting department, but even with yet another third-overall pick in their near future, the team’s got at least as many major holes now as it did when Bergevin took over.

Bergevin’s end-of-year press conference couldn’t address all these issues. And there’s a limit to what any general manager can say in public, given that they don’t want to throw anyone else on their team under the bus. I hoped for some sign that Bergevin or Molson recognized how bad things were. Some hint, not of self-criticism, but of honest self-awareness. Instead there were platitudes about attitude—other people’s attitude.

I wanted a hint that Bergevin recognized that his basic philosophy of the game was flawed. A recognition that he’d undervalued certain things, and wildly overvalued others. Instead there was talk from Molson about the history of the team (always an irrelevant distraction), and talk about building a winning culture, and promises to be better. The problem is that blathering about an unacceptable status quo or how the Canadiens are the most storied franchise in the NHL do not bring change. The idea that attitude is more important than a well-built team of talented players is a guarantee of repeated failure.

Molson did say that changes off the ice for the team would have more to do with how things were done rather than in changing personnel (since the press conference, the Canadiens have fired two assistant coaches and the coach of their AHL affiliate, hired a replacement assistant coach, and let their assistant general manager take a higher-level job for another team). Unfortunately, Molson mentioned the team’s communication with fans and the in-arena experience, rather than the team’s way of evaluating talent. Molson argued that the team’s done well statistically over the last five seasons; ignore what happened four or five years ago, though, just look over the last three, and you see something different.

The press conference was an exercise in evasion. Asked about his pro scouting, Bergevin talked about the proper expectations for players, implicitly defending his scouts. It felt desperate; it felt like two well-off but anxious men finding ways to avoid saying what they didn’t want to say.

As a fan, somewhere along the line you have to acknowledge when there’s no hope for your franchise as it’s presently constituted; and, beyond that, when there’s no hope the current management team will be able to execute the teardown-and-rebuild that’s called for. In the 1990s I watched a Canadiens general manager ruin his team, whether through incompetence or penny-pinching. It took his removal, an ownership change, and several long years before the team really rebuilt. At this point, I’m afraid that’s what it’ll take before the Canadiens will see any success again. And there’s no sign Molson’s interested in selling.

I’m looking at a long gray future of poor-to-mediocre results, hoping I’m wrong. I’d like, at some point to say that I was mistaken. The problem is, the men in charge of the team aren’t willing to make the same admission.