A Fan's Crucible of Pain and Loss

How rooting for the Phillies—with all the pain and baggage associated with the team—creates more diehard fans than the Yankees will. 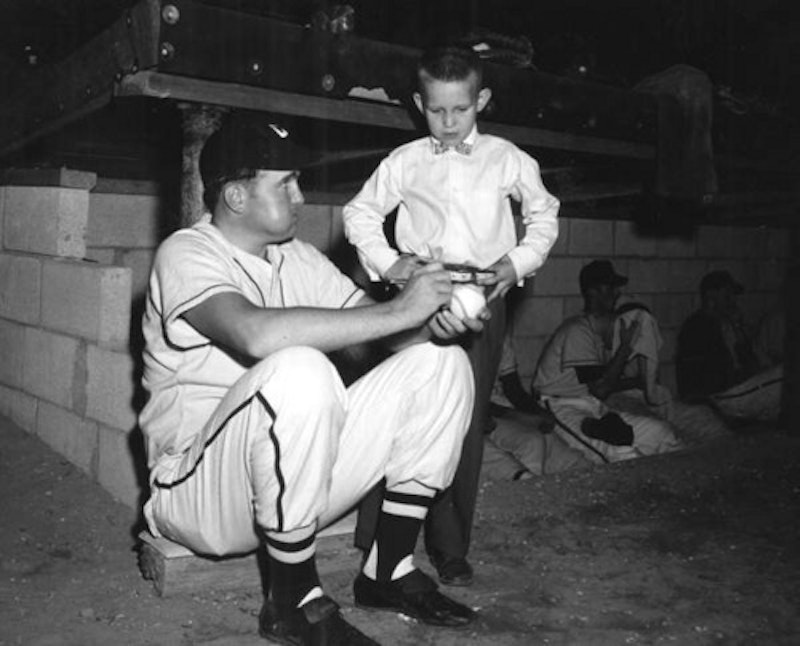 State Library and Archives of Florida

I grew up rooting for such legendary (at least in Philadelphia) Phils as John Kruk, Darren Daulton, Curt Schilling and Mitch (Wild Thing) Williams. I remember vividly the Phillies' heartbreaking World Series loss to the Toronto Blue Jays in 1993, even though I was only in grade school at the time. I remember the hatred we Philadelphians experienced when the New York Yankees rolled off four championships to close out the 90s—hatred, of course, that we directed toward our own team.

The Phillies were so bad during the second half of the 90s that the Yankees' success bothered us much less than our own ineptitude. We sucked, and we knew it. It didn’t help that the Braves were in the midst of their remarkable string of 14 consecutive National League East titles.

Throughout the 1990s and early 2000s, Phillies fans remained eternally hopeful and consistently disappointed. When we drafted J.D. Drew with the second overall pick in 1997, fans believed we had found our superstar of the future. When he refused to sign with the club and instead re-entered the draft, eventually signing with the St. Louis Cardinals, we expressed our anger by throwing batteries at him when he next played in Philadelphia. Scott Rolen, a bona fide star, spent seven years in Philadelphia. During his tenure, the Phillies did not make the playoffs, and in 2002 Rolen was traded to the Cardinals. Pat "The Bat" Burrell was yet another superstar-of-the-future. Taken with the first overall pick in the 1998 draft, he never developed into more than a decent hitting, poor fielding left fielder.

We did not know it at the time, but the 1993 World Series loss would mark the beginning of a 14-year playoff drought. Fourteen years! Nearly an entire generation of Philadelphians had not been alive when the Phillies last made the playoffs. And yet, like a drug habit, we got our hopes up every year, and every year we were disappointed. The annual destruction of an entire city's hopes and dreams reinforced a particularly Philadelphian phenomenon: We booed the hell out of our team.

If a player hit a home run in his first at bat, we would cheer. If he struck out during his second at bat, we would boo. If the Phillies beat the Mets during April, we would believe that this was finally our year. When we lost to them in May, we would demand that the manager be fired. We behaved like a domestic abuser: "We are only viciously booing you because we love you. If you weren't so terrible we wouldn't treat you so horribly." This pattern continued for years, with Phillies fans' insecurities and doubts threatening to drive us insane. Our venom spread outwards from our team to opposing fans, players, umpires, the media—anyone associated with the sport of baseball was a deserving subject for abuse.  It was not classy; it was barbaric. Opposing players hated it; even some of our own players hated it.

But then something remarkable happened. In 2007, the Phillies made the playoffs for the first time since 1993. Of course, we were swept from the first round and all of our crushing insecurities threatened to overwhelm us. But we came back strong in 2008, and as everyone knows we won the World Series in 2008. Words cannot describe the sense of joy, and also of relief, that swept over Philadelphia fans. For the first time in 28 years, the last thing that Phillies fans would do before the offseason would be to attend a parade and cheer our hearts out.

In 2009, the Phillies found themselves back in the World Series against the eternally successful New York Yankees. New Yorkers love to tell you how much they love their Yankees. You cannot go an entire day in Manhattan without seeing dozens of examples of Yankee paraphernalia. In fact, you probably cannot go an entire day anywhere in the Western world without seeing a Yankees hat or t-shirt. With so many fans, one would assume that the Yankees could easily fill their stadium with 68,000 raucous, hard-core, dedicated fans. Especially for Game Six of the World Series.

You would be wrong.

I was lucky enough to have a ticket to Game Six. I was very excited for what I hoped would be a thrilling Phillies victory. I was told by many New Yorkers not to wear any Phillies garb in order to avoid trouble. Not wanting to cause a disturbance, and knowing that a Yankees jersey in Philadelphia is equivalent to a target, I heeded their warnings.

Our seats were very good: right at the foul pole in left field, on the lower level. I was surprised and admittedly a bit pleased to find that our seats, and every other seat that I could see in the stadium, had thick foam pads on the seat and the back. Imagine, seat cushions in a baseball stadium! Yankees fans, I thought, must have extraordinarily sensitive butts. In the row behind me, I was happy to spot a Phillies fan in a bright red jersey. Man, I thought, he is going to get hassled! The stadium seemed to be sold out—there were even people filling the seats behind home plate.

As the game got underway, there was precious little to cheer about. The Yankees never trailed, and the 7-3 score felt larger than that. The fans in our section high fived each other and tried to do the same to me but I rejected them with a "Phillies fan" reply. They frowned, but nobody said anything. In fact, even my red-clad Phillies friend escaped abuse. The worst heckling he experienced was a drunken fan a section over: "Hey Phillies fan! Lets go Yankees! Let's go Yankees!" I repeat: that was the worst.

As the game progressed and became increasingly out of reach for the Phillies, I was intrigued at the relative silence of the crowd.  Of course the stadium was loud when the Yankees scored. And if Andy Pettitte ran the count to 1-2 with 2 outs, the fans would stand up and cheer loudly. But if he threw a ball, the stadium would hush and everyone would sit back down. The most inspired chants, by far, were the "Who's your Daddy?" jeers directed at Pedro Martinez. But after he left following the fourth inning, the fans were at a loss. The only time the crowd really started cheering was in the ninth inning, as Mariano Rivera shut the door on the Phillies' 2009 season.

I'm sure that the quiet crowd can be partially explained by the lopsided score and the fact that people who've spent $1000 on tickets are probably not going to be the most raucous of fans. But I think the main reason has to do with the fundamental difference between Phillies and Yankees fans. The latter explain away their relative quiet by saying, "we're classy." But the real reason Yankee Stadium is a safe place for a Phillies fan is because Yankees fans just don't care as much as Phillies fans do.

I have a friend who, in my experience, is a typical Yankees fan. Through the entire spring and summer he does not mention the Yankees very often, other than to say "Yankees won. Nice." And yet, during the World Series, I heard from this friend more often than I heard from any other: "Hate to say I told you so" was the text message I received after Game Six. He is a Yankee fan not because he loves the team, but so that when the Yankees win he can be an asshole about it.

It was that type of fan who filled Yankee Stadium during Game Six. They were happy when the Yankees won, but their happiness was superficial and fleeting. How can the achievement of a 27th championship compare to the first in 28 years? For Yankees fans, there is no sense of foreboding, no sense that this could be their last shot at glory for the next 30 years. If the Yankees didn't win this year, they would have shrugged and said, "Well, who are the free agents this year that we can sign to huge contracts?" How can you appreciate athletic achievement if your path to success has been so consistent, so predictable?

The Yankees are a great organization, and they had a great team this year. But in many respects, the obvious difference between the passion of Philadelphia fans and the bandwagon smugness of Yankees fans cheapens what should be a proud moment in Yankees history.